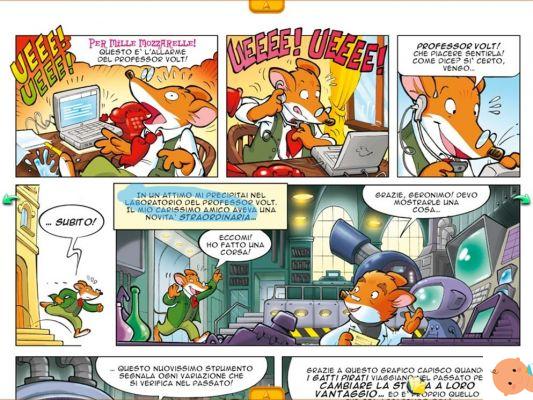 The importance of reading for children and for children it is a message that should be conveyed from an early age: reading must in fact be recognized as a fundamental role during the growth process. Bringing kids closer to it with comics is undoubtedly a winning move.

«What distinguishes the comic from the classic tale - explains Dr. Giorgetti - is the close correlation between the word and the image which helps the reader both to have a fluent reading and to expand his imagination by imagining the movement of the scenes between one cartoon and another ».

The X Men, Wolverin, Flash, IronMan, Capitan America and so on and so forth. The Marvel or DC comics are those dedicated mostly to the adventures of superheroes: "par excellence, good, ready to do anything to defeat evil and protect the community, superheroes are an example of integrity and correctness perfect for youngsters who are preparing to reading ".

The comic follows in the footsteps of the US television series that tells the adventures of Finn, a XNUMX-year-old boy (at the beginning of the series) and his best friend Jake, a dog with magical powers such as being able to enlarge, shrink or transform into numerous forms. Finn and Jake live in the post-apocalyptic land of Ooo. "This comic teaches the genuine and special relationship that is created between humans and animals: the two protagonists always live all adventures together and face situations while always remaining united".

The protagonists of this comic are the semi-humans, called "Ajin" and they appeared for the first time 17 years ago, on a battlefield in Africa. For their abilities, they are considered a threat to humanity and every time an Ajin appears, governments intervene by force to capture it and make it a test subject. «The stories of the Ajin are designed and studied in detail, for this reason children will find reading this comic particularly stimulating and will keep them glued page after page ».

Literally "Dragon Ball" in English is a manga written and illustrated by Akira Toriyama. The Dragon Ball universe features a large number of inhabited planets and extraterrestrial species. Another big difference from the real world is the presence of dinosaurs and anthropomorphic animals. Humans themselves are capable of developing telekinetic or superhuman abilities, giving rise to energetic or other blows. "Manga are the comics that teenagers like the most and the merit goes to the drawings, the type of stories told and the events described in detail and at the same time very fluid and smooth: in this way the reading will be lively and never boring. ".

The story follows the adventures of the young pirate Monkey D. Luffy (whose body took on the properties of rubber for having ingested the fruit of the devil Gom Gom) and his crew, in search of the treasure of the pirate king Gol D. Roger: the One Piece. A story that is made up, number after number up to the grand finale. "The credit for the success of this comic is also due to the cartoon of the same name that has fascinated children and young people all over the world".

Written and drawn by Masashi Kishimoto and published since October 1999, Naruto is a Japanese manga. The plot follows the adventures and vicissitudes of the young Naruto Uzumaki, who, starting as an inept ninja and gradually becoming stronger, tries to change his world, pursuing the dream of becoming a hokage. "Dedication, hard work and discipline will lead the protagonist to realize his dreams, thus teaching the children the importance of constancy".

Loosely based on the novels about the gentleman thief Arsène Lupine written by Maurice Leblanc, Lupine III is a comic that kids like. "Compelling stories, characters characterized to perfection e stories of intrigue: that's why Lupine III is one of the most suitable comics for children and adolescents ».

It is a comic series written and drawn by Leo Ortolani and published by Panini Comix. It mainly contains the stories of Rat-Man, the lucky character born from the author's imagination. "Rat Man is a witty comic, like its protagonist: irreverent, nice and funny, leaves the kids completely fascinated and glued to the pages, managing to make them smile page after page ».

Blue leaves you speechless for the surprising technique that combines thetraditional watercolor to digital coloring, but also for the captivating story, vaguely autobiographical, which "wants to be a point of reference and a hand to cling to for many young people who often find themselves dealing with a period of strong changes and transformations. It is perhaps even more so for girls who are preparing to become women ». One of these young women is called Aqua and she is the protagonist of the story: Aqua is changing in an incomprehensible way. She turns to Dr. Beatrix, to whom to have her help when she is no longer able to manage the situation of changing her body which, day after day, becomes foreign and alien, disturbing and suffocating.

The characters interact mainly in a generic middle-class suburb of any US town, with many houses, each with its own small garden, apart from a few exceptions such as the summer camp where the children move. Adults never appear. The style is minimalist without backgrounds or summarily dashed. «A great classic among the classics of comics that never tires and amuses thanks to the minimalism that never tires».