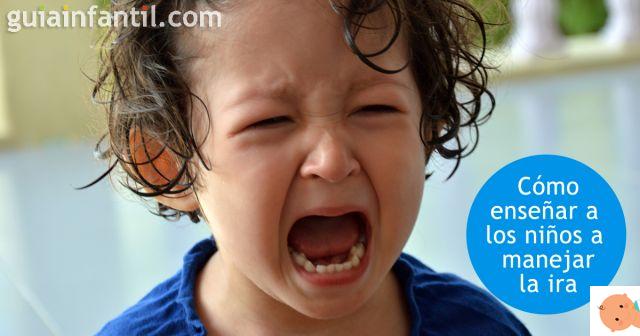 Anger in children: what it is and how to manage it

La anger it is an uncomfortable emotion, difficult to manage, but fundamental for the emotional and social development of children, who are the first to be frightened by that malaise that assails them: a sort of monster that invades them. There anger produces an increase in blood pressure, a rise in neurotransmitters linked to stress and a lowering of those linked to pleasure. When a child is very angry he cannot put himself in the other's shoes and, typically, physically lets himself go.

Sometimes he feels helpless in the face of his own children's outbursts. And bewildered. Because you have the feeling that neither the sweetness nor the hard punch succeeds contain those outbursts of anger and calm them down. And you are assailed by a thousand questions and feelings of guilt: if they scream, shout and throw themselves on the ground kicking because they really don't want to hear about our no to the request to buy snacks or a new toy, better to satisfy them, ignore them or scold them? Francesca Broccoli, psychologist and psychotherapist, in the book "Let him get angry" (Sparrow & Copper) guide parents a understand and deal with the anger of boys and girls.

Here are some tips for managing anger in children.

Anger management is a milestone in the growth of our kids. Here are some tips to share with them from the American website WebMD

Read also: 5 tips to educate children about anger thanks to mindfulness

How to manage the emotion of anger in children?
Responds in the podcast under Sperandeo, Clinical Psychologist of GuidaPsicologi.com

Boys and girls must be helped to manage moments of anger. How? Cuddles, hugs, caresses, smiles and kind words they raise oxytocin levels. And, as the author of the book explains, when the levels of oxytocin are high in the body, low levels of confrontation and violence are found: this hormone in fact counteracts stress and characterizes the states of pleasure and fulfillment. In fact, some children manage to calm down thanks to a hug, which is both containment and contact, and allows to calm the agitation caused by the access of anger. But the hug works if the adult is calm and the child is not in a panic attack. The affectionate gesture can be accompanied by sweet words, with a reassuring and soothing voice.

2. If he screams and kicks

Punishing a child angry does nothing but raise the levels of norepinephrine (a stress-related substance), making it even more prone to yelling, stomping, throwing objects recklessly, etc. This motor manifestation of anger it is perhaps the most difficult aspect to manage and the most embarrassing if you are in a public place. But the child who goes in escandescence it must not be repressed: when he feels anger he must discharge it and instinctively he does it with his body. Rather, he must be helped to release tension in a safe and harmless way for himself and for others. For example, encouraging him to jump quickly on the spot by counting, take a run in the yard, throw a pillow on the floor or give a blow to the mattress. In the face of an outbreak of anger, then, do not ask the child to calm down: at that moment he is unable to do so and in any case, it would probably infuriate him even more. You will reason together at a later time: when calm has returned. Nor do you scream: raising your voice only stimulates his oppositional reaction even more.

For small children, biting is a natural gesture. After all, the mouth is a means of getting to know the world. But growing up, the bites become manifestations related to frustration: they bite when they get angry, because they still cannot express themselves through verbal language. Once this skill is acquired, the bites should thin out until they disappear. Also because if in the first 18 months or so, the child cannot realize the consequences of the bites, at the age of 2 and certainly at 3 he is able to understand that biting hurts. So if he continues to use the bites, to the detriment of words, we must understand why he does it and, in any case, firmly reiterate that he does not bite. And it is necessary to repeat it every time the opportunity arises, without deluding oneself that once said the ban is enough forever.

4. If you don't want to tidy up the room

Sometimes the legitimate request to fix the bedroom can trigger the anger of children. Better not to engage in a sterile arm wrestling and not to use only the rewards / punishments system. The grueling script of calls and screams from room to room to get him to tidy up isn't very effective. Instead, it is more useful to communicate in a calm and clear way what is expected (all the games scattered on the floor must be placed in the basket) and even more to make everything a fun challenge (who will be faster today in collecting the games?)

5. If you don't want to do your homework

Sometimes homework can become a real battleground. To avoid unnecessary hostility, it is useful to establish routines before and after carrying out the tasks and to create a comfortable environment: his bedroom, the living room, the kitchen, as long as it is a well-lit place without distractions. If the rejection is related to a peak of tiredness, for a particularly busy day or time, or to temporary situations that involve a great emotional commitment and distract from school, you can reassure the child that he will make it, encourage him and not show himself. at first overly agitated or worried. And while remaining firm on the need not to neglect school commitments, you can plan some pleasant activities to compensate for the increased fatigue. If, on the other hand, not wanting to do homework is a constant over time, punishing or scolding the child is counterproductive.

First of all, it is necessary to try to understand if the refusal is linked to the fact that he has not actually developed the cognitive skills necessary to meet the school demands: for example he may have a specific learning disorder or a visual defect, diagnosed which can be adopted the strategy more adequate. Or if it is due to the fact that he feels insecure, feels unable to do them himself, etc. Any emotional discomfort has an impact on attention and concentration, therefore on doing homework serenely.

6 - If you really don't want to wear that dress

Sometimes you don't have the energy, in the morning, to face a son or daughter who refuses to wear the clothes you have chosen and who, before going to school, messes up the drawers and the wardrobe to choose others. . In the race against time it can be a difficult situation to manage. So, to avoid furious scenes, better prepare your clothes the night before involving them in the choice between a range of three alternatives at most: because if there is a need to discuss it is better to do it in the evening and not in a hurry in the morning.

7. If brothers and sisters quarrel

I fratelli they quarrel. Point. And that doesn't mean they don't love each other. Feelings and behaviors of rivalry, jealousy and hostility go hand in hand with love, solidarity, empathy, complicity. Because within the relationship between siblings there is room for the whole range of feelings and emotions: you are both allies and rivals at the same time. Parents should not take sides for one or the other, but encourage their children to clarify and to explain their reasons, so that everyone listens and takes into consideration the point of view of others. And they must give them time to work out a solution to the conflict.

When episodes of anger occur, don't label your children as angry and short-tempered, but try to understand the state of mind that lurks behind that behavior. In short, we must not identify the boy or girl with his anger and her impulsive reactions.

9. Don't respond to his anger with yelling

It is important to avoid responding to negative behaviors dictated by anger with screams, punishments, threats and devaluations: they end up reinforcing the anger and triggering mechanisms in the child that amplify a negative perception of self.

Read also: Tantrums: 25 phrases to say to a child to calm him down

10 - Do not leave an angry child alone

When a child is very angry, it is important to be around him. The presence of the parent tells him that he respects him and understands his state of mind, also accepting that emotion that is so unpleasant, and that, after all, is stronger than his anger. However, it happens that some children do not want their mom or dad to stay with them during an outburst. And this choice must be respected. Then when the waters have calmed down, you can try to understand why they asked to be alone.

11. After the outburst, talk about it

After the fury, to encourage children to listen to themselves and their emotions, talk about what happened and what triggered the anger: in short, anger must become an object of dialogue. In fact, for children to learn to regulate their moods and related manifestations, they must understand that the expression of anger is legitimate, which like all other emotions must not be inhibited, but listened to and managed. It can be good then to encourage him to identify this emotion in a flesh and blood character, in the Madam Anger who sometimes comes and turns everything upside down, makes a great show, but then goes away.

In order to make it easier to understand that he or she is not the anger he legitimately sometimes feels and that it is a phenomenon that has an end. Another way to talk about anger is to read books and stories together with angry children. They solicit identification with the protagonist, with the adventures, the inconveniences, the ups and downs and the solutions that take shape page after page. And after the reading you can comment together and ask which part you liked and which not, and why.

Read also: Basket of anger: what it is and how to use it

What is the Montessori Calm Jar?

The jar of calm is a tool inspired by Montessori pedagogy and useful for calming an agitated and stressed child.

Is anger really that bad?

Anger is one of the main emotions children can experience in life, and as such it is not only inevitable but sometimes even necessary.

What to do when a child gets angry?

Parents must avoid screaming and losing control when the child is in a rage. Responding to anger with more anger does not solve the problem, rather it amplifies it.

add a comment of 11 tips to calmly manage children's anger