25 baby names that make you think of summer 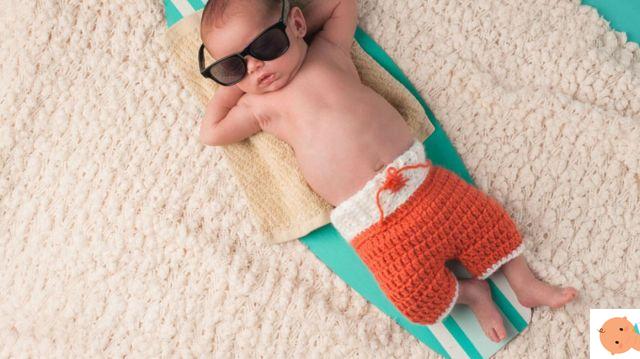 Summer is a wonderful season. And it is also a condition of the soul. For this reason, giving a boy or girl a name that refers to the elements (sea, sun, sand ...) that distinguish the summer period is a good omen.

Here are 25 names that refer to the three warmest and happiest months of the year.

1) Alba is a name linked to the birth of the sun. It comes from the Latin adjective albus, which means "blond, white".

2) Alyssa is a name of Greek origin, the meaning of which is that of "nymph from the sea".


3) Ariel means "powerful". The name day is October 1st. Ariel's name was used by Shakespeare for a character in the play "The Tempest". Walt Disney used this name for the animated film "The Little Mermaid".

4) Azzurra, name inspired by the color of the sea. It comes from the Persian lazvard, the name of a precious stone, the sapphire. It came into use only recently, from the beginning of the twentieth century.

5) Delfina derives from the word delphis, "uterus", or it can mean "coming from Delphi" or indicate an honorary title given to the lords of the Dauphiné. The name day falls on December 24th. The name Delfina suggests the famous marine cetacean, which in Greek mythology was particularly dear to Apollo.

7) Elena is a euphonic name that is with a sweet and harmonious sound. Just as harmonious is the personality of the many baptized Elena, who are all of a good league and… energy!

8) Eleonora. The meaning of her is "grown in the light".

10) Summer. Not yet very popular in Del Paese, although the trend to use the names of the seasons is increasing. Much more used Summer, which brings to mind the bright sun and warm weather.

11) Light. Euphonic name in both masculine and feminine ... Like "wings", like "moose" it hovers in the wind reverberating light, warmth, feeling. A treasure of humanity.


12) Maria Sole. Sóle is a very euphonic name (sweet and delicate sound). Just add an "i" to make it a nice Greek anagram with the same meaning: Elios. In short, it is an 'all-light' name and whoever wears it will never cease to illuminate and… illuminate others as well.

13) Marina derives from the nickname Marinus, from Marius; it can also be associated with marinus, "he who comes from the sea". The name day is celebrated on June 18 and July 17. A variant is Marinella.

15) Nerissa comes from the Greek and means "daughter of the sea".

16) Ocean. Okeanos is, in mythology, the Greek god from whom all waters are generated. Sant'Oceano is celebrated on September 4th.

17) Ondina (or Wave). The Undines (name coined by Paracelsus) are fantastic creatures, half woman and half fish, like mermaids, which have inspired fairy tales, legends and even an opera, Catalani's Loreley, where there is a dance of the Undines.

18) Pearl. Affective name, reminiscent of the sea pearl, given as a wish for beauty and virtue.

19) Shamsi in Arabic it means "my little sun" and is widely used in Morocco.

20) Sole is a "all-light" name and whoever wears it will never cease to illuminate and… illuminate others as well.

21) Soleil is a French variant of Sole. It is a fascinating name and is very popular in the United States.


22) Soriana is a name that in Cambodian refers to the "brightness of the sun" and inspires generosity and great openness.

24) Teoma: in Thaiti this name means "rising of the sun".

COULD IT BE INTERESTING FOR YOU:

TAG:
Audio Video 25 baby names that make you think of summer
26 things to know about breast and bottle feeding ❯