A dog in the family 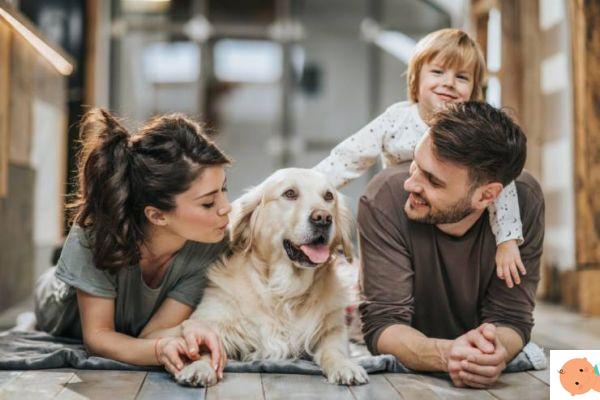 During the dog's developmental stages we will have several aspects to consider in his relationship with children. For example, i puppies they are very active and get aroused easily. They also use their teeth and paws to play and explore and tend to steal objects they find within their reach, even those of the child.

Il adult dog, who sees his home "invaded" by a newborn, can perceive the child in different ways according to his character, his past experiences: dogs that tend to have anxiety problems, that get stressed easily or that are very sensitive, they can see the child as an intruder who disrupts their routine and their environment; all this can trigger further anxiety in the animal.


In these cases, stress and anxiety-related behaviors may begin to appear, such as urine marking in different parts of the house, or starting to mount owners, children themselves or objects. Dogs can appear very agitated and more nervous than usual. READ ALSO: Dog and children, tips for a safe coexistence

Other times the child can be seen by the dog as something that belongs to the owners or a competitor in the search for attention: in this case the animal can manifest behaviors that can be interpreted by the owners as "jealousy" and "spite", but which in reality they are manifestations linked to the fear of losing such an important resource as the attention of the owners themselves. (READ ALSO: HOW TO CHOOSE THE HOUSE DOG)

For dogs that during their development (particularly during the socialization phase between 3-4 and 12 weeks of life) have never come into contact with children, these may appear as an unknown thing to be avoided and therefore manifest varying degrees of fear of them.

Ultimately, for those dogs that have a strong predatory instinct, children can be seen as prey, precisely because, especially when small, they make sounds more similar to those of a prey rather than those of an adult person and the same say for smells and movements.

Any dog ​​behavioral problems such as aggression can obviously complicate things, precisely because the child is unable to read the signals emitted by the dog. To deal with and prevent these situations, Belgian researchers created an interactive DVD (The Blue Dog) for children between the ages of 3 and 6. It is a game designed to teach children the correct way to relate to dogs and how to correctly read and interpret their communication system.


Also in adulthood, particular physiological situations such as heat, pregnancy, are critical phases, because the bitch can be more reactive and, immediately after giving birth, even more aggressive (protects the puppies). READ ALSO HOW TO MAKE A DOG ACCEPT THE ARRIVAL OF A NEWBORN

Particular attention should be paid to older dogs: this is certainly a very delicate phase of the dog's life. The dog is less active, less tolerant and less willing to play; furthermore, the pathologies linked to aging (arthritis, deafness, visual difficulties, pains, insecurity, fear, etc.) can make the animal more nervous and worried. The child does not understand the tolerance limits of the elderly animal.

Towards the child, the elderly animal may consequently manifest direct aggression (e.g. from pain caused by contact with the child), or indirect aggression (e.g. from fear because it may have associated the child with a situation for him painful and therefore manifests aggressive behaviors to prevent the repetition of a contact or interaction that is painful for him). The presence and supervision of a parent can certainly prevent various problems and facilitate the dog's relationship with the child.


TAG:
A puppy as a friend ❯

Rabbits and babies: everything you need to know

Dogs and children: how to get them to get along?

How to choose the house dog?

Dogs and children, 6 myths to dispel and useful tips

Dogs and children: the most suitable breeds?

Peppa Pig effect: children want a pig in the house instead of the dog

add a comment of A dog in the family