A high school reorganized on the model of Finland? 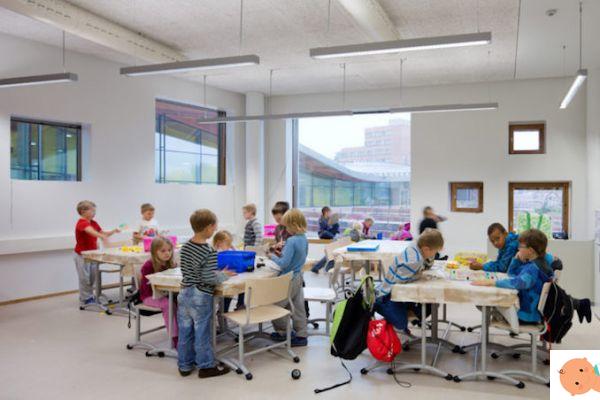 A redesigned high school on the Finnish model.

This is the vision of the Group of of the city, the organization of professors that since 2005 is committed to proposing new solutions for the renovation of the Del Paeseno school system.

According to the teachers, in fact, the current system of promotion and rejection based on the succession of classes and vintages can go well up to the first cycle, but afterwards they would take over. different educational needs, centered on the inclinations and learning times of the various pupils

"[...] If at the end of the year more subjects are" subscribed "(as often happens) to avoid the rejection, perceived by many teachers as a draconian measure, the student takes with him unfilled gap - the Group writes in the press release - If the student is not promoted, he will have the opportunity to fill those gaps, but at the price of also repeat the subjects in which he had had positive results, with the real risk that distrust and demotivation will prevail ».

Read also: why the school in Finland is the best in the world

How then to solve this problem? With a radical change of perspective.


Instead of promoting, or failing, for years you should proceed by level courses (Del Paeseno first level, Del Paeseno second level, English first level etc ...), as happens in Finland.

In this way a student lacking in algebra could repeat the course mathematics without interrupting progress in other subjects.

Read also: The transition to secondary school: how to help your children

"At the end of each course, an exam ascertains the candidate's preparation. If the pupil does not pass it, it will be possible to allow him to take him again after some time, as happens in the Finnish school; in case of further failure, will have to take the course again».


In this way, concludes the Group of the city, unnecessary stagnation would be avoided, which very often lead to abandon premature school careers, a particularly widespread phenomenon in the country where - according to estimates by All-school - in the last ten years alone, 28,5% of students has not completed his higher education cycle.

add a comment of A high school reorganized on the model of Finland?