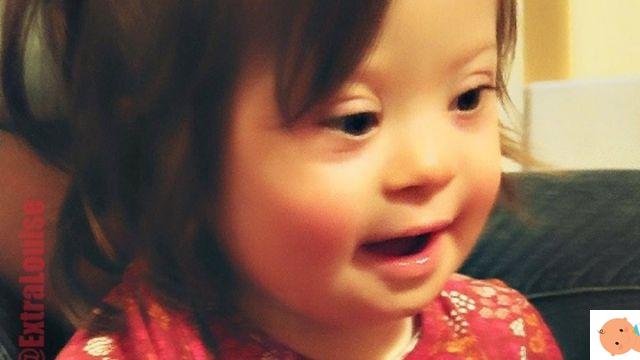 It took a little over a year to make this decision. But she took it. And she wrote a touching letter to her gynecologist.

Courtney Baker has been the mother of a girl with Down syndrome for 15 months. Her name is Emersyn, Emmy, and she is a special child. When, during her pregnancy, she discovered the syndrome of the little girl she was carrying in her womb, the gynecologist who was treating her advised her to have an abortion.

Hence, the letter. Aimed at all parents who find themselves faced with his own decision.

«I came to you - writes the woman in the letter published on the blog Parkermyles.com, addressed to parents with children with Down syndrome - in the most difficult period of my life. I was terrified, anxious, in total despair. I still didn't know the truth about my little girl, so I was trying to find out from you. Instead of help and encouragement, you advised me to have an abortion. I told you her name, and you asked me once again if we understood how much the quality of our life would go down with a daughter with Down syndrome. "


From then on, Courtney and her partner began to fear subsequent appointments with the doctor. «The most difficult period of my life - writes the woman - was made almost unlivable because you never told me the truth. My little girl was perfect. '

“Emersyn has not only added quality to our lives, it has touched the hearts of thousands of people. She has given us a purpose and a joy that is impossible to express. She has given us the biggest smiles, the sweetest laughs and kisses we've ever known. She opened our eyes to true beauty and pure love ».

"Your baby is perfect," Courtney concludes.

The photos of Madeline Stuart, model with down syndrome

Madeline Stuart is an 18-year-old Down model who will show in New York during the September fashion week. Madeline became a model thanks to the help ...

The story: I was told he was born with Down syndrome.

The story of my pregnancy and childbirth, despite having some features in common with many others, is a strange story. This is because, during an ultrasound, I discovered that my son had a heart defect and that he could have been born with Down syndrome. I immediately chose to fight for him. And I have never regretted this. I tell you everything better from the beginning. My husband and I, after ten wonderful and long years of engagement, we decided to get married on May 10, 2022. We immediately tried to have a baby. We wanted a family, we immediately wanted children. In fact, I got pregnant in July. I had hoped so much to become a mother in the immediate future and I realized that I was really, really lucky. I was in seventh heaven. I bought and took the pregnancy test on July 26, the day of the feast of St. Anne, protector of pregnant women and ... continue