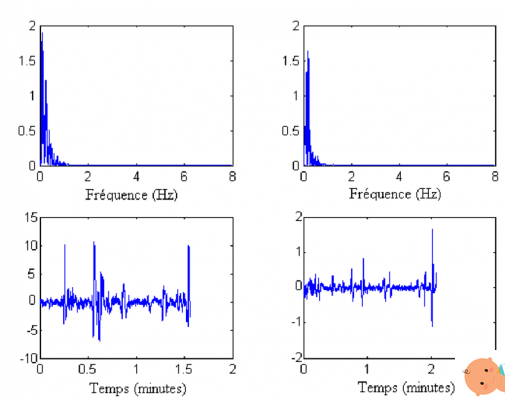 Active fetal movements are indicators of the well-being of the unborn child during gestation. The fetus begins to move very early, already in the very first weeks of pregnancy, and in this case its movements are easily identified with the ultrasound. For example, you can see:

As well as of course movements of the limbs, gradually more and more coordinated, and twists and turns of the whole body.

When and what mom hears

Starting around the twentieth week of pregnancy, but more generally between 16 and 24 weeks, they begin to be perceived directly by the mother. At first it is a slightly nuanced perception, like a flickering or bubbling sensation in the belly - a sensation that is sometimes confused with bowel movements (although mothers generally feel that this is an unusual movement).

As the weeks go by, the movements become perceptible as stronger blows, which could be soccer or punching, or you can see the formation of drafts on the belly, which correspond to the movement of a larger part of the body, as when the child is "pointing the butt". And of course there are the somersaults, which towards the end of the pregnancy, once found the final position (usually the cephalic one), the child no longer does, at least not in full.

Caution: it is not true that at the end of pregnancy the baby moves less because there is less space. It simply moves differently: with more strokes and fewer turns. The blows, which the mother began to feel strongly around 28-32 weeks, must always persist.

Read also: Breech position: the sweet strategies to try to make the baby run around

Why pay attention to fetal movements

A healthy fetus moves continuously, with a specific pattern for each child (someone moves more, others less, someone prefers certain types of movement, someone moves more in particular circumstances, for example when the mother has just eaten). For this reason, paying attention to fetal movements is a way for the mother to understand if she is going well.

It does not mean that you have to pay attention obsessively, but that it is advisable to talk to your doctor or ask for a check-up in the emergency room if, in the third trimester of pregnancy:

Anomalies in the perception of movements do not automatically mean that something is wrong: for example the child may have changed position and for this reason its movements may be less perceptible than usual. However, it is worth checking because a decrease or arrest of movement could indicate that there has been a reduction in the supply of nutrients through the placenta and this condition must be kept under control.

Read also: Fetal growth retardation: what it is, how to intervene, what are the prospects for the future

Sources for this article Fetal movement, article by StatPearls