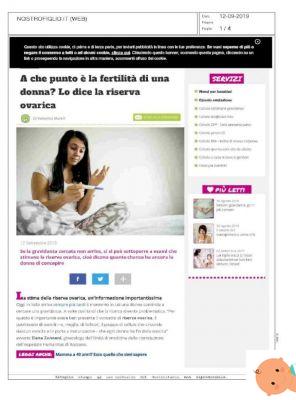 A very typical cough, similar to the cry of a seal (doctors call it "barking"), the sensation of choking, the lack of voice: are the characteristic symptoms of acute or hypoglottic laryngitis - also called croup - a condition that usually occurs at night, suddenly, frightening children and their parents a lot. Fortunately, it usually takes very little to resolve the situation, even if the first time it happens it is always a good idea to take the child to the emergency room or call the doctor.

23 Child Diseases Parents Should Know About

Although much has been done in terms of prevention and treatment, childhood diseases remain a fact of life. Some are common and harmless, others rare and dangerous. The site...

What is acute laryngitis?

It is an infection of the larynx - an anatomical structure that represents the last stretch of the upper airway - and the vocal cords. It occurs mainly in winter and is quite frequent (it affects 2-3% of children).


“In the vast majority of cases, the infection is viral and the main culprits are parainfluenza and flu viruses and the respiratory syncytial virus” explains Antonino Reale, head of the pediatric emergency department of the Bambin Gesù pediatric hospital in the city. "Only in a small part of the affected children, the infection is bacterial".

As a result of the infection, the tissues of the larynx and vocal cords swell (edema), with the result that, when breathing, it is more difficult for air to pass. "For anatomical reasons, the disease mainly affects younger children, between six months and three years of age," says the pediatrician. "Some get sick only once, while others may have multiple episodes over time."

How does acute laryngitis manifest itself?

The first characteristic symptom of hypoglottic or croup laryngitis is sudden difficulty in breathing, usually occurring at night. In other words, the child, who had gone to sleep peacefully, suddenly wakes up with a feeling of suffocation and difficulty in breathing that manifests itself with a particular noise at the moment of inspiration (pharyngeal screeching) and a characteristic "barking cough. ", very similar to the cry of a seal. Often the voice is missing (aphonia) and the baby has difficulty crying. In many cases, fever is present, but it is generally mild.


"It is a situation that very frightens both children, who obviously experience great discomfort, and parents, who fear that their children will stop breathing" says Reale. "However, it must be said that, in the case of croup, it is very rare that the respiratory difficulty becomes really dangerous and so severe as to require admission to intensive care".

What should be done in case of acute laryngitis?

Although acute laryngitis does not usually endanger the child, the first time it occurs it is a good idea to take the child to the emergency room or consult your doctor, also to be reassured and to learn how to behave, in case the phenomenon should recur.

Read also: FIRST AID, THE 16 CASES IN WHICH YOU NEED TO BRING THE BABY

Although it is not easy, the first thing to do is to remain calm and try to calm the child, because agitation tends to make symptoms worse and obviously the little one becomes even more agitated if he feels the concern of the parents. In addition, the child should be kept seated or erect, because lying down aggravates the feeling of suffocation.

The second step is medical therapy, with the aerosol or oral administration of cortisone. “This is what we do in the hospital and also what parents can safely do, if they understand what it is,” says Reale. “In the most severe cases, in the hospital we also use adrenaline, again as an aerosol. It works very well, but after a few hours there can be relapses. "

In the past, the so-called humectant therapy was often recommended: placing the baby near a source of moist and warm air, such as a humidifier, an open tap, the classic hot water pot. "In reality, scientific studies say that this practice is of no use" underlines the expert. "But it is true that too dry air makes inflammation worse and for sure humidifying the environment a little doesn't hurt. "

Are laryngitis and laryngospasm the same?

Although often used interchangeably, the terms laryngitis (particularly acute or hypoglottic laryngitis) and laryngospasm refer to different conditions. As we have seen, laryngitis is caused by an infection, which leads to inflammation and edema of the airways.

Laryngospasm, on the other hand, would be an abnormal contraction of the larynx muscles, probably caused by allergies. "From a clinical point of view, however, it is a less clear and characterized condition than laryngitis" explains Reale. "Many professionals today prefer to avoid this term."

What other conditions can cause breathing difficulties related to laryngeal problems?

When breathing difficulty occurs, with a characteristic noise during inspiration (pharyngeal stridor), the causes may be different. It will be the doctor, based on the symptoms, the way in which they arose, the age of the child and so on, to clarify what it is. Here are the main causes, summarized by the pediatrician Antonino Reale, head of the pediatric emergency department of the Bambin Gesù pediatric hospital in the city.

Sources for this article: consultancy from Antonino Reale, head of the pediatric emergency department of the Bambin Gesù di pediatric hospital in the city; Mayo Clinic web page http://www.mayoclinic.org/diseases-conditions/croup/basics/definition/con-20014673; Croup article on Doctor and Child http://www.medicoebambino.com/?id=OS0804_10.html

add a comment of Acute laryngitis (or barking cough) in children: symptoms, remedies