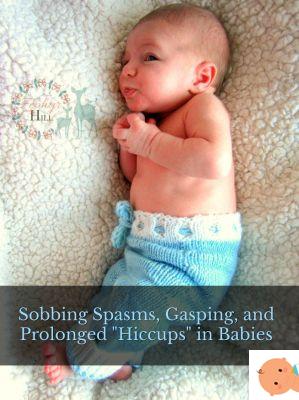 Affective spasms are manifestations characterized by the temporary loss of breath resulting from a situation of discomfort or anger. They affect about 5% of children (but the percentage is controversial) and can appear between 6-9 months and 4-5 years of life.

How do affective spasms manifest?

"After a more or less long phase of intense crying, in which the child appears very agitated, suddenly the baby stops breathing in the expiratory phase, becomes red or pale in the face, cyanosis appears in the mouth area (the lips become bluish ), there is stiffening of all the muscles or myoclonia, that is, small spasms or involuntary muscle contractions ”says Giovanna Tripodi, child neuropsychiatry.


“In some cases there may be a brief loss of consciousness or real seizures. After a few seconds, everything passes, the child takes a deep inhalation and resumes breathing normally, as if nothing had happened; at best he appears a little weaker ”.

Read also: Why do babies cry?

What are the causes of affective spasms?

"Affective spasms or apneas never happen suddenly, but always as a result of an event that causes tension or disappointment in the child" says Leo Venturelli, family pediatrician in the city and member of the board of the Paesena Society of Preventive and Social.


"In younger children they can constitute an automatic and unconscious reaction to a discomfort or pain, towards which they show greater sensitivity (in practice, there are children who, when faced with discomfort, react more calmly, limiting themselves to crying , others who hold their breath until they reach apnea); in older children, however, it is easier for it to be a reaction 'on command', of the series: if I do this, mum listens to me and makes me happy. "

Spermiogram: when to do it and what it is for ❯

add a comment of Affective spasms, what to do when the baby cries and holds his breath