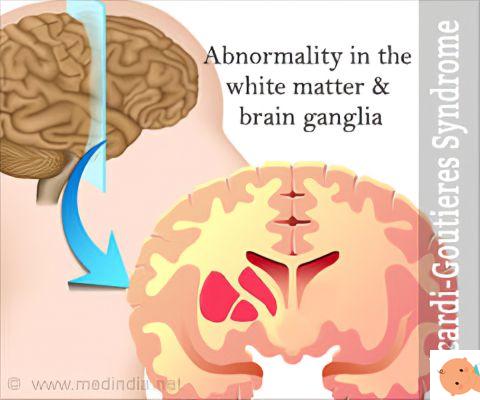 La Aicardi-Goutieres syndrome it is a rare but very serious condition that affects the central nervous system. The disease usually occurs within the first year of life.

Aicardi-Goutieres syndrome: what it is

Aicardi-Goutieres syndrome (AGS) is one genetic inflammatory disease which irreversibly weakens the central nervous system. This pathology belongs to the interferonopathies group, which involve theexcessive production of interferon, a protein that helps cells from viruses, resulting in damage to some neurological functions.

This syndrome is quite rare, but it does affect the life it suffers from cognitive and developmental delays, as well as physiological imbalances and sporadic - but cyclical - episodes of fevers, epileptic seizures and / or chilblains.

Aicardi-Goutieres syndrome is an inherited disease in which certain mutations at the genetic level alter seven genes different. This compromises the functioning of some proteins which therefore cannot properly dispose of the nucleic acids that our body produces. This situation causes an accumulation of acids that the immune system mistake for virus, thus activating a massive production of interferon to counter the threat. All this intoxicates the organism and triggers a further inflammatory reaction which further aggravates the picture. The consequence is severe and progressive damage to the central nervous system.

The disease occurs when both genes inherited from the parents are "defective". Parents are healthy carriers of an altered copy of the gene but with each pregnancy they risk a 25% chance of having a child with the syndrome.

The first effects of the disease can be revealed as early as first trimester of life of the newborn. The first red flags usually are chronic difficulty falling asleep, irritability and difficulties in nutrition. The appearance of moderate fevers it is often the triggering event.

The more visible features instead (such as microcephaly, dystonia - involuntary muscle contractions - and arrest of psychomotor development) become more evident later, after a period in which development seems to proceed normally. Sometimes the most noticeable effects wait over a year before finally manifesting themselves.

In general, albeit with some differences based on the individual clinical case, i symptoms and consequences of Aicardi-Goutieres syndrome can be:

Read also: I am proud of my son

Aicardi-Goutieres syndrome can be diagnosed through some specialist tests. Naturally, these tests are carried out in the presence of symptoms attributable to the pathology or an unusual increase in white blood cells in the cerebrospinal fluid which may give rise to some suspicion.

Diagnostic tests can be

At the moment they only exist experimental treatments to treat a syndrome which, at least for now, can only be treated with attention to the diet and daily support for the most disabling forms.

In a recent study cited by the Ospedale del Bambino Gesù, for example, some children with the classic form of the syndrome were treated with three antiretroviral drugs using the same doses intended for HIV-infected patients. This therapy resulted in a certain reduction of the inflammatory response, albeit in non-resolving ways.

TAG:
Alagille syndrome, everything you need to know ❯

add a comment of Aicardi-Goutieres syndrome: what it is and how it is treated