All his firsts, as mom and dad live them 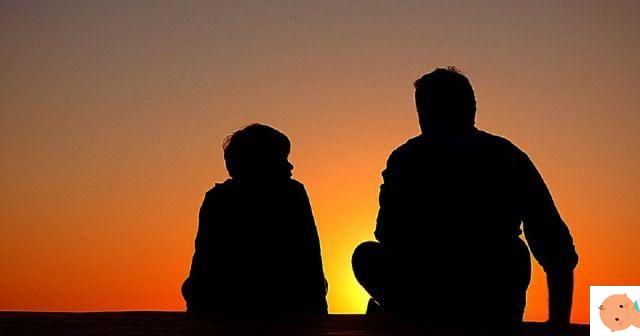 From the first smile to the first day of school, how many are the first times of a child! Many small and big steps towards achievement of autonomy and full self-construction. And how many emotions they arouse in parents! Let's go over the most important "first times", trying to "read" them with the help of the psychologist Daniela Bulgarelli, researcher in developmental and educational psychology at the University of Turin.

The first times of a child

The very first time, perhaps the most exciting, is the one in which the child, immediately after birth, opens his eyes on his mother's face and looks at her. From that moment on, the little one, who for nine months was nourished, protected and cradled in his mother's womb, begins his path of autonomy, fielding a series of skills and competences already marked in the first days of life. The parents, meanwhile, are enchanted to look at him, suspended between the magic of the moment and the expectation of the conquests that will come.

It usually comes around two months, when the baby smiles for the first time in response to an adult's smile (that's why it's called relational smile). But beware: as always when it comes to development phases, there is no X hour that has to be triggered: it can take days or weeks more.

Whether you choose a "traditional" weaning with baby food or self-weaning, around the sixth month - again, week plus, week less - the baby begins to taste something different from milk, maternal or artificial.


It is an important step, because it marks the first, important separation between the mother and her baby, who have experienced a very special relationship with breastfeeding. Now everything changes: what you eat and also how you eat it (sitting, with your hands or a spoon and no longer in your arms, sucking).

"It's true: many see this moment as a detachment, but we can also see it in a different and less traumatic way, as a moment in which the mother-child or, in general, parent-child relationship is re-established”Suggests Bulgarelli. "It is inevitable that as the child grows up, adults have to change the relational structure a little, to accompany him in his conquest of autonomy". It can be tiring, but it is also a source of great pride.

"On the other hand, if it is true that some parents may experience the closure of a phase of life as a little 'mourning', such as breastfeeding, it is also true that the fact that a little sadness is perceived means that that phase was beautiful, rewarding, enriching. We accept it and go on ”.

Another moment of great emotion: for the child, who can finally launch himself into the autonomous exploration (more or less ...) of that world that interests him so much, and for the parents. Generally, walking begins between 11 and 15 months but, again, there is no fixed rule: some babies can start moving on their own as early as nine months, others delay until a year and a half.

"The experience of the first steps helps to focus on a very important concept in the discourse on the first times of children, and that is that when they have to do with the development and maturation of the child they are never clear changes, which arrive at the 'sudden like lightning from the blue ”says Bulgarelli. “Instead, it's about moments that they are part of a journey that began some time ago. The first time a child stands up and walks is preceded by a more or less long period of other shifts in space: perhaps the child crawled, or moved on his butt. Then at a certain point he pulled himself up, leaning on some support - perhaps the hands of mum and dad - and began to take a few side steps, and finally took his first step alone, without support ".

"The first few times - specifies the psychologist - are actually the culmination of a whole previous construction, which has a lot to do with both the child's development times and his relationship with adults (parents, grandparents) or siblings if there are ".

Always around the year of age, the first words also appear, in addition to mom and dad, and it's funny to find out how much variety there can be in the words that are spoken first: the name of a little brother or sister, that of the dog or cat, a food of which the child is particularly greedy (or water) and much more.

“Even the first words are a clear example of how the great achievements of children come from afar” Bulgarelli emphasizes. “Before speaking, the baby will have emitted vocalizations and exercised with lallation".

And they are also a clear example of how important the relationship with the adult is in these first stages, given that the words come after a long period (even before birth) in which mum and dad have in turn spoken to the child, they read books, recited nursery rhymes and sang lullabies, and they welcomed his vocalizations with enthusiasm, repeating them to him.

Read also: Why reading is good for children

“It may seem to parents that the first months of a baby never pass and that everything is repeated the same as itself in the routine of breastfeeding (breastfeeding or artificial), changing diapers, and many nocturnal awakenings. Instead, what happens is that in this daily routine the fundamental relationships for the development of the child are being built ”concludes Bulgarelli.

The first time in the nursery or kindergarten

In this case, the age varies: the nursery can usually be entered from three months to three years, while the kindergarten or childhood school usually goes to three or four years. It is another important moment of detachment, if not from the mother - who may have already resumed work entrusting the baby to grandparents or a nanny - at least from the home environment.

"Unlike other firsts related to the maturation of the child, in this case there is really an X day in which things change radically" stresses the psychologist. “In the case of kindergarten, however, that doesn't mean that moment X can't be prepared. On the contrary: the adult should be aware of the fact that precisely because it is a special day, it must be prepared and accompanied, explaining to the child what will happen, how his day will unfold, who he will meet and preparing with him what is needed for kindergarten (backpack, slippers). This is very important to help the child get an idea of ​​the kindergarten ".

Obviously, a preparation of this type, in which to actively involve the child, is impossible for a baby of a few months who has to enter the nest. “In this case it is the adult who has to prepare well for this first time. By choosing a structure that makes him feel calm and convincing himself of the importance of this step. Not only because this way he can go back to work, but also because it is actually a great opportunity for growth and development for the child ”.

Read also: Children in kindergarten, how to manage the posting

The first times "in society"

"Some first times are not linked to the psychophysical maturation of the child - explains Bulgarelli - but to a very specific role of the adult, which is to to accompany him little by little to life in society. This is the case of the first time in a restaurant, at the cinema, in the library, or the first time to sleep alone with the grandparents: a first time, the latter, which through the step backwards of the parents helps the consolidation of a special relationship such as it is the one between grandparents and grandchildren ”.

The first time without a diaper

Another example in which the X hour does not - or should not - trigger. In general, the spannolinare occurs between the ages of two and three, when the child conquers by himself, by virtue of his physiological maturation, the control of sphincters.

“However, it may happen that some parents come to force the moment of farewell to the diaper, perhaps because it is the context that requires it, for example for inclusion in kindergarten. In these cases, however, the situation can become critical, because if the child is not ready, the spannolinare fails and this becomes a source of anxiety and stress for the parents, who start thinking only about that ".

“In these cases the best thing to do is to step back. Stop, relax and get out of a dynamic of stress that is not good for anyone, neither the child nor the parents. If necessary, ask for support from a pediatrician or a psychologist, for a simple path of accompaniment to parenthood. It applies to the diaper, but it also applies, for example, to the start of weaning or the end of breastfeeding, if they are offered at times when the baby is not ready. The fact is that steps like these are really important and should take place in a context that is as pleasant, positive as possible".

The first day of school

It is true: the entrance to the primary takes place on a very specific day, but it is not a day that appears out of nowhere. It is preceded by years of preparation for autonomy and in fact the child gets there when he is able to dress himself and take care of his own hygiene. Not only that: it is preceded by a certain preparation by the kindergarten (there is often continuity between the institutes, and the kindergarten children can visit what will be their primary school) and by the parents, who tell them about often - even at the request of the child himself - what the new school will be like, what he will learn, how it will be organized and so on.

"A narration that then accompanies, in retrospect, the memory of this as of all the other first times of the child, helping him to build a sense of his experiences" concludes Bulgarelli. "How many times in life will parents tell him, perhaps even with the help of photos and videos, when he started to walk, what his first words were, how they experienced being placed in the nursery or, precisely, the 'beginning of school ”.

add a comment of All his firsts, as mom and dad live them