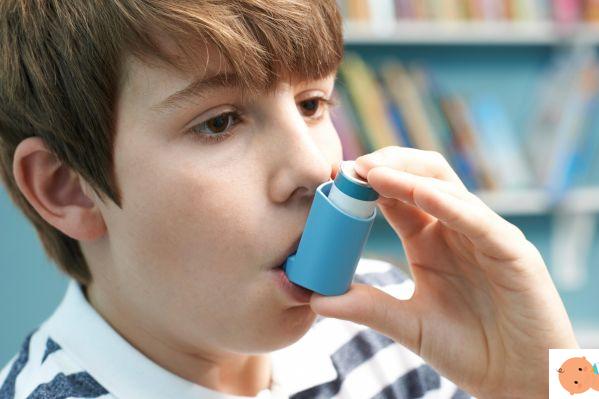 Children suffering from allergy - and their parents - have only one desire: to get rid of its annoying symptoms once and for all, be it a runny nose, conjunctivitis, hives or asthma, and the risks to which in some cases they may be exposed, in particular that of anaphylactic shock.

A strategy that can give good results in this sense is thespecific immunotherapy or desensitizing: the so-called allergy vaccine. We asked Marzia Duse, president of the Del Paesena Society of pediatric allergology and immunology and director of the pediatric immunology and allergology service of the Policlinico Umberto I of the city to help us shed light on this topic.

What is allergy specific immunotherapy?

"It is a therapeutic strategy that aims at 're-educate' the immune system of the allergic person, to make him tolerant to that particular substance that triggers the allergic symptoms, that is theallergenic"explains Duse.


The substances in question can be the most varied: pollen, mites, hair and dandruff of dogs and cats and so on.

Re-education takes place through progressive contact at increasing doses of the allergen itself, suitably treated and purified. In this way, the immune system gets used to interacting with the allergen and no longer reacting disproportionately, causing the onset of allergic symptoms: that is, it is desensitized.

"In practice, what happens is what the legend of King Mithridates tells us who, fearing poisoning, would have made himself immune to various poisons by ingesting a small amount every day, gradually increasing", says Duse, who is a pediatrician and immunologist.

For which allergies the "vaccine" is indicated

"Specific immunotherapy works very well against allergies caused by the venom of the hymenoptera, bees and wasps, and against respiratory allergies, such as rhinitis and asthma, while the forms in which there are fewer responses are the cutaneous ones ", says the specialist.


Even among the respiratory forms, however, there are situations in which it works better than others: "It happens when the subject is allergic to important structural components of the substance to which he is sensitive. If, on the other hand, the allergic reaction is triggered by secondary components, the therapeutic intervention may be less effective, "explains Duse. Pointing out that the current success of these vaccines also depends a lot on the fact that specialists have learned to select very well the patients to whom it actually makes sense to offer them.

How specific immunotherapy is done

In general it is about hiring gods drugs consisting of the purified allergen and which can be offered in two different formulations: as droplets or tablets to be dissolved under the tongue or as a subcutaneous injection.

"I prepared by mouth they are very convenient and can be taken at home, but generally they must be taken every day or almost (sometimes every other day, or in continuous cycles of a few days in a row and a couple of breaks) and therefore are valid especially for children in school age that we have a very attentive family, "says Duse." Conversely, i subcutaneous injectable vaccines they have the advantage of being able to be administered more rarely - on average once a month - but this administration must take place under the supervision of the allergist pediatrician, usually in hospital. It is the preferred way for teenagers, because it allows to keep under control theadherence to therapy, given that adolescents tend to follow the proposed treatments little and badly ".

Read also: From pediatrician to family doctor: 4 tips for a peaceful transition The success of the therapy is closely linked to following it in its entirety. "It is a long process, which lasts a few years, but often everything is abandoned at the first signs of improvement. And then the symptoms reappear"

A special case concerns food allergies. "There are no ready-made preparations yet (some experimentation in this sense is underway now), but desensitization is done with the introduction of small quantities ofallergenic food in increasing doses "explains Duse. In practice: you go to the hospital, where you are given a certain amount of" critical "food, for example egg or milk. If there are no side effects, every day at home the child will have to take the precise one. amount of food until the next appointment at the hospital, when an attempt will be made to increase the dose a little. "This strategy is now gaining official accreditation, but there is still no standardized reference: each center has its own recipe."

In any case, the therapy must always be established and followed by a pediatrician who is also experienced in allergy.

How long does the therapy last

Re-education of the immune system is a long, demanding process three to five years to complete. "The improvement in symptoms is not instantaneous but progressive: a little in the first year, a little more in the second and so on," explains Duse. Allergic crises gradually become milder and less frequent. However, if there is no improvement after the first year, treatment is usually stopped.

Once tolerance has been obtained, it is possible that this is not definitive: after a certain time the symptoms could recur, and for this reason periodic therapies are planned. maintenance. In the case of the poison allegies of the hymenopters, for example, every 5-6 years there is a cycle of desensitization to maintain the "memory".

The reaction to immunotherapy is very individual: in some cases there will be the total disappearance of the symptoms, in others a more or less marked attenuation. The success is very significant in the case of allergies to bee or wasp venom, where specific immunotherapy works like a real one. life-saving therapy.

Not only that: some studies show that by alleviating allergic symptoms in childhood, specific immunotherapy also helps to reduce the risk of experiencing more severe allergic forms in adulthood. "It happens with rhinitis allergy, which in the long run can lead to asthma, and with asthma itself which, by injuring the lungs attack after attack, can lead to severe asthma in adulthood. It has been seen that reducing attacks are reduced the risks of adult complications are also significant, "says Duse.

Not only that: the specialist's research group has found that allergic children treated with specific immunotherapy tend to have fewer infections compared to untreated allergic peers.

When can the allergy vaccine be done

In general, specific immunotherapy is proposed starting from school age, but in some particular cases it may be indicated even earlier.

"In the case of non-seasonal allergies, for example those against mold and mites, which are always present in the environment, immunotherapy can be started at any time" explains the immunologist. "For those seasonal to pollen, generally it starts long before the pollen season - in November-December - so that already the first year there can be a start of desensitization. Once the season is over, it is interrupted and resumed a few months before the beginning of the following season ".

Only in some regions is specific pediatric immunotherapy paid for in whole or in part by the National Health Service, while elsewhere it is borne by families. "The cost of the treatment is very variable, but to give an idea we could indicate a figure between 200 and 500 euros per year" conclude Duse.

Other sources for this article: Clinical Recommendations for Immunotherapy in Children, consensus paper of the Del Paesena Society of Pediatric Allergology and Immunology, published in 2022 in the Del Paesen Journal of Pediatrics

Read also: vaccines and children, guide from A to Z TAG:
Vaccines in pregnancy, what they are and when they should be done ❯

add a comment of Allergy vaccines: how specific immunotherapy works