Amber necklace: does it really work to relieve teething disorders? 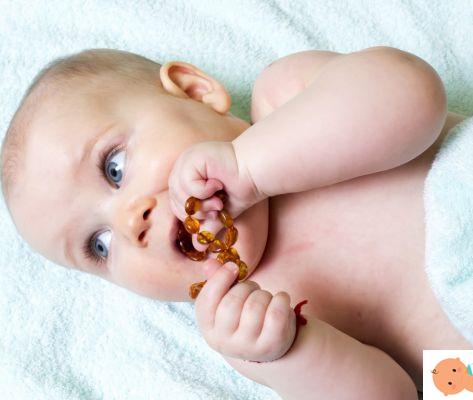 What is the Baltic amber necklace for?

Baltic amber necklace seems to be very much in vogue for relieving teething disorders, but not only. According to fans of this product, the necklace would bring numerous children beneficial effects including stimulation of the immune system and aid in digestion. All thanks to one substance - thesuccinic acid - which, released from this fossil resin when heated by contact with the baby's skin, would be absorbed by the body.

Succinic acid is actually present in Baltic amber, so much so that it is called the "spirit of amber", and is responsible for the characteristic aromatic smell that is obtained by burning the fossil resin. This compound turns out though irritating for the skin.

Fortunately, as a new study conducted by Australian researchers explains, the heat of the human body is not enough to release this substance: which also means that it is not even possible that it can bring positive effects.

The dangers associated with the amber necklace

If it is true that the amber necklace has no beneficial effect on the child, it is also true that many pediatricians report a concrete danger of suffocation: both because, while playing, the necklace can get entangled, suffocating the baby, and because it can break, releasing the small stones of which it is composed. And since necklaces are generally used to relieve the annoyance of teething, babies are obviously prone to putting them in their mouths, nibbling them and running the risk of swallowing them. Or, also, given the small size, to inhale them. Precisely for these reasons in many countries amber necklaces were not recommended: in the United States by the American Academy of Pediatrics and in Canada by the Federal Department of Public Health. In France and Switzerland it is no longer allowed to sell these items in pharmacies.

The sellers, for their part, on their websites argue that there is no danger of strangulation because the necklaces have a security lock with a point of failure, and if the necklace is subjected to traction it opens. And because - the traders always reiterate - the pebbles are blocked one by one on the wire, and therefore in the event of breakage there is no possibility that the elements will slip off: at most a single stone could fall.

Yet even a single stone could be enough to suffocate a child according to Isabelle Claudet, head of the Emergency Pediatrics Department at the Children's Hospital of Toulouse, France, who in 2022 published a study in which she analyzed why, Despite the risks, many parents continue to wear amber necklaces around their little ones. The conclusion was that, seeing the suffering of children during the period of teething, the abstract perception of danger is "obscured" by the concrete attempt to give it relief.

Furthermore, the results of a test conducted by Canadian researchers and published in the journal Pediatric Child Health, cast doubt on the claims of the traders: analyzing 15 amber necklaces purchased in Canada, the researchers found that more than half failed to open when subjected to the standard traction used for testing baby jewelry.

Finally, in 2022 the American Medicines Agency (FDA) released a press release warning parents about danger of necklaces after an 18-month-old baby was strangled to death during a nap due to the amber necklace used to relieve teething problems.


Read also: Children and the risk of suffocation: 4 tips to prevent

According to the American Academy of Pediatrics, instead of putting these necklaces around the neck of the children, it is better to give a light gum massage at the point where the tooth is emerging, or the use of the classics teething rings. However, it is better to avoid those that contain freezable liquid, since when they are removed from the freezer they are too hard for a baby's mouth: rather, you can put a small fabric or towel (clean!) With a knotted flap in the freezer, which then the baby it will nibble or suck and receive benefit.

In general, American pediatricians advise against the use of any necklace in children under the age of four, especially if they are not carefully supervised by an adult (as happens during the night or naps). And if you really want to use amber, it is better that they are bracelets or anklets, to be removed when the child is not under control.

add a comment of Amber necklace: does it really work to relieve teething disorders?