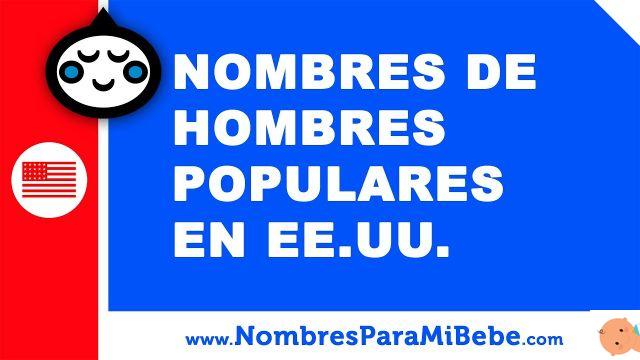 Are you a lover of the American Way of Life? Are you crazy for everything that comes from the Overseas and want your child to have an international name? Here is a list of beautiful ones American male names to be able to choose the one you like best.

Since the 50s, the US has influenced us with theirs mode, their films and their way of life. However, at least until the 80s it was not common to draw from the States also for the choice of "Made in Italy" children.

In recent decades, however, the tendency to choose American names has increased, also because globalization and the advent of new means of communication have made it much easier to exchanges between cultures different. Today it is not so rare to come across a Kevin or a Bryan ...

But what are the most popular American male names? The American Social Security Administration (SSA) tells us, which in 2022 compiled the Top Ten of the most common names in the USA:

Read also: The 20 most popular American names in the US

Short American names remain impressed in the memory and are always surrounded by a typically Yankee charm.

Unlike our "Adam" it is a very popular name that "stays in the head".

An Anglo-Saxon derivative of the term black (black), it is a very "rock" name, which exudes charisma.

Although it may seem strange, the origin of the name is Greek and means "winner" (from the Greek nike, victory, the same root as our Nicolò or "Nicola)

Stars and stripes version of Daniel, the originr is Hebrew-Aramaic ('dayan' = judge) and means "my judge is God"

Of Welsh origin, it can be translated as "son of the sea or the wave or the tide".

Nordic name deriving from the Norse language Eiríkr, which can be translated more or less as "he who always reigns".

Gary's origin is very dubious, but that hasn't stopped the name from becoming very common and popular

Same root as James, it means "God protected". There is also the name day, which falls on July 25 and April 11.

One of the American names par excellence, equivalent of our John (with relative name days).

English variant of Marco, but of sure effect thanks to the decisive sound of the pronunciation.

From Paul Newman onwards, a name that guarantees charm and charm galore.

The origin is Irish, derived (Ó Riain) and means "descendant of Rían". The name is very common among actors and characters of the star system.

Even if they are often accused of lack of elegance, Americans are a people who know very well what that means be cool (also because they are often the ones who dictate international trends). In fact, some American names are anything but stereotypical cowboy appellations, but they conceal a unexpected charmor reflecting on those who carry them.

Here are some examples:

Also in America we can find beautiful names that are good both if you are expecting a bimbo or one bimba:

American female names: the most beautiful

Of course, in the Land of Freedom there are also beautiful names for girls. Here, too, the list of the most common names drawn up in 2022 by the American Social Security Administration (SSA) applies:

But not only that, there are also less common names, but definitely fascinating.