Anxious or stressed mom? The baby's heart reveals it 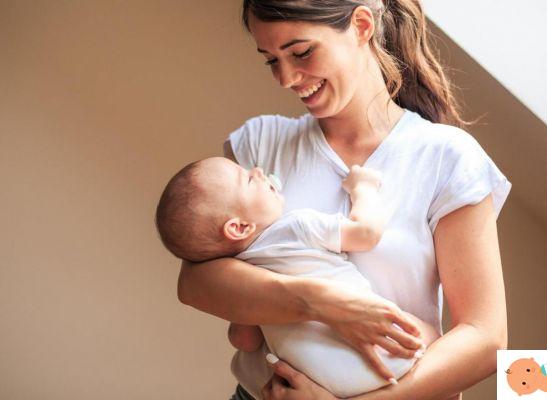 Anxious Mothers: Stress is passed on to their children

Children of depressed or anxious mothers show obvious physiological signs of stress, especially an increase in heart rate, which could lead to additional emotional distress as children grow up.
This was revealed by a study conducted in Germany by the European College of Neuropsychopharmacology. Researchers have shown that mothers with mood disorders, including the postpartum depression, transmit to children a sense of insecurity which then manifests itself in adulthood.

The interaction between mother and baby, especially in the first months of life, plays an important role in the healthy growth of the little ones. Some mothers, especially those suffering from mood disorders such as depression, anxiety o postpartum depression, transmit these states to the child, creating insecurities in children as they grow. Mood disorders (such as (irritability, mood swings, depression) are common during pregnancy and during the postpartum period and occur in 10-20% of women.

This is the so-called effect of "emotionally distant" mothers, an effect that has already been shown by several studies, in particular with the "Still Face Test" experiments, a test in which mothers alternate playful moments in front of their children with moments of absolute inexpression of emotional reactions.

Researchers from the German institute have shown that this effect is even more evident when dealing with children of mothers who are already anxious or depressed. In particular, the mother's lack of emotional attention led to a increased heart rate, on average eight beats per minute more than babies of healthy mothers. Furthermore, these children exhibited a more difficult temperament.

explains Fabio Blanco-Dormond, researcher at the University of Heidelberg:

"As far as we know, this is one of the first times this physical effect has been observed in 3-month-old babies. This can fuel other physiological stress systems that lead to etched psychological problems."

The study finds a fast heartbeat

Experiments were conducted with 50 mothers and their respective children. 20 mothers showed depressive states or anxiety disorders at the time of the tests while the other 30 were healthy. Each mother-child couple was subjected to the "Still Face" paradigm, in which mothers alternated moments of play towards the children with moments of emotional detachment, but maintaining eye contact. During the tests, the researchers measured the heart rates of both mothers and babies.

Researchers found that when mothers were anxious or depressed, the child had a more sensitive physiological response to stress during the moment of lack of attention on the part of the mother. However, the researchers themselves, as Blanco-Dormond explains, admit that this is a preliminary study and that larger samples will be needed to understand how the psychological state of the mother and her lack of attention towards the child can affect the heartbeat. heart rate of the child.

"This work means that it is important to diagnose and treat depressive and anxiety disorders in new mothers, because it has an immediate impact on the baby's stress system. Previous studies have shown not only short-term, but also long-term adverse effects. Postpartum mood disorders in babies. Most postpartum mood disorders begin during, or even before, pregnancy, and early diagnosis is therefore important. "

Altre fonti per questo articolo: Baby heartbeat reveals the stress of having a depressed or anxious mother

What should you do as soon as you realize you are suffering from postpartum depression?

What happens to the baby if the mother is depressed?

Babies of mothers suffering from depression may experience:

add a comment of Anxious or stressed mom? The baby's heart reveals it