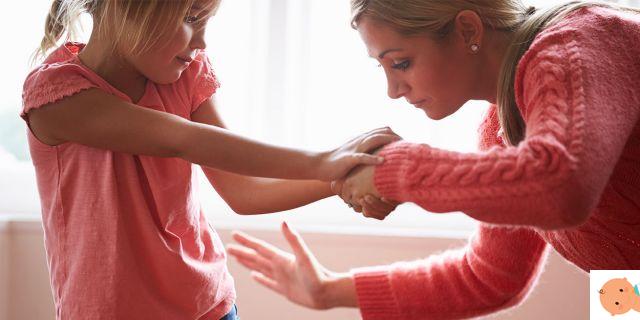 Despite several studies have shown the uselessness - if not the harmfulness - of slaps e spanking, physical violence continues to be used as an educational method. According to a relationship of Unicef in fact, over 300 million children between 2 and 4 years still regularly receive punishments involving components of physical or psychological violence and, globally, ben 1,1 billion parents or guardians they are convinced that the punishments corporal are indispensable for raising a healthy, polite and respectful child. Regardless of the extent of such "training" measures, however, these are all forms of violation of the children's rights.

«Adults responsible for the education of minors do not necessarily use violence with the deliberate intention of hurting or hurting the child - say the authors of the report - It is rather caused by anger or frustration, by ignorance of the damage that certain behaviors can cause or by being unfamiliar with alternative and non-violent methods " .

More and more studies are showing that spanking children not only does not solve behavioral problems, it can have long-term repercussions on their development. ...

Corporal punishment is a very transversal theme. In fact, unlike the vast majority of cases, this particular social characteristic does not depend on status or economic ease: children from wealthy families have the same probabilities to suffer violent punishments of peers belonging to less affluent contexts.

At the basis of such a picture is the ancestral belief that the blows, if distributed with "fairness and criterion", can straighten the wrong behavior of children.

Some countries - Sweden in the head - they have also tried to outlaw these violent methods (even those perpetrated by parents inside the home), but the situation has not changed much. Many are still convinced that violence is useful.

Of course, one 2005 research conducted by the American Robert Larzelere seemed to demonstrate a certain beneficial value of the "occasional" spanking, but according to the authors of the study, this violent outburst - as well as being truly sporadic - had to represent only a "reserve" to be unleashed only after the failure of all the other disciplinary alternatives.

Furthermore, the slap or the spanking succeeded in the educational intent only afterwards excuses on the part of the parent: in this way the child not only recognized that he had exaggerated to the point of making the adult lose control, but he understood that the use of violence was still a wrong behavior.

In short, an occasional slap in the face has never killed anyone, but the delusion that the violent gesture involves some pedagogical utility is absolutely wrong.

The baby may stop whining or throwing tantrums at the moment, but in the long run, the effects are far from positive.

"There is a psychological repercussion on the child - the developmental psychotherapist explains to Corriere della Sera Simona Dal Pozzo - development of anxiety, behavioral disorders, provocative oppositions, learning problems at school, more rarely a predisposition to the use of drugs in the future and violent behavior ».

For the expert, however, the worst consequence remains the habit of managing relationships physically and not through dialogue.

«Immediately, the beaten child often obeys the order he received for fear of being beaten. But for him it is also the first experience of cowardice ». explained Olivier Maurel, president of the French Observatory on Ordinary Educational Violence and interviewed by MyModernParents for the article "spanking, 10 reasons why it is better to do without it.

Also the meta-analysis made in 2022 by University of Austin and Michigan pointed out how spanking can cause aggression, mental health problems (and behavioral), low self-esteem and even one reduced cognitive ability.

And the prestigious American Academy of Pediatrics itself has taken a pretty clear stance against spanking. They block the child's action immediately out of fear, but they certainly don't help him learn the right behaviors to follow.

Spanking in the world: where it is prohibited by law

But if it is not true that "mazz and panell fann and figl bell" then what should parents do to decisively correct the incorrect behavior of their children? Bet on positive reinforcementpraising children whenever they behave well is one of the most recommended avenues. In this way the little ones are stimulated to behave well in order to seek approval and recognition.

To prevent the emergence of possible whims (eg: offering a healthy snack before the child gets hungry and craving for "crap") and offer clear and non-negotiable rules then it helps the children to reach the right balance.

Read also: Spanking, 10 reasons why it is better to do without it (according to science) TAG:
The seven golden rules of sporting activity ❯