Artificial milk for the newborn: which one to choose. Doses and quantities, preparation 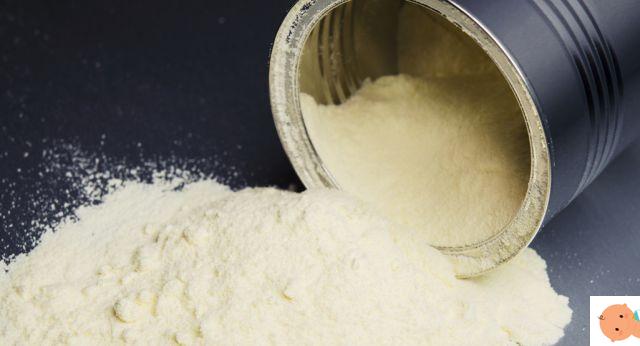 If for any reason breastfeeding does not take place - remember that breast milk is the natural food for the baby, therefore also the ideal one for its growth and psychophysical development - you must still offer your baby the best possible nutrition artificial milk properly and properly prepared.

Which formula to use

"I advise new parents never to give special milks at the beginning of feeding" says the neonatologist Giovanni Serra, former head of neonatal pathology at the Gaslini Hospital in Genoa. "In fact, their use must be introduced only after having identified the type of pathology, and this task is up to the pediatrician, who will indicate, case by case, which type of milk to use and the period of use".

The choice of infant formula

The artificial formulas they are not all the same: the Ministry of Health indicates composition limits, within which each manufacturer proposes its own recipe, perhaps adding substances that research gradually indicates as fundamental components of breast milk. Obviously with cost differences that can also be significant.

"To give an example - states Serra - in breast milk there is DHA, which is an essential Omega 3 polyunsaturated fatty acid, very useful for the maturation of the retina and for intellectual development. In cow's milk there is not and not all artificial milks put it in the formula ". Other enrichments may concern oligosaccharides, prebiotics or probiotics and nucleotides.

It can be difficult for a parent to find their way around choosing the best milk. This is why it may be appropriate to ask your pediatrician (or hospital neonatologist) for advice. However, Serra recommends formulas produced by firms they have research centersa in various parts of the world, that they collaborate with universities and hospitals, and which, in addition to normal milks also produce special ones.

However, it must be said that, at the moment, there is still no scientific evidence that a richer composition, which on paper might look better, is actually associated with positive effects on children's health. As the family pediatrician Alberto Ferrando points out in his book How to feed my son (LSWR Editions), "there is no scientific evidence that highlights the benefits or disadvantages of one milk over another".

Artificial milk every how many hours

How many feedings per day and in what doses?

A classic scheme provides, as a number of meals:

To understand how much a child should eat every day, divide the child's weight in grams by 10 and add 250 to the result.

With respect to quantities:

Can infant formula be given on request?

In recent years, the idea has been gaining ground that even in the case of infant formula - just as in breastfeeding - it is possible to feed the baby on demand. A guide to infant formula published by the Veneto Region on the basis of documents from the English Health Service, the Documentation Center on Perinatal and Reproductive Health of Emilia of the city and the then Birthplace of Vipiteno states for example that:

The baby can be fed on demand. He will thus understand the feeling of hunger and satiety and will learn to regulate his need for food. This is important for his subsequent relationship with food, reducing the risk of developing overweight and obesity.

Even Ferrando, in his book, writes that "the bottle, as well as the breast, is given on request, both for the time and for the quantity". And he continues:" We must respect the child's sense of hunger and the diversity from child to child. The little one, with rare exceptions, will eat as much as he needs and will stop when the necessary amount of food has been reached ".

On the other hand, the pediatrician specifies, the quantities of milk that are recommended on the packs based on age and weight are average doses, which for some children are exaggerated and for others insufficient. "Not all babies need the same amount of milk" concludes Ferrando.

If the child suffers from colic, regurgitation and reflux, the pediatrician may recommend a specific formula, lactose-free or otherwise more digestible.

Artificial milk usually makes the baby a little constipated. For this reason, frequent episodes of diarrhea must not be ignored and must be reported to the pediatrician.

I infant formula prices they can vary a lot based mainly on the marketing choices of the manufacturing companies. Enriched formulas may cost more, but this does not mean that they are healthier and safer than less advertised brands that produce a milk that - in its formula - perfectly complies with the guidelines established by the Ministry of Health. For this reason, the advice is not to immediately spend 30 euros for a package of "famous" milk, but to start with a less famous milk, cheaper but which perfectly meets the nutritional needs of the newborn.

The choice is personal and obviously also depends on the cost: powdered milk costs less, but needs to be reconstituted together with water, on the contrary, ready-made milk bricks only allow you to heat the milk, quickly and precisely. , and there is no risk of making a mistake in the composition because the formula is ready to use. The price is higher.

What are the hygiene rules to be observed when preparing milk?

There are two main types of formulated milks: le liquid formula, which are ready to use and sterile, but are the most expensive and in some ways less practical, and the powdered formulas, which however are not sterile.

Despite the accuracy with which these formulas are produced, the risk that they contain harmful bacteria for the baby's health cannot be 100% excluded. This is why it is essential to carefully and carefully prepare the milk to give to your baby.

How? The World Health Organization (WHO) has dealt with the problem, with a brochure dedicated to the preparation of baby bottles with powdered milk at home. The IBFAN (international Baby Food Action Network) recommends that you always follow these instructions, even if the producers give different indications on the label.

As water to be used for the preparation of infant formula, many pediatricians recommend using the low mineral content, bottled. According to the leaflet on artificial milk of the Veneto Region this is not necessarily necessary, you can also safely use tap water.

Artificial milk: which formula to choose based on the months of the baby?

In general, from birth to six months of life, the so-called formula 1 is used, the composition of which tries to be as similar as possible to that of human milk. After six months, the so-called follow-on milk, or formula 2 is switched to. In the case of babies with special needs, special formulas can be chosen - type 0 formula for premature babies, milk with a low content of highly hydrolyzed (i.e. chopped) proteins. for children at risk of allergies, special milks for digestive problems such as colic, constipation, diarrhea, gastroesophageal reflux.

The newborn drinks infant formula. How many feedings need to be given per day?

A classic scheme foresees, as the number of meals, up to the third month of the baby: six feedings a day every three and a half hours; around the fourth month: five feedings are passed every four hours; fifth-sixth month: four feedings.

Artificial milk, what should be the quantities of feedings in relation to the months of the newborn?

add a comment of Artificial milk for the newborn: which one to choose. Doses and quantities, preparation