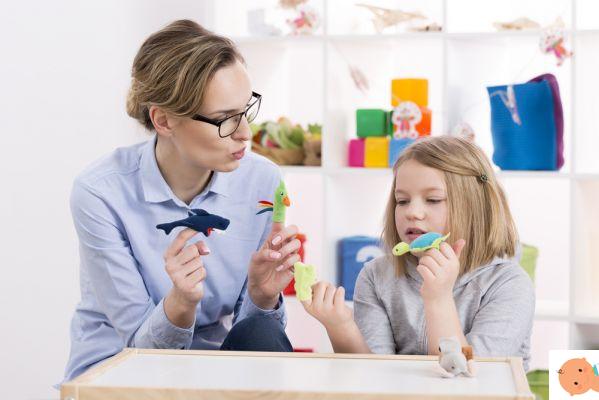 1. What is Asperger's Syndrome

"The Asperger's syndrome it owes its name to an Austrian pediatrician / psychiatrist and can be called one higher functioning autism condition" explains Leonardo Zoccante, child neuropsychiatrist of the integrated university hospital of Verona. "Those who are interested, in fact, have good (and sometimes excellent) intellectual abilities, reach a satisfactory level of autonomy and, in most cases, use language in a sufficiently appropriate way".

Although the term syndrome can be misleading it is not a disease, a disability or a handicap. "The most correct expression to use is condition of neurodiversity"the psychologist explained to mymodernparents.com Giovanni Magoni, co-founder of the CulturAutismo non-profit association. Specifying: "Neurotypical are the people who share the same way of organizing thought, while neurodiverse are the people who have a different way of thinking. Which certainly does not mean inferior".

2. The manifestations of Asperger's syndrome

As in general for i autism spectrum disorders, also Asperger's syndrome affects above all the areas of social relationship and communication: "The child is unable to understand the mechanisms of social functioning, and consequently to naturally manifest those behaviors that generally allow to enter into a harmonious relationship with the outside world "says Zoccali.

From the point of view of communication, however, there may be difficulties with respect to the integration between verbal and non-verbal sphere. "Some people can speak without gesticulating, without looking the interlocutor in the eye or showing a poor modulation of facial expressions", explains Magoni. It's still: language understanding is often literal (irony and metaphors can be very difficult to grasp) and it can be linguistic reciprocity is difficult, that is, the ability to conduct a conversation.

Other very characteristic aspects are certain rigidity of thought, also justified by the preference for predictable situations and environments, easier to interpret and manage, and a tendency to what are defined "restricted" interests. In practice, children with the syndrome can show truly heightened curiosity or interest only in a certain topic, to which they dedicate themselves exclusively: exactly what Greta Thunberg does with climate issues.

Often, although not always, these aspects are combined with what doctors define "motor clumsiness", which is expressed with difficulty in learning to walk, poor ability in movement games and in activities that require the use of hands, such as catching the ball.

3. It is more common in males

The frequency of the syndrome is not yet known with certainty, but it is known that it is more frequent in males. However, it must be said that the syndrome is most likely under-diagnosed in females, because in children there can be different manifestations (including eating disorders) and because many of them are able to "disguise" social difficulties, which perhaps only emerge in adolescence or adulthood, when social demands become more articulated.

4) When the diagnosis can be made

"The diagnosis can be made from 3-4 years of age: it is naturally up to child neuropsychiatry to formulate it after a careful evaluation of the case "says Zoccale, stressing that in some cases it can be diagnosed much later or even never.

However, it may be useful for parents to know which are the most commonly encountered signs, not to make the diagnosis themselves, but to be able to seek help from the specialist as soon as possible. Even in this case, in fact, early intervention can help to better control any inconvenience caused to the child by the syndrome.

5. The most common signs of Asperger's syndrome

6. The development of the Aspie child's intellect

Intellectual development is normal, although frequent focusing on a single activity or topic (for example, numbers) is unusual.. However, it must be said that this can also represent a strength for Asperger people, who often declare that they have been able to achieve certain results thanks to their "monothematic" interest and perseverance in pursuing their goals.

Sometimes the child with the syndrome can show great perplexity in the face of the behaviors that peers and people assume in response to his "bizarre" attitudes: to him who does not master the normal codes of communication, in fact, these reactions appear somewhat strange.

Asperger's syndrome can be associated with a clumsy way to move. More specifically - explains Zoccante - there may be difficulties in learning to ride a bicycle, to go up and down stairs, to use a slide or a swing, to stay balanced on the rocking horse.

However, these delays in the acquisition of motor skills are not essential to authorize the diagnosis, since not all children with the syndrome have them.

8. The causes are not yet certain. Hypothesis only

As for the causes, exactly like autism, nothing is sure yet.

The hypothesis is that it is influenced by the synergistic action of several genes which, once altered, predispose to the syndrome, while other environmental factors trigger it. According to clinical psychologist Tony Attwood, a researcher of the syndrome for many years, the advanced age of the mother or / and father could favor the disorder.

Since this is a condition of neurodiversity and not a disease, there are no "cures" in the classical sense that can resolve the syndrome, radically transforming the different way of thinking of Aspergers.

However, it is possible to intervene with cognitive-behavioral or educational interventions to limit any inconvenience caused to the child by its diversity. For example, they can teach social or peer relationship skills and improve communication aspects.

Of course, children and their families can experience the syndrome with feelings of frustration and failure: "In these cases, a good solution is represented by" parent-training "interventions, aimed at teaching parents which behaviors and which strategies can improve the relationship with the child and the relationship between the child and the outside world "says Zoccante.

You may also be interested in articles on: Autism, 10 Things to Know, Bes, Special Educational Needs

TAG:
Beckwith-Wiedemann syndrome: what it is and how to deal with it ❯

add a comment of Asperger's Syndrome in Children: 9 Things to Know