Aunts are EVERYTHING: science proves it 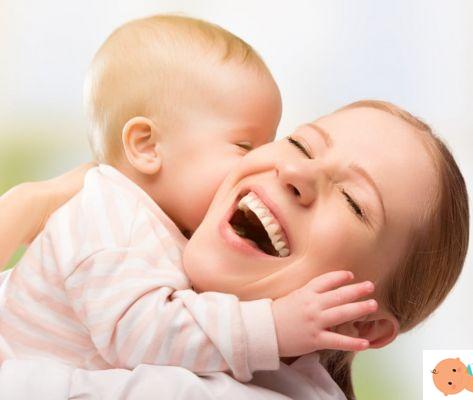 I became an aunt when I was little

I became aunt when I was 8 years old. I disinfected his little stump with alcohol umbilical cord (hey, it was the '90s), I changed my diapers, and admired all its miniature sweetness. I took an entire photo album when I took that 3 day trip to get to know my grandson, and I was only in third grade: it wasn't even to show it to my classmates.

I just wanted to let EVERYONE know: I was aunt!

Read also: The role of uncles and aunts in the education of nephews

Being an aunt is feeling unconditional love

Now, a couple of decades after that nephew was born, I've become an aunt 32 more times.

Being aunt is a fundamental part of my identity, this concept of unconditional love and care for these children who are not mine. And it has been like this since the day they were born, long before I became a mother.

One of the most interesting studies I've ever read describes one of the ways that all women, not just mothers, are instinctively connected to babies. 30 women were asked to smell a two-day-old baby; recently 15 women had had children of their own and the other 15 had never given birth. Brain scans showed nearly identical results in all of the women: the smell of a newborn unleashes the maternal instinct in them.

Children are literally a drug for women.

And aunts are no exception.

An aunt is a friend and confidant

Aunts choose to raise them and be with them even if there are no biological or legal requirements. They choose to love, invest and give without being parents. Sometimes an aunt is exactly what a child needs.

Aunts are friends, role models, confidants, adventure companions, advisers. Sometimes they make up for parental shortcomings. And this is great.

And now, as a mom who needs her breaks from time to time, I can better understand and genuinely appreciate the role a good aunt plays in a child's life.

I can safely deliver my son to my sister with the absolute guarantee of love, attention and care without limits. He won't handle everything the way I do, he's not a parent like me, but I know he is extremely happy to spend time with his grandson, giving him unconditional love and care.

Because she is an aunt.

Source of this article:

Read also: On vacation without mom and dad

What is a sentence that a nephew can dedicate to his aunt?

An aunt is a safe haven for every child. Someone who will keep your secrets and always remain by your side. (Sara Sheridan)

What is a sentence that an aunt can dedicate to a nephew?

The arms of your grandchild: there is no more precious jewels that you can put around your neck.

add a comment of Aunts are EVERYTHING: science proves it