Baby cot reducer: is it safe? 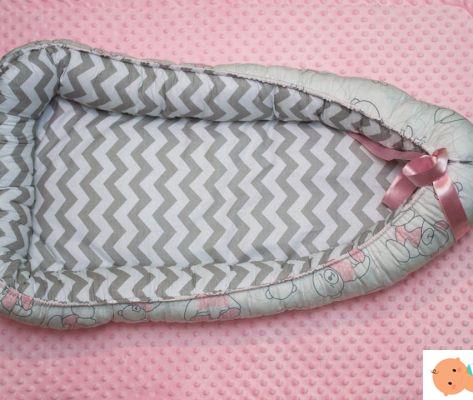 Very popular in recent years, the reducer for the cot it is a tool considered very convenient (and cheap) to make the baby's cradle more comfortable. However, some are convinced that not all products of this type guarantee adequate safety for the health of children.

Cot reducer: what is it?

Il reducer for the cot was born as a practical and economical accessory to make the baby's cradle more welcoming. It is in fact a kind of padded cushion which, in fact, reduces the space of the cot to make the baby sleep more peacefully.

The idea behind it would be that of recreate the environmental conditions of the uterus which for nine months has guarded the development of the baby, thus making him feel enveloped and protected in the first months of life "outside". In short, it is a further cuddle that should favor the baby's sleep and create a further barrier to risk of falls or bumps against the sides of the cot.

But is it really a safe object?

Read also: SIDS, the Crib Death Syndrome: what it is and causes

The first doubts about the effective safety of these reducers (bumpers in English) were advanced already in 2007, when the journal The Journal of Pediatrics published a study that highlighted several critical issues on these instruments that had now entered the market with great success. .

The research in fact showed that between 1985 and 2005 ben 27 infant deaths had been linked to the use of the reducers or because the faces of the children had been compressed against the pillow causing the suffocation, or because the bumper's laces had become unfortunate clinging to the neck of the children. Furthermore, the same study also raised serious doubts about the actual advantages that these accessories would bring in avoiding accidents or injuries during the rest of newborns.

In short, for the experts the reducers were not only useless, but they could also be dangerous and in 2022 the American Academy of Pediatrics (AAP) increased the dose by declaring the bumpers "unsafe" and not suitable for guaranteeing the safety of children. .

The new generation of gearboxes

But if the gearboxes are so inefficient and, indeed, dangerous, why are they still on the market? The answer lies in the corrections made to the products that are on the market today, so much so as to meet the approval of the various consumer associations. In 2022, for example, JPMA, an American trade organization representing the industry dedicated to children, declared how the bumpers went to meet the standard required for instruments of this type intended for early childhood, without however dwelling on the actual benefits brought about by their use.

Read also: Are the bumpers on the cot safe?

Which gearboxes to choose

There are therefore different types of gearboxes, however those considered the best and safest belong to the latest generation of products of this type, the so-called anti-suffocation reducers whose surface can be rigid or tightly meshed, like a net, so as to reduce the risk that the baby could choke by pressing against the face.

However, many scholars remain opposed to the use of such tools and recommend leaving the bed free - even from cushions and bumpers - to choose firm mattresses and use only fairly tight sheets to help the baby not to abandon the supine position.

TAG:
Returning home with the baby: that's what you really need ❯

add a comment of Baby cot reducer: is it safe?