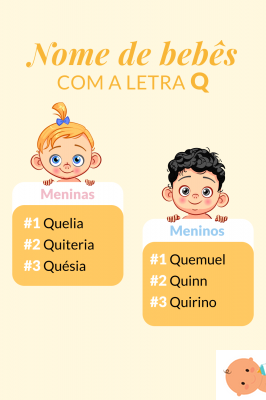 If you are looking for a very special name and are expecting a boy or a girl, we recommend that you read the names proposed in this article. Love originality and the letter Q? Here is a list of male and female names, with their meanings, which begin with the Q and will satisfy your searches.

Are you looking for good-sounding, meaningful male names starting with the letter Q? Here is a list for you.

Latin name that takes up the series of names that follow the order of birth. He was given to the fourth born in a family. The name day is celebrated on November 8, in memory of the Four Crowned Martyrs, who are actually five: Castorio, Claudio, Nicostrato, Simplicio and Sinfroniano.

The Latin names "Quintus, Quintius, Quintilianus" derive from the numeral adjective "quintus" ("fifth") and indicate the birth number of children within a family. Outside of Roman times, the name did not have much diffusion, except for a brief parenthesis during the Renaissance. On 19 March, San Quinto is celebrated.

Name created by the French writer Victor Hugo for the protagonist of the novel "Notre Damme de Paris" (1831). Quasimodo derives from the term "quasimodogeniti", used by Lutherans to indicate the first Sunday after Easter. The name day is to be celebrated on November XNUMXst, All Saints' Day.

Variant of the male name Ciriaco. It comes from the Greek "kyrios" and means "consecrated by the lord". It is possible to celebrate the name day of Quirico on June 16.

Name of Latin origin and deriving from the adjective "quintus" ("fifth"). It also means "born in July" (July for the townspeople was the fifth month of the year). With this name we remember the Roman orator and rhetoric master Marco Fabio Quintiliano, also called Quintilian only. The name day is celebrated on April 28th.

Latin name that derives from the numeral adjective "quintus" ("fifth") and which indicates, in a pet name, the birth number of children within a family. History recalls Quintino Sella, exponent of the first governments of the Kingdom of the country. On October 31st, Saint Quentin is celebrated.

Girl names that start with Q

If you are expecting a girl and are looking for a particular name for her that has the letter Q as its initial, consult this list.

Feminine name of uncertain etymology and of Latin origin, which takes the name of the ancient Sabine warrior deity of the city. The name day is celebrated on June 4th.

Of Latin origin, the name derives from the adjective "quintus". We remember the gens "Quintilia", of Roman nobles. The name day is celebrated on November XNUMXst.

The name Quintina is also of Latin origin and derives from the numeral adjective "quintus". It is always celebrated on November XNUMXst, All Saints' Day.

Female name variant of Ciriaco, of Greek origin. It means "consecrated by the Lord". The name day is celebrated on June 16.

Finally, here are some male and female names that start with the letter Q.

Male name of Arab origin, it means "charitable, which gives to the people".

French (but also English) male variant of the name Quintino, deriving from the Latin "fifth". This is the name of the famous director Quentin Tarantino.

Widespread female name in America. It is a variant of Anna, which means "divine grace, mercy".

Read also: 20 Foreign Baby Names You Should Know TAG:
Baby names, from A to Z ❯

add a comment of Baby names starting with q