Baby thermometer: which one to choose 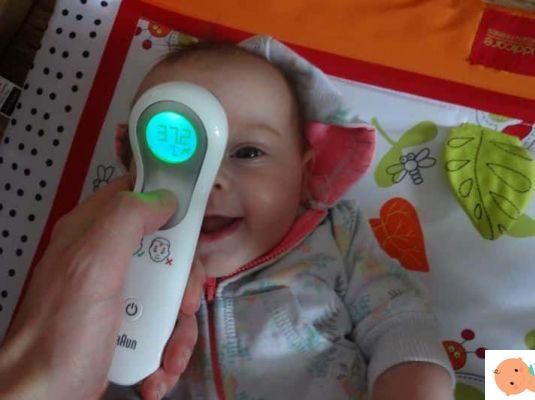 What is fever and how is it measured?

Hot? Do you have a fever? What's the best way to take baby's body temperature? "Let's clarify a couple of things first," he says Antonino Reale, head of emergency pediatrics atInfant Jesus Hospital of the city.

"In practice, you need to measure your fever when you need it, in a correct environment and with the best system. Having said that, however, no system for detecting body temperature is perfect, they all have critical issues, but for practicality and reliability I would recommend parents to use it. use of digital thermometer to be used under the armpits ", explains Reale.

Read also: Children's fever: symptoms, when to worry and what to do

The thermometer better in terms of ease of use is the infrared thermometer to be placed in contact with the skin or equipped with a pointer that allows it to be used at a distance.

They are really enough a few seconds to measure the temperature. But in inexperienced hands they are not always reliable.

Better to avoid ear infrared thermometers because they can be invasive for the baby.

Green light to use the digital thermometer for detecting fever at home because as well as being rapid it gives a margin of error that is not very significant from a strictly clinical point of view, that is, it is irrelevant for the diagnosis. In other words, it is possible that the digital thermometer signals a value of 38.2 degrees and the real temperature is instead, for example, of 38.4: the two tenths of a degree more, which could be important in, for example, scientific research on fever, have little relevance in the case of the individual child. In fact, it is not from this minimal difference that the subsequent way of managing the fever and the hypotheses that the pediatrician can formulate about its origin depend.

Read also: Baby thermometer: which one to choose

They are not recommended the "liquid crystal strips", which detect fever after being placed on the baby's forehead. These are aids that provide extremely inaccurate results, so much so that specialists believe that the mother's hand identifies the possible presence of fever with more accuracy than the strips.

I termometri a mercury have retired: have been withdrawn from the market on the basis of a European provision that decreed their toxicity. In some houses, however, there are still some. For the child it should not be used because the risk of rupture is high and their mercury content is toxic. They are not toxic instead galinstane thermometers which are also cheap and reliable: more accurate than digital ones, but take a little longer to take the temperature. They are very similar in appearance to common mercury thermometers, but contain an alloy of gallium, indium and tin called "Galinstan" inside the capillary.

How to measure fever

Il digital thermometer should be placed under the child's armpit. It is very easy to read, provides its result in 1-3 minutes and is equipped with an acoustic alarm that signals the detection.

It should not be used rectally: this modality is considered too invasive. Although it can be practical with very small children, because it is more complicated to keep the thermometer under the armpit for the time necessary. But there is a risk of injury and keep in mind that the temperature can be altered if there is irritation in the bottom or if he has just pooped.

Oral measurement should also be avoided (under the tongue) because it requires cooperation from the child which is almost impossible to obtain.

Il infrared thermometer "in contact" must be placed on the forehead, while the one at a distance must be pointed in the direction of the child, at the distance suggested by the accompanying sheet. In both cases, detection takes only a few seconds.

With the scientific advice of Professor Maurizio de Martino, pediatrician and full professor ofUniversity of the city and Antonino Reale, head of emergency pediatrics atInfant Jesus Hospital of the city.

Read also: Fever: how it is measured in children and infants

What is the easiest baby thermometer to use?

The best thermometer to use is the infrared thermometer, which can be put in contact with the skin or equipped with a pointer that allows it to be used from a distance.

Is it okay to use mercury thermometers for babies?

Mercury thermometers have been withdrawn from the market on the basis of a European regulation that decreed their toxicity, even if they are still found in some homes.

TAG:
Terrible two: how to recognize them, how long they last and how to manage them ❯

add a comment of Baby thermometer: which one to choose