Because it is important to greet the children before leaving 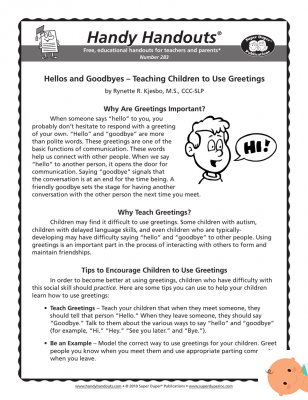 We are sorry to leave our son, even for a few hours. And even more sorry for the child, who is not happy with the idea of ​​separating from mom or dad. The most painless solution? At first glance it would seem to us to go away on the sly, taking advantage of a moment in which he is distracted by something else.

"But it's wrong," says the psychologist. “Because, after the moment of distraction, he will look for the parent again and, not finding him, he will feel betrayed and deceived. Or he could create negative fantasies: 'he who knows where he has gone, what is happening, he who knows if he comes back, I will have done something wrong'. Creating feelings of guilt that children are very good at attributing to themselves. It is true that the separation will be painful and we will not be able to avoid the little anguish of separation, but we must spare them the deception ”.

Read also: Education: 14 things parents should never do with their children

Greet them with a ritual

On the other hand, greeting before leaving creates continuity in the relationship, because the child understands that he can be trusted, that he can always rely on that figure. To make the separation more acceptable, it is important to greet him by following the same ritual every day, which has a strong soothing and reassuring power and creates a sort of 'thread' that unites the time interval between the detachment and the return. “At the moment of leaving, she is told in a calm tone that her mother must go now, but she will come back at that time to pick him up” explains Schiralli.


“These words are combined with a special greeting that only the two of them give, the delivery of a 'secret' object, a kiss or a particular hug to be repeated the same every day. Even if the child is very young and does not have the cognitive understanding of what the mother is saying, she instead has the emotional understanding, which reassures him ”.

Read also: How to manage the separation from children and allow them to grow up peacefully

And then go away

Once the ritual is complete, the parent should leave. “Extending the greeting indefinitely creates a push and pull that does not help, rather it transmits to the child an attitude of hesitation and also of insecurity on the part of the mother, who, in her eyes, lingers precisely because she does not feel calm. And at that point he too will insist that he not go away. After the cuddles and hugs, however, he says goodbye and goes away with serenity. In this way, the little one represents in his mind that his mother trusts that he can manage to be without her for a while. It is she who is leaving him in good hands ”.

TAG:
Why is it wrong to ask children to kiss someone ❯