Because theater is good for children 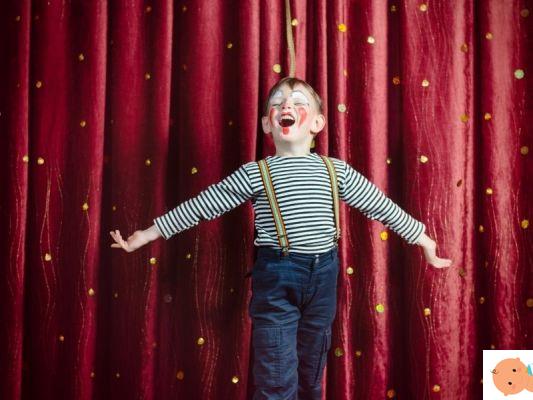 Get a theater course for children o accompany them to see the theater show it is very important for their growth, as well as fun. L'theatrical art in fact, it stimulates the imagination of the little ones, but also opens them to diversity, develops their empathy and a better perception of their body in space.

"When it comes to courses or theater performances for children, especially the younger ones, there is a clarification to be made: it is in fact an experimentation of pedagogical theater, with educational and socializing functions - explains Bassani, puppeteer and artistic director of the Teatro Laboratorio Mangiafuoco, one of the rare realities in Del Paese that works with very young children, nurseries and kindergartens -. Generally, they are ad hoc formats, where music or sounds and movement prevail ». Read also: How to make children love opera

The benefits of a theater course for children

It's never too early to start a drama class, but usually it really starts in first grade. THE benefits for children between 6 and 9 years who decide to undertake this path are many: they learn to work in a group and to train observation skills. In addition, it is an ideal laboratory in which to practice recognizing the emotions of others and also your own, developing empathy.

If the theater is practiced continuously, then, it is also useful for children to learn to control their physique in space.


When they grow up i advantages of a theater course for children they are all those described above, with the addition of an intensification of physical work, which contributes to their harmonious growth, and the development of self-esteem.

Also read: The benefits of a children's theater class (and what you can make them do at home)

The benefits of going to the theater for children

1. It stimulates the formation of personal taste

2. Improve the relationship with parents

«Generally it is the parents who take the children to the theater. It is therefore aopportunity to spend quality time together doing something unusual. Among other things, when we talk about theater for children, generally there are workshops or moments of active theatrical play in which young and old are involved. These are unusual and amusing moments that can then be repeated even at home ».


4. Opens to comparison and "different"

«Seeing the different“ worlds ”represented in the theater allows children to come into contact with reality, but also with sensations and emotions different from those they usually experience. It is once again an opportunity to enrich one's life experience and reflect on the diversities that are part of the world, trying to understand and welcome them ».

5. He reveals hidden parts of himself

«From the comparison with the different and, in the case of actions and theatrical games, from the experience with the different, surprising things arise. Both parents and educators are often very impressed by children who, in contact with the theater, express aspects previously unknown to them ».

Since when can children be taken to the theater?

«They can be taken to see a show since they are very young, even if in Del Paese it is not very common. We started working with children about 20 months ago 12 years ago, having been able to appreciate the works and experiences of foreign theater companies ».

It is a very interesting path, because even if they are so small, «We realized how attracted they are to the theater. You can also see it only from the posture and expressions: they are all leaning forward and their eyes wide with wonder ».


Read also: Children at the cinema: from what age to bring them?

What kind of shows

Obviously, it is good to take children, especially younger ones, to shows made especially for them. Generally, they are very representations brevi - they last 25-30 minutes maximum - and the sound part is the main one.

«For infants, in general, shows of image and movement are offered, in which music is very present, while words are few. In addition, these are more "intimate" moments than adult shows, in which a maximum of 30-40 children participate. These are works that go to the root of the expression: it is work that removes, not adds. In general, parents are also very impressed, because they are shows that thrill in their simplicity ».

In general, the advice for mothers and fathers of children of all ages is to show them more types of representations: «From shadow theater to actor's theater, from dance theater to musicals: the more experiences they will have, the richer their training baggage will be».

Where to take them?

«Going to the theater is certainly a unique emotion and experience, however it is important that the theater is also lived in everyday life: for this reason, for example, we have decided to work a lot with schools. Parents and educators can get information, because there are many associations that work within schools: sometimes it is enough just to launch the idea to be able to make your children live a theatrical experience in the classroom. It could also be a nice Christmas present for teachers »suggests the expert.

Recipes with children: egg and potato salad with mustard

Cakes for children, from 2 to 99 years

How to recycle panettone and pandoro: the tastiest recipes for children

Recipes to do with children

add a comment of Because theater is good for children