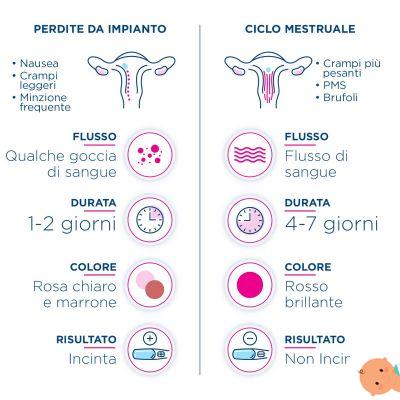 Blood loss in pregnancy: what does it mean?

Is it normal to have bleeding during pregnancy?

Among the most frequent inconveniences for pregnant women there are also the blood loss in pregnancy. During the first weeks of gestation, there may be losses due to the detachment of the trophoblast, a sort of placenta that guarantees nourishment to the embryo. Most of the time this problem does not compromise the growth of the fetus, but it is still good to ascertain its nature.

Other times, the losses may be due to so-called "false menstruation", ie slight losses approximately in the days when ovulation or the monthly cycle should have occurred.

In other cases, any red traces on the briefs instead they may be due to the presence of polyps, small fissures or hemorrhoids. In these cases, therefore, they do not indicate that something is wrong with the course of the pregnancy. If the ailments are mild and the gynecologist deems it appropriate, the woman can continue to live the usual life.

If, on the other hand, the blood losses are real hemorrhages, this may indicate a threat of miscarriage, and it is advisable to go to the emergency room.

It can happen, in the first trimester of pregnancy, to find on the panties slight dark red to brown specks: these can be caused by hormonal fluctuations, but also a sexual intercourse or the same gynecological examination, which could cause some capillaries to break. If you suffer from constipation, the origin could be a small fissure or a hemorrhoid.

Other times, however, it could be the so-called 'false menstruation': these are slight losses that occur approximately in the days in which the period should have arrived. In this case, these are usually very minor losses, lasting only a few hours or at most a day.

He blood loss is more abundant and bright red, especially if accompanied by pelvic pain, it could be one threat of abortion or an incomplete adhesion of the placenta to the uterine wall. In this case, it is best to contact your doctor or go to the emergency room. Unfortunately, it must be borne in mind that, if there has been an abortion, even a quick rush to the emergency room cannot change the outcome of the pregnancy.

In conclusion, bleeding is quite common in the first trimester of pregnancy, but they should not be neglected. In case they are not associated with pain, in most cases they do not necessarily have a negative meaning, however the fact remains that in the first trimester the frequency of abortion is about 15% and blood loss is a symptom , often late.

What are the causes of blood loss in pregnancy?

Un miscarriage occurs in the first 13 weeks of pregnancy. It occurs in about 10% of pregnancies. The first signs are:

However, about half of the women who suffered a miscarriage did not experience anticipatory losses.

A ectopic pregnancy (or ectopic) occurs when the embryo nestles outside the uterus: in most cases (over 90%) the nesting occurs in one of the tubes, but it can also occur in the abdominal cavity, in the neck of the uterus or ovaries. This phenomenon occurs in 0,8-2% of total pregnancies.

What if the losses are not at the beginning of a pregnancy?

Certain problems with the placenta may cause more frequently the vaginal bleeding in the last two trimesters of pregnancy. The causes can be:

Any kind of loss can be a sign of preterm birth. If you have a loss in an advanced pregnancy, consult your gynecologist or go to the hospital.

American Congress of Obstetrician and Gynecologist - Bleeding during pregnancy

How does an abortion threat manifest itself?

The threat of miscarriage is manifested by the appearance of vaginal bleeding or mixed discharge with blood, sometimes associated with abdominal cramps or pain in the lower abdomen or back.

How long can plant losses last?

It is not possible to define a precise duration, but in most cases they do not go beyond 48 hours but can last even a few hours.

TAG:
Leaks in pregnancy, which ones and when are they dangerous ❯