Breakfast: why to make it, how to make it and how to convince children that they don't want it 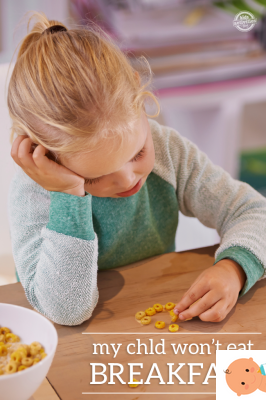 The importance of breakfast in children

For children, breakfast is very important: many studies now confirm that it reduces the risk of developing obesity and improves school performance, making them get higher grades.

We asked Giuseppe Morino, in charge of the food education service of the Bambino Gesù pediatric hospital in the city, to explain to us the reason for these effects, but also what characteristics a healthy breakfast must have, and how to encourage even the most reluctant children to eat.

No breakfast? Worst grades in school

The fact that having breakfast can also help at school is now confirmed by the results of various scientific studies. Like the one published last June in the journal Public Health Nutrition: by comparing the eating habits and school performance of about 3000 British 9/11 year olds, the researchers found that those who didn't eat breakfast got worse grades.


Even more recently, an article in Advances in Nutrition took stock of the studies available on the subject. Overall the conclusion is clear: having breakfast guarantees better cognitive performance in the hours following the meal, in terms of attention and memory. And a group of researchers from Exeter was able to see this effect "live": analyzing with magnetic resonance the brain activity of a group of adolescents called to perform cognitive tasks related to memory and attention functions, they realized that the brain those who had had breakfast were much more active than those who had not had it.

Why it happens all in all it is intuitive: "After the night fasting blood sugars are very low "explains Morino." Skipping breakfast only prolongs this situation, so the brain finds itself without its fuel main, which are the sugars. It is normal for attention and memory to be weakened ".

The effect on obesity

That's not all: skipping breakfast is also associated with an increased risk of being overweight and obese. The latest confirmation in this sense comes from a survey that appeared in the American journal Pediatrics in December 2022. After analyzing a sample of almost 20 children and adolescents, the authors concluded that among the main risk factors for a high weight is 'is right there bad habit of skipping breakfastand (as well as that of sleep little).


It may seem counterintuitive, because the feeling is that if you skip breakfast, you eat less overall, but that's not the case. Also, it triggers one hormonal and metabolic imbalance which promotes weight gain. "If you don't eat in the morning, your blood sugar drops even more and then spikes as soon as you swallow something, with the relative peak of the hormone insulin" explains the pediatrician. "In turn, the insulin, which has the task of maintaining the balance of blood sugars, causes them to collapse again, causing a sense of hunger". The result is that children who do not eat breakfast are at risk during the day eat no less, but more. And to get it wrong, with binge after hours: if you have not eaten for breakfast, in the middle of the morning you bite into sandwiches, snacks and snacks that make you go hungry for lunch. So at noon we stay light, to go back to filling up for a snack, and so on.

What and when to eat? Liquids and solids

Eating as soon as you wake up is therefore important. But how much and what? The ideal breakfast should guarantee the 15-20% of daily calories, which is about 270-360 for a 6-10 year old child.

Example: a slice of bread (30-40 grams) or 2/3 wholemeal rusks with jam without added sugar, honey or hazelnut spread.

Alternatively 3/4 biscuits, 25-30 grams of cereals or a slice of homemade cake prepared with oil instead of butter, wholemeal flour, dried fruit and a little sugar: "60 grams are enough for 250 of flour" advises the nutritionist.

To all this you can add a fresh fruit, perhaps in pieces in yogurt.

If the child prefers salty, every now and then yes to a slice of bread with a veil of extra virgin olive oil, a little fat-free ham or a piece of cheese. "Without exaggerating - specifies Morino - because the savory breakfast can be more caloric than the sweet one".

How to get children who don't want to eat to eat

What if the baby doesn't want to eat? "Often it happens because he went to bed late the night before and he can't wake up in time to have a calm breakfast," says Morino.

"It's normal: if as soon as you get up you have to run straight away to get ready and go out, while you are still half asleep, you certainly don't want to eat. In these cases you have to try to anticipate the time to go to sleepand".

A good example is also fundamental: "If mum and dad drink a cup of coffee on the go, clearly they don't make you want to eat. They too should have breakfast, sitting with their son around a set table."

Finally, in the early days you can give space to the preferences of the child, even if it is a brioche that is too high in calories or a piece of focaccia: the important thing is that you get used to it, then we will work on quality.


Breakfast cereals are often very popular with children. But pay attention to what you bring to the table. “They are often found on the market products rich in added sugar and salt, which can favor the development of obesity and cavities "explains Morino." Better to prefer i organic and whole grains and organic muesli enriched with dried fruit, both with no added sugar. In any case, proposing them in moderation ". TAG:
First ultrasound in pregnancy ❯

add a comment of Breakfast: why to make it, how to make it and how to convince children that they don't want it