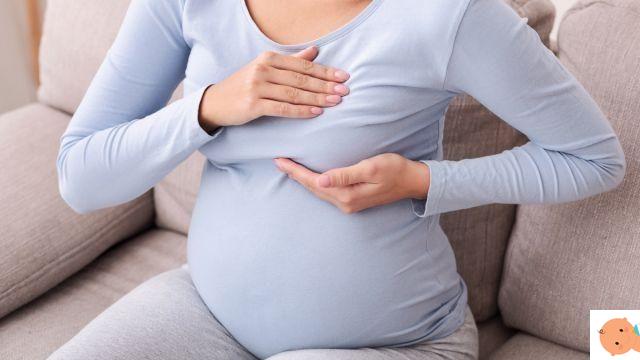 Il breast during the pregnancy undergoes a series of modifications due to the adaptation and preparation of the body in anticipation of birth of the child.


These changes are attributable to the changes in hormone levels which typically occur during this stage of a woman's life.

La Doctor Rossana , gynecologist in Genoa, explains how the breast during the pregnancy and gives us some tips on how to preserve her health and beauty.

"The breast it is formed by a daisy-shaped gland, with a tubular structure in the center, or small ducts that flow into the middle of the nipple, and 15 - 20 'petals' which are the lobules placed in a crown, immersed in adipose tissue "he explains Rossana , gynecologist in Genoa.

"During the first three months of pregnancy, the milk ducts and the lobules begin to increase in volume, under the influence of estrogen first of all, but also of progesterone, prolactin, ACTH (which stimulates the adrenal gland), growth hormone and other substances; cells such as lymphocytes and eosinophils also arrive in the interstitial tissue. The change becomes even more evident in the second quarter, when the lobules still grow and something similar to colostrum begins to form, while the milk ducts dilate and develop additional alveoli, which towards the end of pregnancy will begin and produce the real colostrum. In addition to this, the blood vessels normally present increase the blood supply over the months ".

The visible result of all these internal changes?

"Even before the menstrual failure, the breasts begin to enlarge, giving a sense of discomfort and tension and a greater sensitivity of the nipple, than often foretell the woman to be pregnant even before taking the test! "replies the gynecologist.

"Over the months, then, increases the pigmentation of the nipple and of the areola and small 'knots' form around them, while the veins on the breast become more evident, the skin becomes shinier and drier and sometimes reddish stretch marks appear.

If we try to feel the breasts, we may notice densest areas of glands, while if we squeeze the nipple a whitish liquid could come out. They are all normal phenomena, which signal that the breast is preparing to breastfeed the baby".

Un big breast has a larger fat mass but not a larger or more milk-producing gland, therefore even those with small breasts have the opportunity to breastfeed your baby at best!

Tips for preserving the health and beauty of the breasts

What are the first signs of pregnancy?

Nausea, pain in the lower abdomen, a feeling of tension in the breasts: these are some of the most common symptoms of a pregnancy.

How does the breast change in the first trimester of pregnancy?

The increase in hormones and the change in the structure of the breast mean that the nipples and breasts are sensitive and soft from the first three or four weeks of gestation.

Read also: How to firm your breasts after breastfeeding TAG:
Look Who's Talking ❯