Breast milk: does it really change if the baby is sick? 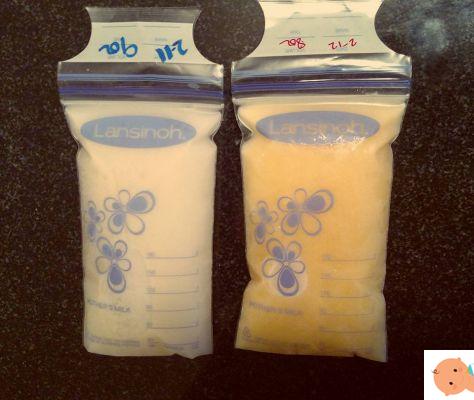 It is well known that breast milk changes over time, from hour to hour and over the weeks. Indeed, this is one of the main differences compared to infant formula, whose composition is always constant. But it is true that it can change quickly even in response to particular conditions of the baby? That a baby's cold is enough to make the mother produce a milk richer in cells and protective substances? That's what American mom Mallory Smothers thinks happened to her milk, which changed markedly - from white to yellowish - after her daughter had a cold.


It's actually hard to know how things actually went in the case of Mallory's milk, but the hypothesis is not without foundation: Several studies, in fact, suggest that the composition of milk - and in particular its concentration of white blood cells, cells of the immune system essential in the fight against infections - may change in response to a baby's disease. "But be careful: we still need to clarify whether these are truly universal events and what are the mechanisms involved" explains Riccardo Davanzo, neonatologist at the Burlo Garofalo Hospital in Trieste and breastfeeding expert.

On February 14th Mallory posted a photo on Facebook that quickly went viral. The photo shows two bags full of Mallory's milk, one filled on the evening of February 11, another the next morning. One glance, however, is enough to realize that the content is very different, with the milk expressed in the morning having a decidedly darker, yellowish color. "This milk immediately seemed much more similar to the colostrum that is produced in the days after birth and which is rich in antibodies and white blood cells, the cells of the immune system that help the body defend itself from infections," wrote the mother. She that she has formulated an accurate hypothesis about what may have happened to her milk her.


During the night, therefore, between the two collections, her child had begun to show the classic symptoms of a cold: the milk would therefore have changed precisely in response to this cooling, enriching itself with cells capable of lending a hand to the child in the fight against the disease. "It is certainly a fascinating interpretation - comments Davanzo - but on this case not much more can be said, because it would be necessary to have analyzes on the two milk samples. In any case, it certainly cannot be said automatically that a milk is more yellow because it contains more white blood cells: the color depends on many variables ".

Breastfeeding, 20 answers from the EXPERTS on feeding the mother

The mothers' doubts about nutrition during breastfeeding were answered by Angela, a nutrition biologist and Lidia Lewandowski, dietician of the NutrMyModernsParents team of Icans, center ...

The fascinating interpretation, however, is by no means devoid of scientific foundations. As early as 2022, for example, a small Israeli study observed an increase in white blood cells in the milk of mothers who were nursing very young babies, 0-3 months, hospitalized with ongoing infections. And again, in 2022 some Australian researchers recorded the increase in the concentration of white blood cells in the milk of mothers with infections, or who were breastfeeding babies with infections. In the latter case - that is, if it was the child who was ill - the increase was smaller, but still significant.

Of course, it is still too early to reach definitive conclusions on the ability of babies to direct the composition of milk, but perhaps even these preliminary data have to do with the increased protection from infections that appears to be conferred by breastfeeding. As the aforementioned Israeli study recalls, "much research conducted in both industrialized and developing countries shows that breastfed babies are less vulnerable to gastroenteritis, respiratory infections, ear infections, urinary infections and, as far as children are concerned premature, necrotizing enterocolitis ".

At this point, however, a question arises spontaneously: but How does the baby let the mother's "milk factory" know that he is sick and needs more white blood cells? One hypothesis is that during the sucking there are moments of "pause" in which the milk reenters the ducts bringing with it a little bit of the baby's saliva, and all the microbes it contains. Ready to be "analyzed" by the maternal organism.

add a comment of Breast milk: does it really change if the baby is sick?