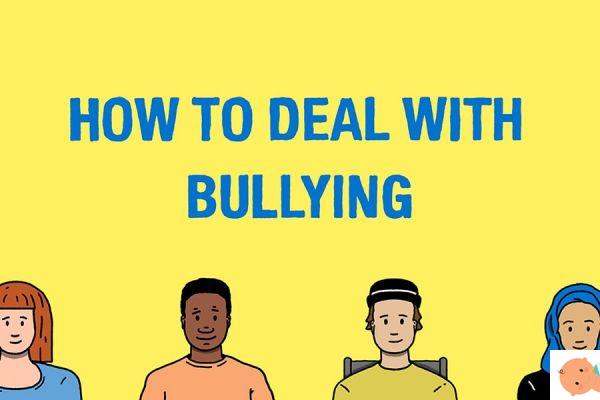 We often hear about Bullying which is, without doubt, one of the most alarming and studied phenomena of our society, but how it manifests itself Bullying and when goliardic jokes turn into real ones bullying which can cause irreparable consequences in those who suffer them? How to prevent bullying and by what means to combat it?

Read also: According to the Del Paeseni, bullying is on the rise: the fault of social networks

Bullying, what is it

Inside of us we know what bullying means and we are able to recognize it when we are faced with it. But if we want to define it clearly and unequivocally, we can borrow the words of Telefono Azzurro who for years has been committed to preventing, studying and combating the phenomenon of bullying:

Bullying means all those actions of systematic prevarication and abuse carried out by a child / adolescent, defined as a "bully" (or by a group), against another child / adolescent perceived as weaker, the victim.

This means, therefore, that we can talk about bullying in the presence of three elements:

How bullying manifests itself? We can spot three: types of behaviors that fully fall within the definition of bullying:

To these three categories we can also add the cyberbullying that manifests itself through the Internet or the mobile phone and which often makes it difficult to unmask the cyberbully.

But how to recognize a bullied child and what are the signals that should not be underestimated?

How to prevent bullying

Is it possible to prevent the bullying with education? Certainly a serene family atmosphere, in which to educate children to respect, empathy and compassion, as well as the importance of following rules and limits, it is fundamental, but also the school plays its part. So what can be done in synergy?

Read also: Against bullying: teaching children to fight and to group

Undoubtedly one of the areas in which bullying occurs most frequently is the school (but it can also affect him sport). And in light of the most recent data confirming that bullying has been prevalent since primary school, the Ministry of Education has released new ones guidelines for actions to prevent and combat bullying and cyberbullying.

Among the most significant and fruitful actions that can be implemented we point out:

The episodes of bullying in Del Paese

According to a sample survey carried out by EURES, over 9 out of 10 young people involved in bullying and mainly at school. The research was carried out among 1.022 upper secondary school students of the city: in the last year 66,9% of young people were bullied at least once (67,8% girls and 62,6% boys) , 81,3% have witnessed one or more of these episodes, while 37,8% indicate that they have committed it on one or more occasions (44,8% of males against 31,3%).
In practice, only 9,3% of young people state that they have not been involved in any way in episodes of bullying, or that they have not been a victim, perpetrator or witness. And the environment in which the greatest number of episodes occurs is precisely the school: 57,3% of the victims claim to have suffered such acts within the classroom and 34,9% within the school (in environments other than the classroom).

How to help a bullied victim

There are many warning signs which may indicate that someone is being bullied and when suspicion occurs it is best to intervene immediately by talking to the child, his friends and teachers. Recognizing the warning signs is important because not all children who are bullied ask for help.

Why do you become bullies

What are the delivery times? factors that can increase the risk of a child becoming a bully?

Read also: My child is a bully: what to do?

What to do if your child is a bully

First of all we are careful, we always observe our children and we communicate with them. Parents often discover that their child is a bully only when they are summoned to school, or when the evidence cannot be denied, and until the very end they refuse to believe that their quiet and beloved child has become a bully.

What are the delivery times? signals not to be underestimated in small bullies?

In Coosemans, family coach and author of the book 'What Kids Don't Say', interviewed in this article, explains that certain behaviors must be implemented such as:

Every year the 7 February, on the occasion of Safer Internet Day, the National Day against Bullying and Cyberbullying: an important opportunity to photograph the data relating to the spread of the phenomenon in our country, but also to tell stories, propose solutions and study new methods of intervention.

The advent and growing use of digital devices by the very young has certainly contributed to the evolution of the phenomenon of bullying into one of its "digital version" more subtle and dangerous. Let's talk about the cyberbullying, which consists in committing verbal and psychological violence against the victim using smartphone e tablets and conveying the bullying on chat and on social networks.

The use of a computer or cell phone has a disinhibitory effect: things are said to each other that would never be said in the face. Because of this it became easier to attack. So even the repressed, who would never have been bullies, bring out their aggression and become cyberbullies.

What to do if you are being bullied?

Talking about it at home is the first fundamental step to make our loved ones aware of the situation and take all necessary precautions. The second step is to discuss it with the teachers and the principal.

Is bullying a crime?

Bullying is a criminal offense and bullies are punishable by heavy penalties. For this reason, when you are aware of or are victims of bullying, you can contact the public force, the Carabinieri and the State Police.

CONSULT THE NUMBER TO FIGHT BULLYING IN YOUR COUNTRY

TAG:
Bullying and Cyberbullying: phrases and quotes to combat the phenomenon ❯

add a comment of Bullying, what it is and how to deal with it