Can mortadella during pregnancy be eaten? 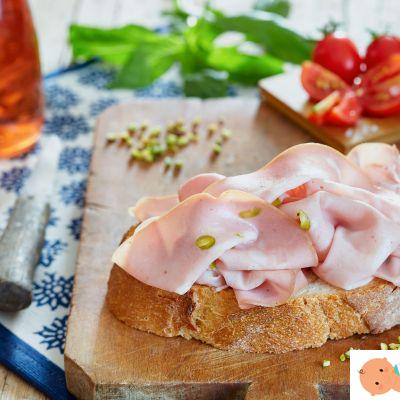 You are pregnant and you want mortadella?

Quiet the mortadella it is a salami cooked and then sure if consumed during pregnancy. Find out what other cured meats you can eat (if you are not immune to toxoplasmosis) and why.

What are the safe cured meats in pregnancy

In pregnancy, mortadella and cooked ham are safe

During pregnancy you can eat:

Mortadella and cooked ham have high temperature processing processes, which are able to defeat bacteria and protozoa, including toxoplasma, which is inactivated above 60 degrees. "Even if you have never contracted toxoplasmosis and the toxo-test is therefore negative, mortadella and cooked ham can be consumed" says Giulia Casu, gynecologist at the Clinic in our city and consultant of ASM, the Association for the Study of malformations.

La mortadella it is a "cooked" cured meat based on pork and fat (lard). Depending on the type, it has variants of beef, liver and different spices.

Cold cuts to avoid during pregnancy

Better to avoid, if you are not immune to toxoplasmosis:

Raw ham, salami, bresaola, pancetta, capocotto and other raw cured meats have processing processes that do not involve the use of high temperatures, so if you are not immune to toxoplasmosis they should be avoided or they must be cooked.

Some say that the protozoo it could be inactivated by aging, smoking, freezing processes. "In the scientific literature there are conflicting studies on these topics, so as a precaution it is better to avoid the consumption of raw cured meats altogether," says the gynecologist.

Is there any level of seasoning that allows you to consume raw ham with peace of mind?
Some observations suggest that curing longer than 24 months reduces the risk of toxoplasma infection, but does not completely eliminate it, and in any case it is difficult for consumers to be sure of the duration of a curing. For these reasons, if you are not immune to toxoplasmosis it is worth making the sacrifice of temporarily giving up raw ham. The same goes for coppa, pancetta, speck, bresaola, culatello and raw salami.

What is toxoplasmosis and what are the risks?
La toxoplasmosis is an infection caused by a microorganism called Toxoplasma gondii. In the vast majority of cases you don't even notice you have had it, because it gives mild and general symptoms, such as tiredness, headache or throat, feeling of "broken bones". Once contracted, it leaves a lifelong immunity.
If taken during pregnancy it can be very dangerous for the baby, as it can pass to the fetus through the placenta. Read more about nutrition in pregnancy 10 PHOTOS

10 tips on diet during pregnancy

Do not eat for two, combine carbohydrates and proteins with every meal, increase your consumption of proteins, prefer whole grains, indulge the 'cravings', every now and then a day of abstinence from ...

Read also: Birthmarks in pregnancy: what they depend on, how to behave TAG:
Infant mortality: 50% more in the South in the first year ❯

add a comment of Can mortadella during pregnancy be eaten?