Canned tuna when pregnant: can it be eaten? 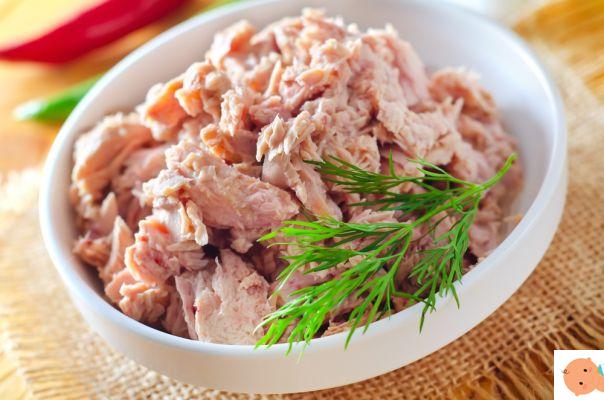 Large-sized fish: during pregnancy it is better to eat them in moderation.

As a general matter, large fish, such as the tuna and swordfish, they tend to accumulate greater quantities of mercury in their tissues than other medium or small fish and it is therefore advisable to keep their intake under control to avoid taking large quantities of mercury which can be potentially toxic for the fetus.

Consumption of tuna and swordfish however, it is not prohibited, but once again it goes limited, giving preference to other types of fish.

Can I eat canned tuna when pregnant?

Il canned tuna you can consume it safely, but more sparingly, both for

The recommendation is therefore not to eat canned tuna more than once a week.

And the tuna in all its other variations with recipes? We are talking about tuna and beans, pasta with tuna. But also tuna pizza, pate with tuna: when the tuna is cooked the same precautions always apply. Don't overdo the weekly amount.

But no to smoked tuna: the same rule applies to smoked or marinated salmon. Since it is not cooked, but raw, it is best avoided in pregnancy.

Which fish to eat when pregnant?

I'm pregnant all types of fish are indicated (in portions of 100-150 grams): from the leaner and easily digestible ones such as:

to the fatter ones such as:

add a comment of Canned tuna when pregnant: can it be eaten?