Car seats for babies: the most common and most dangerous mistakes 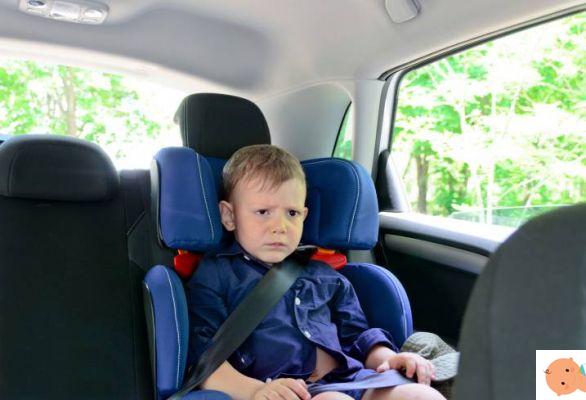 Babies: the importance of safety in the car, right from the first trip

From his first car ride, the one that usually takes him from the hospital to his home, the infant must travel safely: correctly positioned inside a special "restraint system" - usually an infant carrier or carrycot - which must be installed according to the manufacturer's instructions. The law provides for it and there are no exceptions.

The problem, however, is that parents often fail to install the system properly, or to fit the child as it should. This, at least, is what the results of an American survey published in the Journal of Pediatrics denounce, according to which even fewer than one in 10 babies travel safely.

Researchers at Oregon Health & Science University evaluated the installation and placement of restraint systems mounted on 291 cars preparing to welcome a newborn on its first trip home from the hospital. Well, 95% of the families made at least one mistake in using the carrycot or the car seat, and 91% of the cases were serious errors.

Is it better to carry a baby carrier or a carrycot?

The advice of Luigi Di Matteo, engineer of the ACI Technical Area.

Children must travel in devices suitable for their age and size: for newborns, the appropriate device is the egg. "If you need to buy a new one, I recommend a product that follows the new one standard I-Size, which provides for the choice of the device no longer based on the weight of the child, but based on his height "explains Di Matteo." These products, in fact, guarantee a better impact resistance for head and neck"In any case, the legislation does not replace the previous one, so those who already have an egg can still continue to use it, following the specific indications.

With regard to spacecraft, if on the one hand they may seem more comfortable, because the child travels lying down and there is no risk that the head will dangle forward (provided of course to position it belly up), on the other hand the ACI does not recommend them. "The risk of overturning in the event of a collision cannot be ruled out," explains the engineer.

The most common mistakes in the car

Let's look at the most common and dangerous mistakes that can be made regarding the installation and use of infant restraint systems, according to the American study cited.

1. Incorrect use of lashing belts

For car seats that are fixed with belts, the most common mistake is the incorrect use of the belts for anchoring, whereby the seat moves back and forth or from side to side with a "play" that exceeds 2,5, XNUMX cm.

Use the seat belts according to the manufacturer's instructions, so that the seat is locked well and does not "dance".

2. Failure to lock the seat belts

Where possible, always manually lock the seat belt that holds the seat in order to ensure its stability.

3. Attachment too "soft" for child seats that are fixed with Isofix attachment

Check the tightness of the anchor, to be carried out according to the manufacturer's instructions.

In the event of an impact, a seat that is tilted too far forward can result airway obstruction.

Pay attention to this detail, choosing the angle indicated by the manufacturer.

5. Child seat positioned on the rear seat, but too close to the front seat

As ACI engineer Luigi di Matteo reminded mymodernparents.com, the best position for the egg is that in the back seat, behind the driver, but the central location is fine too. The direction must be that opposite to the direction of travel, because in the event of a collision this allows to limit the forward movement of the head. American pediatricians recommend checking that the rear seat is not in contact with the front seat.

If you really want to put the baby in front, always in the seat mounted in the rear facing direction, you must remember deactivate the airbag. Otherwise, in the event of a collision the little one will be crushed by the airbag itself.

6. Shoulder straps too loose, loosely attached or with the latch too low

The straps must restrain the child and not be too soft, the hook must be closed well and must be positioned at chest level.

7. Use of elements extraneous to the restraint system and not approved

It is a rather common mistake: using elements, for example cushions, not foreseen by the manufacturer and therefore not regulated.

Always use approved products, the use of which is actually contemplated by the manufacturer.

In case of doubt

For clarifications or information on how to correctly install a child restraint system you can contact to the nearest ACI office on the territory. Periodically, the ACI also organizes awareness campaigns on the subject of road safety for children as part of the Safe Transport Project. You can also take a look at the ACI's online help on child restraint systems.

The importance of information!

In their study, the American researchers also verified which families they had received precise instructions from a technician specializing in these restraint systems made fewer mistakes in installing and positioning the child. Hence, the invitation to encourage information activities on these aspects, perhaps within the birth points.

Read also: Babies and premature babies in the car: tips for a safe journey

We remind you that from 7 November 2022 the implementing regulation of article 172 of the New Highway Code entered into force, which made the anti-abandonment device for the child seat is mandatory by car for all children under the age of four. Sanctions are envisaged from 6 March 2022 for those traveling without the anti-abandonment device for their child's car seat or with a non-standard device.

The device can be integrated directly into the seat by the manufacturer, or it can be independent of the child restraint system. In all products, however, the alarm must be activated when the driver leaves the vehicle.

As the magazine Altroconsumo has very specific, sanctions can be triggered in different cases:

TAG:
Signs that the baby is about to be born ❯

add a comment of Car seats for babies: the most common and most dangerous mistakes