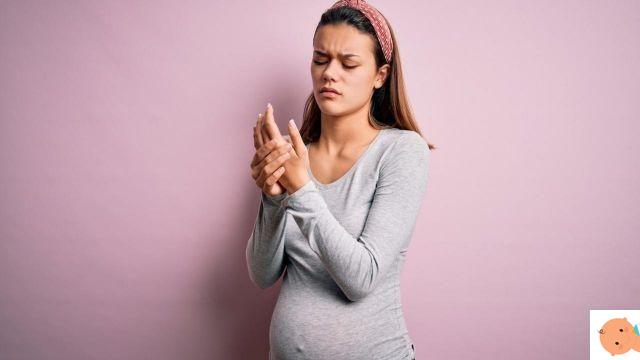 What is the carpal tunnel

Il carpal tunnel o Carpal tunnel syndrome (CTS) is a disorder characterized by tingling and numbness in the hands, sometimes radiating to the arms. The discomfort is often bilateral and is felt above all in the morning, after prolonged nocturnal immobilization, but sometimes it persists even during the day, hindering even trivial actions, such as grabbing objects, writing, cooking.

Causes of Carpal Tunnel in Pregnancy

To cause carpal tunnel in pregnancy "are mainly the changes in hormone levels of the nine months, which cause a thickening of the connective sheaths that surround the wrist tendons, consequently compressing the nerve fibers that bring nerve sensations to the hands" explains Stefano Bianchi, head of obstetrics and gynecology at the San Giuseppe Hospital in our city, as well as associate professor at the State University.

If you often use the PC keyboard, it is a syndrome you probably already know. However, pregnant mothers who have never touched a computer can also suffer from it.

Remedies or how to relieve the discomfort

"The only really effective, even if temporary, remedy is shake your hands a little, because the movement relieves the compression and stretches the nerve fibers "replies Prof Bianchi.

"For the rest there are no ointments or pain relievers that really help. Keep in mind though that the carpal tunnel is intended for resolve on its own within a few weeks of giving birth, when the normal hormonal structure is restored. Only in rare cases, if the disorder persists and is particularly severe, a minor surgery may be necessary to widen the opening of the tunnel along which the nerve fibers run. "

Hepatitis A in pregnancy

Vegan diet in pregnancy: how to avoid the risk of harm to the baby