Catarrhal otitis in children, what it is and how to cure it 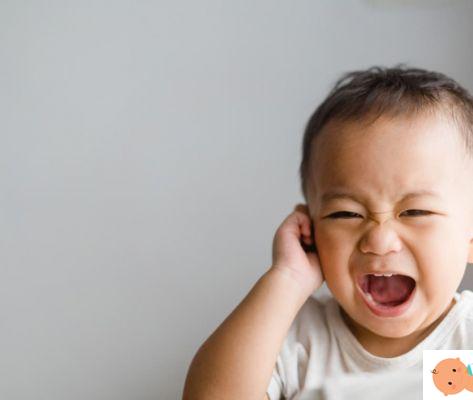 Otitis in children is a disease that makes both the child and the parents suffer a lot, who see him suffering from earache. When they are very young, pain and crying are accompanied by the action of touching the auricle, a clear sign that there is something wrong even if the child cannot communicate it. On the other hand, when they can tell where they have pain, otitis becomes an enemy to fight with the right therapy, often several times in childhood, being one of the most common diseases of children (preceded only by colds). In some cases, however, the consequences of otitis in children cause long-term effects, fortunately no longer accompanied by pain but only by discomfort: this is the case ofcatarrhal otitis in children, a very widespread declination. What are the causes, symptoms and treatments of this particular form of otitis caused by the mucus that settles, in the form of phlegm, in the ear generating the typical sensation of pressure?

What are the causes of catarrhal otitis in children?

Catarrhal otitis is triggered by increased mucus secretion in the ear, often as a result of untreated or unresolved acute otitis media. Otitis in children in turn is caused by an inflammation of the upper respiratory tract: a cold or for example a flu that test the little one not only during the peak of the disease but also afterwards, with consequences that can lead to in an otitis. It can more easily be considered as a consequence of an ear canal infection which may be of a nature bacterial or viral: these external agents arrive from the respiratory tract after a cold or other pathologies.

The inflammation of the otitis in the first instance occurs between the membrane of the eardrum and the structures of themiddle ear: we must not forget that the ear is connected to the upper airways, so the mucus that stagnates in the nasal canals and is not expelled, for example, can take the "wrong" way, introducing itself into the cavity where the ossicles that have the task are located to transmit sound to the hearing nerve and carry viruses and bacteria with it. The middle ear in this sense must be considered as a sort of cavity inside which the Eustachian tube carries air arriving from the nasopharynx, where the adenoids are located. If these swell, the tube becomes blocked and fluid accumulates in the middle ear.

When aacute otitis not treated properly results in an excess of mucus that once again settles in the middle ear, this causes the eardrum membrane to feel like a sensation of pressure, of fullness. Catarrhal otitis is no longer caused by infection, but is often recognized because the child suffers from hearing loss. In children, according to an article by the doctors of Humanitas Cellini, acute otitis media are more frequent because bacteria and viruses first undermine their immune system and also because, under the age of two, "their Eustachian tube is shorter. and therefore favors the passage of infectious agents into the eardrum cavity ". The consequences of acute otitis such as catarrhal ones are therefore in turn very frequent.

As reported in the paper "Acute Middle Ear Infections in Children" published in MSDManuals, the symptoms of catarrhal otitis media can be different from those of otitis media, as they do not predict pain in most cases (since it is no longer ongoing infection).

Catarrhal otitis does not cause acute pain in children, but only a feeling of fullness due to the presence of stagnant serum. Acute otitis media is instead an inflammatory state that can precede catarrhal otitis and have these symptoms:

These symptoms of acute otitis media can also be associated with fever, pain when chewing, headache and tearing, cough and other signs of congestion and, in severe cases, also otorrhagia, or bleeding from the ear.

How is catarrhal otitis treated in children

To intervene promptly, a visit to the pediatrician is necessary who, through observation with a special instrument, can diagnose catarrhal otitis. If the child has had a cold or flu, the pediatrician can finally, again through observation, recognize a previous acute otitis that has generated pain and inflammation and has evolved into a new, less painful form. With the visit, the pediatrician can assess the presence of mucus and direct parents to the appropriate therapy, which, according to the pediatricians of the Bambin Gesù Hospital, if it does not resolve itself and becomes chronic, a surgical solution may be needed. The transtympanic drainage it is a widely used procedure for this type of chronic effusive otitis. We proceed under total anesthesia and then with the instrument called otomicroscope; a small cut is made on the tympanic membrane, to aspirate the excess fluid and place the tube through the hole created. The goal is to improve the baby's hearing.

add a comment of Catarrhal otitis in children, what it is and how to cure it