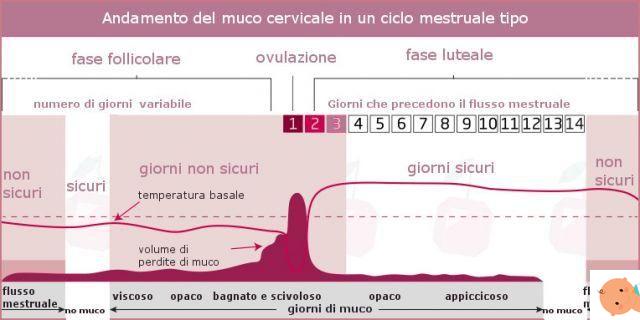 During the menstrual cycle, cervical mucus changes in both color and consistency and observing these changes can be helpful if you are trying to get pregnant: cervical mucusIndeed, it is a clear indicator of fertile days, but it is also one of the first symptoms of pregnancy.

In the fertile period the cervical mucus it is watery, thin and slippery and may appear similar to egg white. In fact, in the days preceding ovulation, the mucus production increases in order to create a more welcoming environment for spermatozoa and conducive to conception. During ovulation, therefore, the cervical mucus becomes more abundant, of a light color and slippery consistency and helps the sperm to go up the cervix to fertilize the egg. After ovulation, the amount of mucus usually decreases. A maturing egg grows within an enclosure, called a follicle, in the uterus.

To make more plentiful and fluid the cervical mucus it is above all the action of estrogen that is produced by the follicle.
To be able to monitor the fertile period also on the basis of cervical mucus, it is necessary to follow the course of the menstrual cycle and the changes in the mucus for several months.

Cervical mucus: how it changes

In general, the cervical mucus production cycle follows this pattern:

How to monitor cervical mucus changes

The observation of cervical mucus can therefore be useful if you are trying to get pregnant, in order to identify your fertile days with the Billings method.

To analyze the consistency and characteristics of cervical mucus we can proceed as follows:

Il cervical mucus plays a vital role in the conception process, nourishing and protecting the sperm as it makes the long and tiring journey to meet the egg.

The leucorrhea, that is the vaginal discharge in pregnancy, especially in the first few weeks, they are normal if they are thin, light in color or milky white and do not have an unpleasant odor. As pregnancy progresses, the consistency of the mucus also changes and, in the third trimester, can become more evident and thicker.

Vaginal discharge decreases and changes due to a fluctuation in hormone levels. Changes to the cervix during pregnancy also affect vaginal discharge: As the cervix and vaginal wall soften, the body produces excess secretions to help prevent infections.

During pregnancy, then, the mucus becomes denser and serves to form a real barrier against the entry of harmful microorganisms. This barrier is called a mucous plug.

TAG:
Thrush or oral candidiasis in the newborn: what it is, how to recognize it, how to cure it ❯

add a comment of Cervical mucus: how it changes during the month