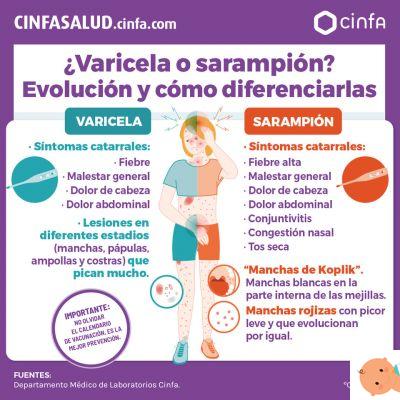 1. What can be done to relieve itching?
If the itching is very annoying, especially at night, an antihistamine can be given to the baby before bedtime. In addition to soothing the itch, it prevents bacterial infections that occur when babies scratch a lot.


2. Do alternative itch remedies work?
In the pharmacy you can find powders that give some relief. The only recommendation is to pay attention to inhalation: especially if the children are small, they could cause respiratory problems.

3. How to dress the baby when he has pustules?
Clothing should be light, white cotton and comfortable. Another tip is to keep it in a not too hot environment.

4. Can the bath be done?
Keeping the skin clean and well hydrated is important. So yes to the bath, which however must be short and done in lukewarm water. There are also no contraindications for washing your hair.

5. Does the sun hurt?
As long as there are scabs, the child must absolutely not expose himself to the sun. And even after, when the scabs are gone, but the skin still has small lesions, you need to be very careful. The best thing is to protect the little one with physical screen sunscreens (they are the white-paste ones that have a strong covering power) and keep the child as sheltered as possible with long-sleeved shirts and a hat with a visor.

6. What if there is a baby brother?
If the baby is breastfed by a mother who has had chickenpox, the baby is immunized for the first few months of life. this coverage disappears after 5/6 months. The advice is to use a few precautions: if chickenpox is around in the nursery school, do not keep it too close to the baby. In case of contagion, there is no need to be alarmed, but to consult the pediatrician and decide if it is appropriate to administer an antiviral based on acyclovir.


7. Are there any recommended foods?
There is no particular diet to follow. However, it must be taken into account that chickenpox could cause loss of appetite. So the little one should not be forced to eat. Acidic foods (such as tomatoes, oranges ...) which could irritate any blisters in the mouth are to be avoided. To prefer fresh foods such as yogurt, mozzarella ...
But the most important thing is to make the little one drink a lot: lots of water, but also fresh juices to entice him to drink.

8. Does the vaccine immunize for life?
Yes, the vaccine gives coverage exactly like chickenpox which once done cannot be repeated.

It's a very contagious infectious disease and exanthematous (i.e. causing skin rashes), caused by the Varicella zoster virus, of the Herper virus family. Together with measles, whooping cough, mumps and rubella it is among the contagious diseases for childhood.

The incubation period for chickenpox can last anywhere from 2 to 3 weeks.

The disease begins with low fever and mild general symptoms such as headache and malaise. A skin rash. Small itchy pink papules appear on the head, trunk, face and limbs for 4 to 5 days. The papules then become vesicles, pustules and eventually scabs, destined to fall off.

Chickenpox in children: photos to recognize it

Chickenpox is a contagious infectious disease caused by the Varicella zoster virus. It manifests itself with a skin rash and low fever. Small palules appear for 3-4 days on ...

How chickenpox is transmitted and when is it contagious

Chickenpox is only spread from person to person. The infection occurs in two ways:

The disease is very contagious especially in the early stages of the eruption. The contagiousness begins 1 to 2 days before the rashes appear and can last until the scabs disappear.

In general, it is recommended to isolate the patient to avoid the risk of contagion. It is recommended that children with chickenpox stay home from school at least five days after the first blisters appear.

During pregnancy, the virus can be transmitted to the fetus via the placenta.

How chickenpox is treated

Generally the disease is not cured, but, under medical advice, they try to relieve the symptoms (fever and itching).

Children with chickenpox should not be treated with salicylates (aspirin).

In cases most at risk of complications (adolescents, people with chronic diseases) antiviral drugs such as acyclovir can be used. Antiviral therapy is not recommended for otherwise healthy babies.

Duration and complications of the disease

Chickenpox is typically benign and in children heals in about 7-10 days. It tends to be more aggressive when contracted as teenagers or in adults.

Complications are rare in healthy children and most occur in infants, adolescents, the elderly and immunosuppressed people (people with HIV, people undergoing chemotherapy or being treated for other diseases). Cases of bacterial infections of skin lesions, encephalitis, pneumonia, arthritis, hepatitis can occur. Among adults, one of the most frequent complications is pneumonia.

The infection produces permanent immunity in almost all people. The disease rarely occurs twice. However, the virus is not eliminated from the body, but remains latent in the ganglia of the spinal nerve roots. In 10-20% of cases the virus awakens (usually after the age of 50) giving rise to herpes zoster, known as "Sant 'fire".

Since 1995, a vaccine has been available, consisting of the live attenuated virus. Some countries, including the US, recommend administration to all infants in the second year of life.

Vaccination is safe and well tolerated and is carried out in a single dose in children between 12 months and 12 years, in two doses for those over 12 years of age. It is recommended for adults and adolescents who have not yet contracted the disease. It is also indicated for women of childbearing age who have not had chickenpox, to avoid infection during pregnancy and consequent damage to the baby.

The best way to preventing disease is vaccination. Before it existed, about 4 million people a year in the United States became ill with chickenpox. Of these, 10.600 were hospitalized and between 100-150 died. Although only 5% of chickenpox cases were in adults, 35% of the deaths were adults.

TAG:
Varicocele and infertility: when it is necessary to intervene ❯

add a comment of Chickenpox in children: symptoms and treatment PHOTOS