Child food neophobia: how to get children to taste 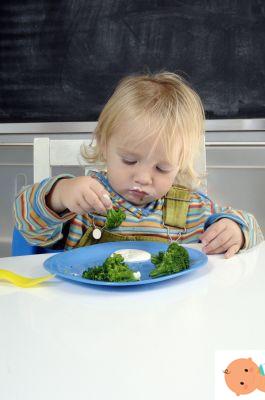 We all know how reluctant children are taste new things, especially after the first phase of weaning. It is therefore normal for children to have hesitation in trying new flavors and textures, but with a little patience this reluctance passes and it is possible to set up an adequate and varied diet. When, on the other hand, this closure towards new foods and flavors continues and, indeed, is consolidated more and more, we talk about food neophobia in children. Let's see what it is, what the causes and how we can intervene.

Neophobia comes from the Greek (from the Greek νέος, new, and φόβος, fear) and means "rejection, deep fear of new things". In this article we deal with food neophobia, that is the rejection of new and unknown flavors and foods.

Food neophobia describes a condition in which table preferences are overwhelming, phobic and have a high probability of having a social and nutritional impact.

Child does not eat: psychology

First of all it must be said that the neophobia it has its roots in the depths of the human soul since the dawn of humanity. It is, in effect, a instinctive protective attitude towards what is not known and potentially toxic or dangerous. The aversion to new foods begins to manifest itself around the first year of age, when there is the transition from only mother's milk - known and reassuring - to new foods and flavors. The neophobia then gradually reaches its peak up to 5 years. By now, however, the child should have learned the good eating habits introduced into the family and therefore should be more curious and serene about new foods.

The causes of food neophobia

There is a recognized association between autism spectrum disorder (ASD) and food neophobia. Individuals with ASD can be more resistant to change, so initial fears of trying new foods are likely to last longer. Research has also found that people with ASD are more likely to have strict preferences for specific textures, colors, and flavors of food, which may be maintaining their neophobia.

Genetic factors are also recognized as cause of food neophobia, together with psychosocial influences: if the parents themselves have food neophobia, this increases the risk that the child will suffer from the same problem.

Child who eats only a few things

Having said this, it is therefore quite common to see that the child is reluctant to try new foods and prefers to eat what he already knows, which reassures him and of which he is certain. However, the problem arises when the child refuses many foods, even important ones, such as fruit or vegetables, and can experience nutritional deficiencies.

Two factors have been shown to contribute to the rejection or acceptance of fruit and vegetables: food neophobia and "picky / demanding" diet.

La childhood food neophobia it is, as we have seen, the reluctance to eat new foods. On the contrary, i picky or fussy eaters they are children who consume an inadequate variety of foods by refusing a substantial amount of foods, both familiar and unfamiliar.

It is therefore important to evaluate which variables can influence the development or the expression of these problems. For example, some factors should be considered such as

Read also: How to make children love (and eat) vegetables

How to teach children to eat everything

They could develop behavioral interventions, focused onearly exposure to important flavors and foods, such as fruit or vegetables, to alleviate food neophobia and thus promote the prompt acceptance and independent choice of fruit and vegetables, as well as other essential foods.

for diagnosis a is used Food Neophobia Scale (FNS) developed by Pilner and Hobden: participants respond to these statements, ranking them numerically (7 strongly agree to 1, strongly disagree) to obtain an overall score. The higher the score, the more neophobic an individual is. A specification was also developed Child Food Neophobia Scale (CFNS) with questions asked for children and answers from their parents.

How to overcome neophobia

Il treatment of food neophobia may include one or more of the following approaches, depending on the diagnosis and individual needs:

TAG:
Babies in the sun ❯

add a comment of Child food neophobia: how to get children to taste