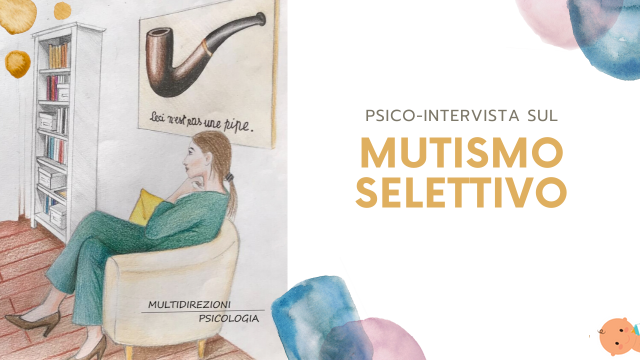 Selective mutism in the latest edition of DSM 5 was included among the anxiety disorders. In fact, it is a speech block that occurs in social contexts in which the child is expected to speak.

To answer all doubts on the subject, in light of what is reported in DSM 5 °, the latest edition of the Diagnostic and Statistical Manual of Mental Disorders, published in Del Paese in April 2022, mymodernparents.com interviewed Claudio Longobardi, clinical developmental psychologist, researcher in typical and atypical developmental psychology and psychopathology at the University of Turin and member of the scientific committee of the Aimuse association. What is the DSM? The DSM, acronym for The Diagnostic and Statistical Manual of Mental Disorders, was born on the initiative of the American Psychiatric Association and the international reference text on mental health. Hundreds of international experts took part in the realization of the fifth edition, which required 10 years of work. In Del Paese is edited by Raffaello Cortina.

The child with selective mutism would like to speak but cannot?


That's right. Her words stop in his throat and he can't get them out. It usually happens for the first time with the entrance to kindergarten, but sometimes even after, starting from primary school.

How do you know if it is selective mutism or simple shyness?

It usually appears quite clear especially to parents as a child who is just shy says a few words anyway. If, on the other hand, the child is affected by selective mutism at school or kindergarten, he never speaks or whispers a few words, in a low voice. In practice, the disorder is the most striking expression of the emotional distress that the child experiences when other children or teachers expect him to speak. (You may be interested in the article on Yoga for children)

There are hypotheses that instead argue that the origin may be neurobiological that is linked to a problem that involves the brain and not emotions ...

It is true that these hypotheses exist, just as there are others that believe it is linked to an ineffective language learning, however the international scientific community refers to DSM 5 which includes it among the anxiety disorders.

Are there any predisposing factors for the disorder?

First of all, the child's temperament: not very extroverted, taciturn, often (though not always) shy. Then there is the familiarity or a story of shy parents, who tend towards isolation and social anxiety and who therefore offer a less than ideal model for social interaction through language.

Does the attitude of the parents have its weight?

Yes, if the mum (or dad) is very anxious, they make the child feel that his silence is worrying or reprehensible, the situation worsens. Do not insist that the child speak. Those who have this problem already tend to feel ashamed, embarrassed, to be mortified by their own helplessness because the words "do not come out": the attitude of the parent can do a lot, both for good and for bad.

What is the best attitude parents should have?

Be calm, manage anxiety and do not focus on the problem, do not insist that the child speak when he cannot, so as not to send him the dangerous message of holding him responsible for what is happening. But the role and behavior of teachers is also of fundamental importance, given that in the vast majority of cases it is precisely at school that these children do not speak.

What are the treatments and prospects?

First of all, we must intervene promptly: the sooner we start working on the problem, the greater the chances of controlling it. It must be said that a child suffering from selective mutism over time could become an anxious teenager, because the anxiety disorder could in fact persist. Treatment depends on the age of the child: before the age of six, indirect therapy is used mainly through the so-called “parent training”. In other words, we work with parents to teach them to relate to the child in the right way and to become effective and reassuring “linguistic mediators” for him. From the age of six, on the other hand, it is also possible to act on the child, mainly using cognitive-behavioral psychotherapy. Taking action as soon as possible prevents the child from losing confidence in himself, with what he can achieve for the quality of his life.

What should teachers do?

Teachers should be trained by a psychotherapist through the so-called "teacher training"Both to understand selective mutism and to relate to the child on a relational and didactic level, just as it is important for parents to be. Ideally, the specialist who follows the child and the parents should also intervene on the teachers, on their way to school.

What should be done first when a child manifests the problem?

In the first place, it is the pediatrician who is consulted and establishes that it is not a question of a delay in language learning or of shyness but of selective mutism. At this point the child is referred to the child neuropsychiatrist or psychologist, who is responsible for making the definitive diagnosis. The treatments are essentially psychological: only in highly selected cases, with older children, is it sometimes used for short periods of family therapy, the use of which is known to be controversial. The sore point lies in the fact that child psychotherapy, parent training and intervention on teachers are unfortunately all the responsibility of the family. The financial outlay is important and can hinder the possibility of treating the child.

How many children are there with selective mutism?

It is hypothesized that in Del Paese there are about 40 children with selective mutism, in a male to female ratio of 1 to 2. In reality, it is likely that the figure is underestimated because there are cases that escape diagnosis and others in which the diagnosis is misplaced, confused with other anxiety disorders.

Where to go for help?

The Associazione Del Paesena selective mutism (AIMu.Se.) welcomes parents of children affected by the problem with the aim of spreading and improving knowledge of the disorder. Psychotherapists who study and treat the manifestation are also part of it. There are also parents who can share their experiences with others as well as teachers who can give indications on how to manage the teaching of the mutated child. By contacting the association you can have the names of the specialists who deal with selective mutism closest to your city.

In the FORUM of mymodernparents.com you can ask other parents for advice

add a comment of Child's selective mutism: when speech is blocked