Childbirth with a suction cup: when to do it and what are the consequences 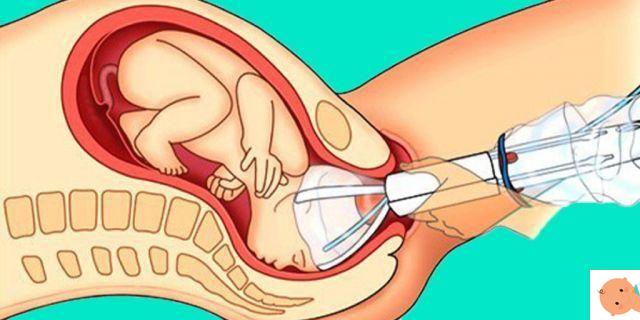 Childbirth with a suction cup: when to do it and what are the consequences

Si gives birth for thousands of years, but fortunately today the success rate of the parties is much taller than it used to be, both for mom and for child. For this to happen, medicine, technology and some tools come into play. Today we talk about the suction cup delivery.

La sucker it is a tool that serves to facilitate the exit from the vaginal canal of child. One is used sucker, which is shaped like a suction cup, made to adhere to the head. While the scientific community agrees in always favoring spontaneous vaginal birth, sometimes the operative one is necessary precisely because the child is unable to get out.

How is the suction cup made for childbirth

La sucker that's exactly what the word itself says: one rubber sucker which, adhering to the baby's head, allows the medical staff to extract it from the vaginal canaland by aspiration, facilitating its rotation and exit. The most recommended and used in the country is the type almighty, as it is associated with minor risks for the newborn.

When resorting to vaginal operative delivery

The suction cup is a tool that is used only in some cases, to avoid fetal suffering and as an alternative to caesarean delivery, which remains the last possibility, where possible, to be evaluated. In particular, it is suitable for:

In any case, the use of the obstetric sucker is carefully evaluated by medical personnel and performed by qualified personnel when any other attempt at Natural childbirth It is not possible.

When you don't need to use the suction cup

There are also some contraindications use of obstetric sucker, which medical staff take into account when presenting fetal suffering or the mother ran out of strength during the labor and can no longer push.

How does birth with an obstetric suction cup take place

If the situation begins to make people suspect the need to resort to obstetric sucker (usually after three hours of pushing active in nullipare), the medical team first of all checks the CTG trace to evaluate the whole clinical complex, not just the fetal beat. Not always, in case of fetal hypoxiaand, it is recommended to use the sucker. Subsequently, she verifies that there are no contraindications to use: at this point, the patient is informed about how the procedure will take place, but also the consent (verbal).

Physical factors are then considered: complete expansion, breaking of membrane, location cephalic and correct of the fetus, and only then is the application of the suction cup on the skull of the baby, then starting to suck and pull when the mother pushes.

Il Natural childbirth it is always preferable to any other type of birth, but unfortunately it is not always possible. Before resorting to the Caesarean section, however, the possibility of performing a operative delivery with suction cup or one with scissors. Of the two tools, the sucker is preferable to the second because it is considered more safe for baby and mom. In general, the forceps have been almost completely replaced by the suction cup and by caesarean delivery.

The Risks of the Obstetric Suction Cup

In reality the obstetric sucker it has no particular risks, as long as it is used in compliance with the indications, such as complete dilation, quite right positioning of the fetus and preparation of the medical staff. It is not even necessary to carry out an episiotomia and it's not because of lacerations more than natural childbirth. Noon is not even necessary anesthesia and it is not dangerous for the child: the most common consequences, although rare, are bruises on the head, bleeding of the eyes, shoulder dystocia or jaundice.

La sucker for childbirth is a tool used only in a few cases, when labor comes to a halt, the mother no longer has the strength to push and the child is in pain. But it is a simple practice that has no great risks, if not some small consequence on the child that can be resolved in a short time.

add a comment of Childbirth with a suction cup: when to do it and what are the consequences