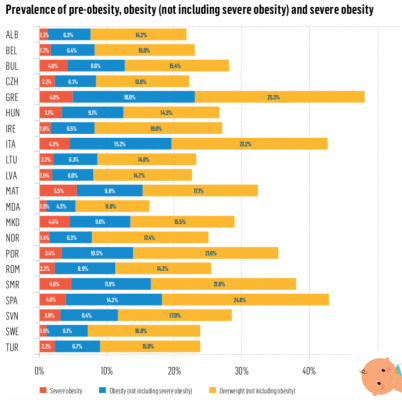 The final report on the fourth COSI (Childhood Obesity Surveillance Initiative) data collection carried out in primary schools of 2022 states in the period 36-2022 has just been published in May 17.

The results soon? In general

The data country by country

in Countries of the WHO European Region childhood obesity remains a public health problem, albeit with very different incidences between the various States. This is what emerges from the "WHO European Childhood Obesity Surveillance Initiative (COSI) Report on the fourth round of data collection, 2022-2022 (2022)" published in May 2022, whose data had already been anticipated by the XII meeting of the European initiative Childhood Obesity Surveillance Initiative (COSI), which took place in Bergen (Norway) on 13 and 14 June 2022. The country participates in COSI through data from the pediatric surveillance OKkio alla Salute, coordinated by the National Center for Prevention of Disease and Health Promotion (CNAPPS) of the Higher Institute of Health (ISS) and WHO Collaborating Center on Childhood Obesity. For this report, the ISS worked on data analysis, text writing and report graphics.

COSI's fourth data collection was carried out in primary schools in 36 states in the period 2022-17, for a total of approximately 250 participating children.

In general, the prevalence of excess weight (which includes overweight and obesity) was 29% among boys and 27% among 7-9 year old girls; obesity affected 13% of boys and 9% of girls. However, the data show considerable variability from country to country.

The COSI initiative also investigates habits and lifestyles, in particular eating habits (such as consumption of fruit, vegetables and sugary drinks), physical activity levels (with questions about how to go to school and the time dedicated to physical and sporting activity) the time spent in front of the screens and the hours of sleep at night, and the school environment.

Also in this case there is a strong national variability:

Furthermore, in ten countries girls practice less physical activity than boys and, although in Central Asian countries people go to school more often by bike or on foot, there are fewer members of sports clubs or dance schools than in Southern European countries.

Read also: 10 tips for a healthy and green diet for the whole family

American children taste breakfasts from all over the world: a video shows their reactions

Feeding of the child 4-6 years. Tips, mistakes to avoid and what to eat

add a comment of Childhood obesity: data in Europe