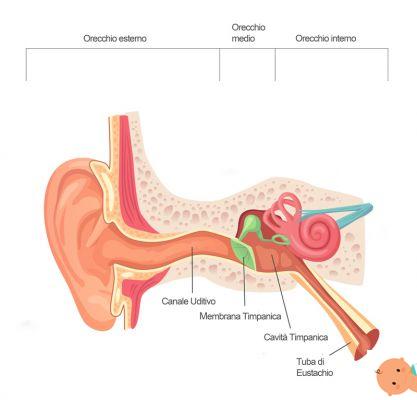 "Mom, my ears hurt so much": unfortunately it is not uncommon for children to suffer from otitis, an ear infection that can be viral or bacterial in origin. After colds and respiratory tract infections, otitis media is the most common disease in children, particularly in the first three years of life. After six years, the disease regresses. As for the season, otitis is more common from January to March.

The main cause: the cold

The trigger is almost always a cold. In fact, cold viruses not only spread in the nasal mucosa, but can also penetrate the Eustachian tube.

The two Eustachian tubes form the link between the throat, nose and left and right middle ear. Through these channels, air flows into the eardrum case and the pressure in the middle ear aligns with that of the air outside. If one of the horns is blocked, this mechanism no longer works. The flow of air into the middle ear is interrupted and the air present is reabsorbed, thus causing a reduction in pressure.

Both factors, ie the closure of the Eustachian tube and the decrease in pressure in the middle ear, cause an accumulation of mucus in the eardrum case. This is dangerous, as the liquid is an ideal habitat for microbes, which often transform "normal" middle ear otitis into purulent inflammation.

Why does it often happen to children?

On the one hand why their immune systems are not yet fully mature, on the other hand why in children, the eustachian tubes are shorter and flatter than in adults; this means that viruses and bacteria present in the throat and nose area reach the middle ear more easily. From school age, this problem occurs much more rarely.

Some children are more at risk than others. Here because:

What are the main warning signs of otitis for parents?

In all these cases it could be an episode of acute otitis media.

What to do if there are signs of ear infection?

The first thing to do is to consult the pediatrician

The administration of a drug capable of relieving pain (paracetamol or ibuprofen) is also generally indicated.

What does the doctor see by looking in the ear?

When looking inside the ears with the otoscope, the pediatrician - or otolaryngologist - specifically checks the ear canal, looking for pale or redness (a sign of inflammation) and the eardrum membrane.

In a healthy baby, this membrane is a delicate, light-colored skin with a slight indentation in the center. It is so smooth that it reflects the light used for the exam. In the child with otitis, the eardrum membrane faces outward and appears yellowish-red in color.

If too much mucus and pus accumulates in the middle ear, it can even burst. In this case, a yellowish liquid, sometimes mixed with blood, leaks out of the laceration and pours into the ear canal.

What to do in case of otitis: treatments and remedies

Otitis, a middle ear infection that can accompany or follow a cold, can be very painful for the baby. Pain relievers such as acetaminophen or ibuprofen can be given to relieve pain.

There are also medicines in drops to insert into the ear, but be careful: you don't have to never put drops in the ear without the doctor's consent. In fact, if there is a perforation of the eardrum membrane, detectable only with the otoscope, the drops can cause further damage by coming into contact with the structures of the middle ear.

Sometimes, otitis clears up on its own within a few days. Other times it is necessary to use an antibiotic (the first choice is amoxicillin): it is the doctor who decides when to use it, based on various considerations.

What are the medicines to keep at home when I have children? Here is a list of the 'essentials', suggested by Marco Pandolfi, deputy director of the operational unit of ...

The possible complications of otitis

In the vast majority of cases, otitis is a very annoying infection, but without consequences. Sometimes there may be a temporary reduction in hearing: if this lasts more than a few weeks, it is advisable to consult an otolaryngologist.

In very rare cases it can have more serious consequences, such as inflammation of the meninges, mastoiditis (infection of a bone located behind the ear), deafness, which can occur if the infection is very strong and is not recognized and therefore treated in time.

Onion as a natural remedy. Does it really work?

Onion wraps are a traditional home remedy for earache

Many people claim to benefit from this remedy, which would reduce inflammation while relieving pain. It must be said, however, that, according to a document produced by the service of the American National Library of Medicine that deals with evidence of efficacy, at the moment there is not enough scientific data to say whether the remedy really works or not.

Can otitis be prevented?

Guidelines of the Del Paesena Society of Pediatrician

The guidelines also point out that pneumococcal vaccination appears to reduce the risk of experiencing a first episode of acute otitis media. In this sense, it would be a positive "side effect" of vaccination. At the moment, however, there is no evidence that the flu vaccination can also help against ear infections.

TAG:
Strep throat: EVERYTHING you NEED to know ❯