Children's emotions, all there is to know 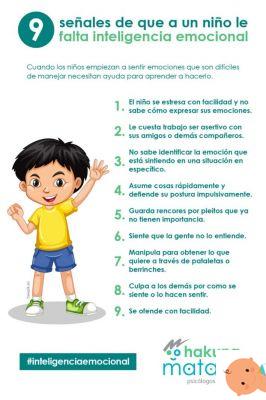 Source: Shutterstock
The little ones try emozioni that need to be interpreted. And helping them recognize them is very important from an early age. In this article we have collected many insights on the role and management of emotions in children.

What are emotions and how they affect a child's learning

Second Daniela Lucangeli, Professor of Developmental Psychology at the University of Padua and expert in learning psychology, le emotions were mental and physiological states that act and condition people. They are associated with psychophysiological changes for internal stimuli (heartbeat, salivation, redness, etc.) and external (thoughts, noises or other that generate fear or anxiety). Generally, they have been learned or are characteristic of people's disposition. “So they are part of the memory, like the language we speak, like the studies we do at school. Pain, for example, arises to warn us of a risk factor, suffering is instead the memory of pain both on a psychic and cellular level ", said the scholar.

“It may happen that, at some point, instead of functioning as a help circuit, emotions go into dysfunctional short-circuits. That is, they become elements that do not allow us to function well. What we call the emotional short circuit takes place: emotions generate such suffering that one enters a risk and gets stuck. So many of the behavioral and mood disorders arise from emotions that generate strong suffering not well identified by the educational context ", explains the doctor.

«Educators, to help their children, must work on suffering, because the memory of pain must be responded to by changing the attitude that caused it. We must help our children / pupils to remove errors, not to judge them, not to cause them suffering and to find together a better strategy to help them. The right attitude is to recognize in the other the sacredness of her world, so for a child: his personality must be known, modified, not replaced. He must then be bought back the principle of the right to make mistakes, which belongs not only to our children, but also ours ».

According to Prof. Lucangeli, it is also necessary learn to apologize, a way to help release guilt, e promote forward-looking optimism: we have been educated to the idea that it is difficult to change the things that are not right, but, instead, it is not true. To change the emotional attitude, one cannot help but relearn emotions warm (hot), because they are the access keys to the soul, to the living and profound person.


Read also: What are emotions and how they affect children's learning

Babies know all too well how to communicate their moods. But are they able to recognize the emotions of adults? To answer this question, a research of theUniversity of Geneva (UNIGE), who analyzed the reactions of some babies to see if they were actually capable of associate emotions with their real meaning, or if rather they limited themselves to to distinguish the expressive and vocal characteristics of the various moods.

At first the small participants were placed in front of one black screen listening to a neutral, happy or angry voice for a total duration of 20 seconds. Subsequently, the babies were shown for 10 seconds pictures that portrayed adults in the throes of a clear emotion (anger or happiness).

The study found that after listening to a happy voice for 20 seconds, the children they tended to linger longer in front of the photos that expressed angerThis is because the little ones they were surprised from the juxtaposition and this has allowed scholars to affirm with certainty that even after only 6 months of life, children they are perfectly capable of processing perceived information (both visual and auditory) and therefore recognize the various moods.

Le emozioni they are like a spectrum of colors, they pass through us, but we are not always able to give them a name. For this reason it is important to learn from an early age to recognize and manage them, for a balanced development. Sara Agostini, teacher and head teacher, tells them in a simple and fun way in the book The six stories of emotions, a useful tool to play and understand what you feel together with your children.

Here, according to Agostini, in ways in which mom and dad can "train" their children to recognize emotions:

An example of how emotion recognition can be practically applied is the management of a conflict situation, such as a litigation between brothers, or between friends. “At school we ask children to put yourself in the other's shoes, asking him what led him to behave a certain way. It also works through stories, identifying with the characters of a story. Then we ask the children to wait a moment before presenting emotions, and before reacting. Internalize, talk, say how it feels. This work helps to develop a very important ability, which in the future will help them in relationships, of all kinds ”, explains Agostini.

Read also: How to teach children to recognize emotions?

How to teach emotions through colors

«Learn to know your emotions, understanding, separating and identifying them allows you to know yourself better and build a bridge with the deeper desires and needs of each individual "explains Francesca Vavassori, psychologist who created the" I see everything pink "path to teach emotions to children through colors.

According to the psychologist, i colors are ideal toolsi to teach children, even younger ones, to recognize and express the emotions they feel with more awareness. To do this, you can use a playful approach: «In" I see everything pink "I welcomed the children in a structured space: each material chosen was positioned in a thoughtful and meaningful way, following some basic theoretical principles of the arts therapies. I worked with up to eight children to give them proper attention. To the small group I presented an emotion starting from the basic ones, such as anger, fear, joy, sadness, disgust, and I asked them to associate a color and / or a shape with this emotion », says Vavassori.

«Often the colors chosen to represent emotions were similar, as if to remind us that in each of us, even in children, there is a collective unconscious. The little ones associated red or black with anger, yellow with joy, blue with sadness, and so on. It is no coincidence that colors have had in history and still have a symbolic and emotional value that distinguishes them ».

«After the choice and the representation of the emotions I had the children tell, only if willing to share in a group, how their drawing was born, if the emotion felt remembered some episode in particular and where they felt it in the body. Being listened to by others and being able to share their stories, without judgment, was a fundamental moment of the path, because it allowed them to re-elaborate and become aware of their own experiences welcomed and contained by the group. Furthermore, the children learned that emotions have a bodily resonance and that this signal can be really useful for understanding their own experiences and managing them ".

This path can also be repeated at home with mum and dad, you just need to leave room for the children of express their inner world through drawing in a suitable, safe and secure place.

Read also: How to teach children to manage their emotions through colors

How to teach children to manage their emotions

"Many parents neglect to teach their little ones to pinch emotions," explained Laura Jana, fromAmerican Academy of Pediatrics, "but it is as important as any other skills to pass on to our children." In fact, the choices they make on important issues will depend on this, such as: what to eat, how much to sleep, how much to study, etc. Here are some tips.

Read also: How to teach children to manage their emotions

Mood management for our children step by step

For a growing child, understand how manage your mood it is as important as learning to walk and talk. Especially for the little ones it becomes crucial to learn the right emotional approach to face everyday challenges (school, sport, social relations ...) without becoming slaves of good or bad mood.

But how can a child learn to become "master" ofand their own emotions? Emotion control is not a natural practice: some strategies are needed. Here are some steps to learn how to do it, taken from the WebMd site:

Read also: How to teach mood management to our children

How to stimulate emotional intelligence

Donatella Celli she is the author of the book "The feeling of children" (New techniques), aimed at educators and teachers precisely to help them in catalyze in a positive, constructive and educational way what the little ones feel. Through clear and simple methodological indications, the author provides guidelines to deal with complex situations and to facilitate learning. Here are some ideas, according to Celli, that mothers or fathers can easily replicate even at home:

Read also: How babies feel: 5 ways to stimulate their emotions

The importance of the game to "learn" emotions

"The game, which always represents some small fragment of 'human comedy', is precisely the means by which children learn to explore and know the world, and therefore their own and other people's emotions". He states it Di Pietro, a playful pedagogist, to whom we asked to illustrate some fundamental aspects of the relationship between play and emotion, starting from an analysis of the most common play activities of childhood. Here are some of them.

Read also: The importance of the game to "learn" emotions

It is very important to get the little ones used to recognizing emotions. A child who is able to verbalize what he is feeling will find help more easily, and, in turn, will be more empathetic with others. Here are some activities to explore the world of emotions.

Often children are overwhelmed by strong feelings which they cannot give a name or an explanation. This is why it is so important to get the little ones used to recognizing emotions. A...

Parents and children, that's why emotions should not be suppressed

According to a study conducted by researchers from the Washington State University Vancouver the tendency to repress negative emotions in front of the little ones, not only it doesn't do much goodon the contrary, it has some negative effects on their way of acting. Sara Waters, principal signature of the research, in the journal Emotion, explained that data to support the theory were gathered by observing the behavior of 109 parents - mothers and fathers - in the relationship with their children following an unpleasant episode.

But then how should you relate to your children when there is something wrong?

“If the children sense that something bad is happening, but the parents continue to behave normally, they are confused, because conflicting messages are sent,” Waters said. “So let the children see the whole picture. This helps children learn to regulate their own emotions and understand that problems can be solved. It is therefore always better to explain to them why you are angry and tell them what you will do to improve the situation ».

Read also: Parents and children: repressing one's emotions does not make the child feel better TAG:
Families with a child with ADHD can benefit from practicing mindfulness ❯

add a comment of Children's emotions, all there is to know