Children: the importance of learning to write well in cursive 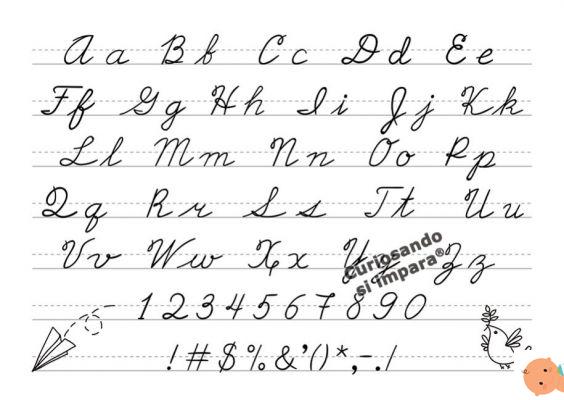 In the Del Paesena school, the teaching of calligraphy was abolished in 1985. Since then, interest in beautiful writing has declined from year to year. So much so that primary schoolchildren often have handwriting on the verge of legibility, especially in italics, so much so that the teachers ask them to write the themes in small caps.

Nothing could be more wrong. Indeed more and more studies are showing how essential cursive is for children's learning and cognitive development.

Read also: Because according to science it is important to know how to write in italics

In the newspaper Repubblica Marco Belpoliti highlights the importance of beautiful handwriting starting from a fact: in American companies at the forefront of new technologies (Google, Apple, Yahoo), the children of employees attend schools such as the Waldorf, where every electronic equipment is banned; to the tablet and the electronic board, the famous Lim, manual activities are preferred such as: handwriting, knitting, wood inlaying... all disciplines that would favor more problem solving, synthesis and above all psycho-motor coordination skills.


The article also reads about research conducted in the United States with children between the ages of three and five. Divided in two, one group of children was taught to write using the keyboard, the other group by hand.

Result: those who had learned to write by hand showed a greater memory with respect to the orientation of the letters, they perfectly distinguished the "p" from the "q"; furthermore, undergoing magnetic resonance imaging, these children showed brain activity similar to that of an adult; they also read faster, since they recognized letters better than computer-educated children.

This result stems from the fact that "handwriting combines various complex aspects together: the linguistic one (the letter as a symbol that relates to sound), the graphic one (the letters have their own precise shape), the psychological one (the letter is also a way of perceiving and expressing oneself) ".

Read also: Correct pencil grip: how to teach it to children

Furthermore, italics are the representation of the writer's personality. It is the most advanced form of writing: "it allows the immediate passage from thought to paper, in fact it establishes a relationship of continuity between body, gesture and sign".

The gesture of handwriting harmonizes manual and intellectual activity together. Writing well is also a physical act of enjoyment and pleasure. It forces you to slow down and experiment with different graphic forms, forces children to face the chaos of the doodle, to order it and make it clear, in a certain sense it teaches us to face fears and disturbances.

"If one no longer writes by hand, another of the fundamental rites of passage is lost, and at the same time the memory of how many emotions and disconcertments the act of writing entails in the slow process of becoming an adult disappears "concludes Belpoliti.


TAG:
Children: the difference between swab and serological test ❯

add a comment of Children: the importance of learning to write well in cursive