Children: what is the "time-out" technique and what it consists of 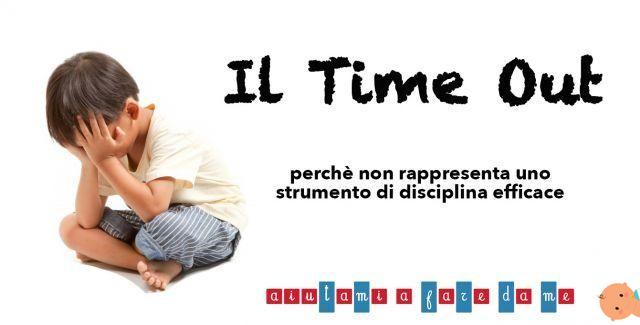 The "time-out" technique is certainly a brilliant solution for some parents: in fact, when a child spends a few minutes sitting alone, he becomes calm and cooperative. Still, others say it doesn't work: this is because their children, when forced to "time-out", cry and call mom and dad instead of sitting quietly or get even more agitated.

The "time-out", in the context of parenting, is equivalent to the temporary removal of a child from an environment in which unacceptable behavior has occurred. The goal is to remove him from a pleasant context, thus encouraging him to remove the offensive behavior. It is an educational and parenting technique recommended by some pediatricians and developmental psychologists as an effective form of discipline.

If you remember the classic "Sit in that corner!" or "Get behind the blackboard!", then know that those were and are forms of "time-out". In fact, often a corner of the house or a similar space is chosen in which the child must stand in silence, standing or sitting, for a few minutes during the "time-outs".

However, according to a recent study by the "Oregon Health and Science University" in Portland (USA), 85% of parents who use the "time-out" strategy make mistakes that reduce the success of this educational technique.


The errors are as follows:

If you want to learn this technique to educate your child, it helps to understand how to make it really effective and how you can adopt all the tactics that are part of it.

"Time-out", where it originates from

The term "time-out" became popular in the United States thanks to a reality show called Supernanny, but the technique was first developed in the XNUMXs as a more humane alternative to the harsh punishments that were common at the time.


The concept of "time-out" was invented in 1958 by the researcher Arthur Staats, now retired at the University of Hawaii at Manoa, when teachers and principals still systematically slapped children and parents spanked or whipped their children.

Nowadays, the video of a child being slapped in school goes viral quickly because it is considered shocking and most parents have fortunately adopted an educational approach that is not based on corporal punishment in recent years. After all, decades of research have shown that children who have been regularly spanked as young children are more likely to become aggressive when they are older, to suffer from anxiety and depression, or to engage in substance abuse.

But "time-out" isn't always beneficial. "When the child has a tantrum or an emotional breakdown, he may be overwhelmed by what he feels and unable to control his emotions," said Daniel J. Siegel, professor of psychiatry at the UCLA School of Medicine ". Rather than having him sit in a chair in the corner right away, it's important to let him know that you are in tune with what he is feeling.

Furthermore, most experts believe that "time-outs" are effective as long as they are used correctly and in the right situations and especially with children over the age of 3. "They should be reserved for particular pranks that can put the child or someone else at risk of getting hurt or in danger, for example," said Ari Brown, pediatrician and writer.

YOU MAY INTEREST: Emotional education, 7 tips to manage children's emotions

The most common mistakes when using the "time-out"

What are the alternatives to "time-out"? Here are some of them:

A long time has passed since Dr. Staats first wrote about "time-outs" and psychologists and scholars have changed them for the better, making them both sweeter and more effective. Here are the various aspects that currently distinguish an effective "time-out" technique.

If the child refuses to go into "time-out"

What happens if the child does not want to go into "time-out"? Here are three ways parents can behave.

What you can do while the child is in "time-out"

When two children fight, knowing who started it is less important than putting both of them on time-out for misbehavior. If you blame the wrong one, you run the risk of "punishing" the wrong child. Make sure you have the two little ones stay in different areas for "time-out".

Putting a toy into "time-out"

If your child is misusing a toy, for example, by throwing it, you can consider putting the toy in "time-out" (and not the child). It is a way to teach your child self-control and reduce bad behavior without making your child spend too much time in "time-out". To do this, just take the toy away. After the minutes have passed, tell the child why the toy was in "time-out" and ask your child to repeat it to you.

add a comment of Children: what is the "time-out" technique and what it consists of