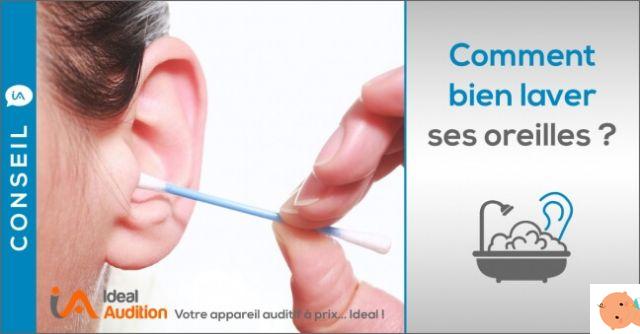 Need clean the ears of babies? And how? Can I use sprays, ear sticks or hydrogen peroxide? The answers of Dr. Pasquale Marsella, head of the Complex Operative Unit of Audiology and Otoosurgery of the Bambin Gesù di Pediatric Hospital of the city on the most common doubts of mothers on the topic "cleaning ears".

1. Do children's ears always need to be cleaned?

Earwax does not need to be cleaned

First of all, you have to ask yourself what you need to clean your ears from. If we refer to the cerume, actually it's not about dirt. Earwax is in fact a wax that some glands, called ceruminous, produce so that the skin of the external auditory canal is protected from external agents and creates an environment hostile to the survival of some germs. Once secreted, the ear wax is automatically pushed outwards, in a sort of self-cleansing, which therefore does not require additional cleaning operations. Obviously, if there is abundant ear wax visible on the outside, it must be removed, mainly for an aesthetic reason.

2. How to clean children's ears?

The cleaning of the auricle it must simply be done with water and a mild soap during the daily washing operations, using only the fingers and without reaching inside the ear canal with any instrument. Cleaning can also be done while shampooing or showering with the same cleanser used for the hair. The soap or shampoo foam must then be rinsed well, to prevent soap from stagnating in the duct which could cause irritation.

3. After washing, how to dry the inside of the ears?

The ear should be dried, up to the mouth of the external auditory canal, with a towel, avoiding to use toilet paper or paper towels, because a few pieces, even small ones, could come off and remain inside the duct with the risk of causing infections. If you want to dry the inside too, that's enough the hot air from the hairdryer. And even if a little water remains, it does not cause any discomfort, the important thing is that the soap does not remain.

Ear sticks can be used just to clean the folds of the auricle (as it is specified on the product labels). They should never be used instead to clean the inside, because as a general rule they must avoid introducing any foreign body into the duct: at best, in fact, this operation can push the earwax to the bottom and cause the formation of a plug, but it could also damage the skin of the ear canal or cause infections if some filament of wadding remains inside.

Read also: How do you clean your newborn's ears?

5. Are ear sprays or saline useful for cleaning the ears?

They are just as useful as soap and water, they don't have any extra effectiveness.

6. Is cleaning the ears with hydrogen peroxide okay?

I do not recommend it: being a medicinal substance it can be indicated only in particular situations identified by the otorine after the visit, while it can be counterproductive in others, for example if the tympanic membrane has a perforation.

7. Ear drops: when should they be used?

The ear drops are oily and emollient products which dissolve and make the ear wax more fluid, facilitating its exit. They should only be used if a plug of earwax, and this can happen if there is a particularly narrow or tortuous duct that prevents it from spontaneously escaping and causes it to accumulate. And they should only be used after the pediatrician or the ENT have ascertained that it is a plug of ear wax.

8. What are the symptoms of having a wax plug?

and may involve one or both ears.

Confirmation, however, only occurs with inspection by the doctor. In fact, the same symptoms could also signal acatarrhal otitis, that is due to stagnation of phlegm inside the ear.

9. Why do some children have more ear wax?

The production of earwax, as well as that of sweat, is a individual fact: there are those who sweat more, some less, those who produce more ear wax, some less.

The ENT will decide the most suitable system for each case. It is usually removed with small pliers or aspirators. However, if it is a dried and hard cork, which completely occludes the lumen, it will be necessary to first apply emollient drops to soften it, after which it will take off with a ear wash. Absolutely DIY prohibited: the removal of a plug of ear wax must be managed by the ENT specialist!

How to behave at the sea or in the pool?

After swimming, in the sea or in the pool, it is important to rinse both ears well with fresh water: if salt or chlorinated water stagnates, in fact, the skin can macerate and, just like other parts of the body, it can undergo inflammation. and cracks; moreover, the hot-humid environment that is created inside the duct can favor the engraftment of germs, in particular bacteria and fungi, which can cause external ear infections. Rinse and dry the skin well it helps to keep it intact and maintains its impermeability.

How do you clean children's ears?

The cleaning of the ear can be done simply with water and a mild soap during the daily washing operations, using only the fingers and without reaching inside the ear canal with any instrument.

How do you remove a plug of earwax?

The ENT will decide the most suitable system for each case. It is usually removed with small pliers or vacuum cleaners.

TAG:
Cleaning and care of the teeth, how much do you know? ❯

add a comment of Cleaning children's ears: 10 questions and answers