Clear egg, blind or anembryonic pregnancy: what it is and what it entails 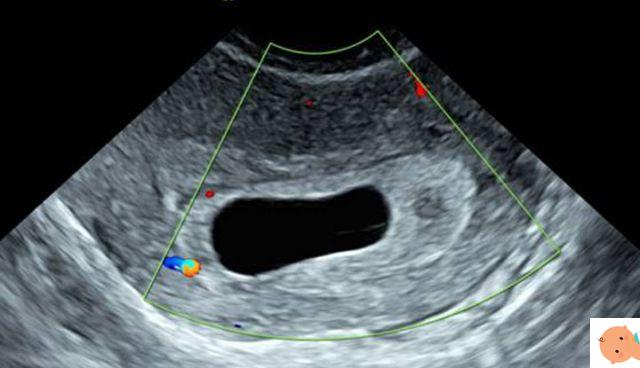 Anembryonic pregnancy: what it implies

Even when the egg and the sperm meet and they merge correctly, it is not said that one is established pregnancy: even if the fertilized egg is implanted in the uterus, it sometimes happens that no embryo develops and a miscarriage.

From conception to the first minutes of life (PHOTO)

From the encounter between that single sperm and an egg up to nine months later. The journey of life taken in pictures. Between growth and small, big progress.

What is an anembryonic pregnancy?

A anembryonic pregnancy (also known as clear or blind egg) is a clinical condition in which, as a consequence of the implantation of a fertilized egg in the uterus, neither an embryo nor its yolk sac develops. If this condition occurs, you may not find out until the end of the first trimester and a miscarriage.

Read also: Miscarriage: False Beliefs That Are Bad for Women

What if i have an anembryonic pregnancy?

Even if the pregnancy fails, you will still get a positive result on a pregnancy test, because the placenta begins to develop and begins to secrete human chorionic gonadotropin (hCG), the hormone these tests look for. At first, you might even have some common symptoms of pregnancy, such as fatigue, nausea and breast pain. Later, when hormone levels start to drop, these symptoms will subside and you will likely have spotting or bleeding.

At first you may notice some reddish-brown spots. You may later have cramping or bleeding as your hormone levels drop. If you have cramping or bleeding, or your uterus is not growing as it should, or if your doctor cannot hear the baby's heartbeat with a Doppler within about 12 weeks, you will have a follow-up ultrasound. If it is a case of anembryonic pregnancy, the ultrasound will show an empty gestational sac.

Read also: This is how life is born: how conception takes place

It is likely that you will have an abortion - that is, to expel the gestational sac and accumulated tissue - by the end of the first trimester, although it could happen sooner. The process of miscarriage it can take weeks, however, and once you discover that you are not carrying a baby, you may find that it is too difficult to bear both emotionally and physically to wait for a miscarriage.

If so, you could use medications to speed up the miscarriage process. Or you may decide to undergo a procedure: a curettage of the uterus for aspiration to remove placental residues after a abortion. The tissue will need to be removed if you have problems that make it dangerous to expect a miscarriage, such as significant bleeding or signs of infection.

When can I try to conceive again?

Some doctors recommend waiting to conceive until you've had the cycle, which will likely happen four to six weeks after abortion or tissue removal.

A Scottish study of over 30.000 women concluded that women who become pregnant within six months from a miscarriage actually have the best chances of having one healthy pregnancy. Those women had fewer miscarriages or ectopic pregnancies than women who got pregnant six to 12 months after their miscarriage.

However, while you may be physically ready to get pregnant again, you may not feel emotionally ready. Each woman faces the pain of early pregnancy loss in her own way, and some women find it takes months before they want to try conceiving again.

Does having an anembryonic pregnancy once mean that she is likely to miscarry again?

No. While you are likely worried about the possibility of another miscarriage, gFertility experts do not consider a single early termination of pregnancy to be a sign that something is wrong with you or your partner. Most doctors will wait until a woman has had two or three consecutive miscarriages to order special blood and genetic tests to try and find out what's wrong.

What is an anembryonic pregnancy?

An anembryonic pregnancy is a clinical condition in which, as a result of the implantation of a fertilized egg in the uterus, neither an embryo nor its yolk sac develops.

Pregnant after an abortion: can you try it right away?

There is no risk of getting pregnant after a miscarriage. If you get pregnant again quickly, it means that everything is going well and that the miscarriage was just a one-time occurrence.

TAG:
Urine in pregnancy, everything you need to know ❯

add a comment of Clear egg, blind or anembryonic pregnancy: what it is and what it entails