Clubfoot, what it is and how to treat it 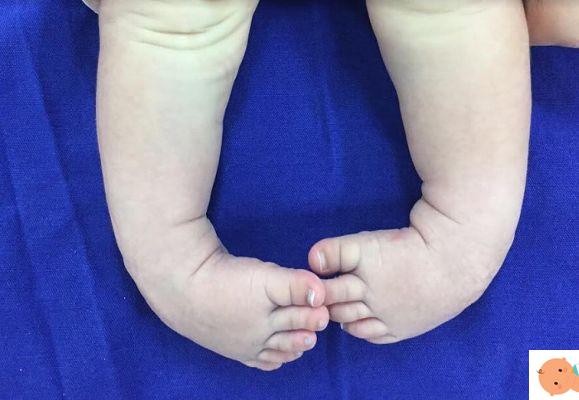 Clubfoot: what it is

The clubfoot it is one of the most common congenital malformations of the bones and joints of newborns (1 in a thousand births) that affects boys more than girls. At birth, in practice, one or both feet appear rotated inwards.

The causes are not yet well known, but genetic alterations that develop during the 12-16th week of pregnancy are thought to play a major role.

If the problem does not emerge with prenatal ultrasound, the diagnosis is made immediately after delivery. And the timeliness of the intervention is fundamental: if not treated or treated adequately, in fact, this disease can cause severe physical disabilities and psychological discomfort.

“It is very important, however, to reassure parents because the properly treated child will be able to lead a normal and active life” reassures Marco Carbone, head of the complex structure of Pediatric Orthopedics at Burlo di Trieste.

"In fact, given the high incidence of the disease, represents one of the workhorses of the orthopedist: in fact, a child every three minutes in the world is born with a clubfoot ”explains Gaetano Pagnotta, head of congenital diseases of the skeleton of the Child Jesus of the city and vice president of Sitop (Society of the Paesena of Orthopedics and Pediatric Traumatology).

"Today the best therapy is considered the Ponseti Method" specifies Carbone, because it is a non-invasive procedure which, as the WHO certifies, has a 98% success rate. "Treatment is all the more effective the earlier it starts, even in the first days of life." It consists of a series of delicate manipulations by the doctor, followed by the application of a series of plasters, to be replaced approximately every 7-8 days, which progressively manage to correct the deformation.

Usually a minor surgery, which lasts less than ten minutes and requires no stitches (a half-centimeter incision is sufficient), to stretch the Achilles tendon. Immediately afterwards, an additional plaster is applied for three weeks, and then the treatment continues with a brace (two shoes joined by a bar) that the child will have to wear initially day and night and then only at night up to about 4 years old.

"The use of the brace is necessary to maintain the correction and avoid recurrence: that is, that the deformity recurs" explains Carbone. "For this reason - Pagnotta reiterates - the treatment does not end as soon as the child gets up, but the use of the night brace must continue until approximately 4 years old".

"Even the traditional treatment - he adds - consists in the very early application of plaster casts but involves the use of more extensive and invasive surgical interventions, with the risk of adhesions, the formation of internal scars, and with the risk of a foot rigid and contracted. For this reason the Ponseti method is considered the best therapeutic choice ".

Centers in Del Paese specialized in the treatment of clubfoot

Here are some centers, in Del Paese, specialized in clubfoot treatment with the Ponseti method:

add a comment of Clubfoot, what it is and how to treat it