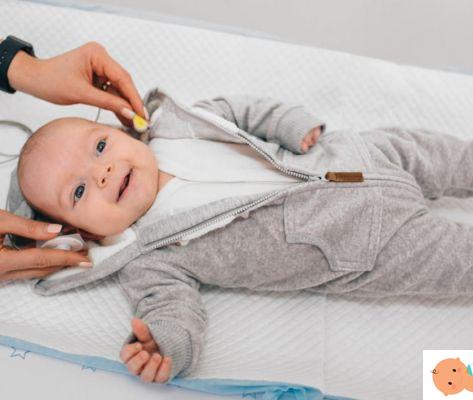 When you are expecting a baby, there are many fears, right from the moment of the positive test. The nine months pass waiting for each new one echography with bated breath, but sometimes even birth can reserve nasty surprises. Among these is the congenital deafness, a disease that is discovered only after delivery and that can worry new parents a lot. Let's see what it is.

What is congenital deafness

congenital deafness means the sensorineural hearing loss. The child, in most cases already at birth, does not hear from a ear or both because of one dysfunction of the inner ear or of the auditory nerve (or both). This type of problem affects one in every thousand newborns, a rather large percentage of children, therefore.

How is congenital deafness discovered

La congenital deafness it is a pathology that many times is already present in the birth, and is early detectable thanks to a test of screening methods which is carried out on Infants. This test intercepts the acoustic emissions, and has the purpose of verifying whether the little ones hear us or not. To do this, there is a special instrument that, through a probe, records the sounds emitted by the cochlea, that is the internal organ of the ear. An alternative is the i test Auditory evocative potentials, which measures brain activity in response to sounds.

Read also: My son, completely deaf at birth, is today a "deaf man who hears us"

When to do hearing screening

The test to detect any deafness it should be done as soon as possible, especially to be able to treat it adequately and not to compromise the development of language. As we said, most of the cases of hearing loss is already present at birth, which is why many times the test it is carried out already in the first days of life. In other cases, it is screening methods it is expected within the year of age, even if there are no reasons that suggest deafness.

There are several reasons why a child can develop congenital deafness. There are factors hereditary and / or genetic, which represent 50% of cases, but also external factors, which are basically the other half. Among these, an important role is played by infections transmitted in the mother's uterus, and the most frequent is Cytomegalovirus, while less impacting appear to be Rubella and Toxoplasmosis. Some children, on the other hand, develop congenital deafness during first days of life, often following consequences or treatments due to severe infections.

Read also: Our son is deaf. With our love, his path will be downhill

In cases where you suspect a possible congenital deafness, usually i test are carried out already in the first days and therefore i symptoms are anticipated. Sometimes, however, in the absence of screening precoce, it is the observation of the child in the first months of life that gives rise to the doubt, and in particular the absence of reaction to auditory stimuli: does not turn, does not react to the call and, later on, does not develop the language.

How is congenital deafness treated?

There are many types of treatments for congenital deafness, be it serious or only partial. In cases where it is not complete, some can be applied hearing aids, that is of the amplifiers of sound that stimulate the functioning cells of the cochlea. In the case of hearing loss is instead total, they exist coclear implantsi, of the devices inserted in the inner ear that act as stimulators for the fibers of the auditory nerve.

La congenital deafness it is a pathology that affects about one newborn in a thousand, and which can depend on factors genetic or external, often unpredictable. Hearing loss can be discovered early with simple ones test administrable already in the first days of life, and the early diagnosis is the best way to increase your chances of feel for those born with congenital deafness.

add a comment of Congenital deafness: causes, symptoms and treatments