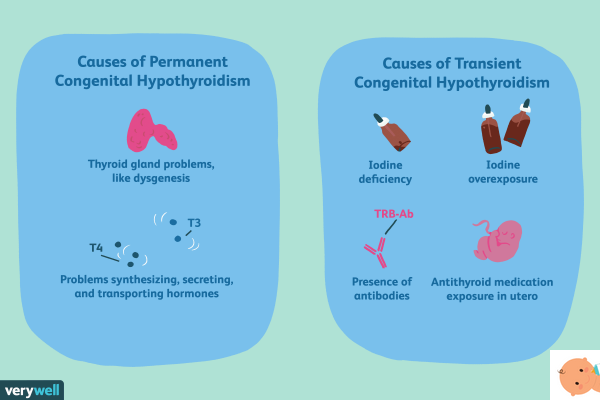 L'congenital hypothyroidism ("congenital" because it occurs at the birth of the baby) is the most common cause of preventable mental retardation.

Caused by insufficient production of thyroid hormones during the early stages of development, it can cause a lot of damage to organs and systems. In particular, in the absence of timely replacement therapy, congenital hypothyroidism affects the nervous system, causing mental retardation.

Adequate hormone replacement therapy, of simple administration, helps prevent such damage provided it is implemented in the first weeks of life.

To have an early diagnosis in all advanced countries it has been done for several years thyroid screening in the first days of life: this has made it possible to radically change the fate of children with congenital hypothyroidism. In our country, the program that provides for this screening began in the seventies and was subsequently introduced by law in 1992 (National Law No. 104 of 5/2/1992).

Often the manifestations of congenital hypothyroidism are mild or not present, while the more specific symptoms develop only after several months. These include:

Read also: World Thyroid Week: how we are put in iodine supply

Le permanent forms of congenital hypothyroidism they have a multifactorial and polygenic origin (linked to genes).

In the majority of cases (60%) these are alterations in the formation of the thyroid gland during embryonic development (disgenesis). On the other hand, congenital hypothyroidism is caused by the lack, genetically determined, of enzymes necessary for the production of thyroid hormones (disormonogenesis).

La thyroid dysgenesis is sporadic, while the disormonogenesis it is hereditary, with a 25% risk of recurrence in siblings. Permanent forms of congenital hypothyroidism due to a congenital hypothalamus-pituitary deficiency are much rarer.

Le transient forms of hypothyroidism congenital are essentially due to:

As for excess iodine, the use of iodine-containing skin disinfectants at delivery and the use of iodinated contrast media during pregnancy are common causes of transient hypothyroidism. Therefore, the thyroid stops functioning and does not produce thyroid hormones until the excess is disposed of. Lack of iodine in foods during pregnancy can also cause predominantly transient forms of congenital hypothyroidism.

The passage of maternal antibodies also leads to transient hypothyroidism. These antibodies can be present in mothers with autoimmune thyroid disease (chronic lymphocytic thyroiditis, Graves' disease). Drugs used in neonatal intensive care, such as steroids or dopamine, as well as the use of antithyroid drugs (methimazole and propylthiuracil) that are able to cross the placenta can cause transient hypothyroidism in the newborn.

After birth, it is difficult to detect congenital hypothyroidism because the symptoms present may be non-specific or completely absent.

It is possible to diagnose it through the biochemical determination of the thyroid-stimulating pituitary hormone TSH (above normal in cases of congenital hypothyroidism) or in association with the dosage of the thyroid hormone T4.

Methods have been developed that can determine the level of these hormones on very small quantities of blood taken from the heel and absorbed on paper.

The withdrawal must be performed in the first 49-72 hours of life.

The treatment of choice is the levo-thyroxine. The recommended starting dose is 10-15 milligrams per kilo of weight per day (mg / kg / day). The therapy should not be administered together with substances that inhibit its absorption such as iron, calcium, soy milk.

The goal of therapy is normalize the value of the thyroid hormone FT4 to avoid neurocognitive alterations due to the prolonged insufficiency of thyroid hormones in the early stages of development.

The effects of the cure must be checked in the first months of life with frequent blood tests to assess FT4 and TSH levels, ensuring the child has adequate physical and neurological development. In permanent forms of congenital hypothyroidism, therapy must be taken for life.

Read also: Female infertility, when the problem is the thyroid

TAG:
Isofix, what it is and how it works ❯

add a comment of Congenital hypothyroidism, symptoms, causes and treatments