Congestion risk, can children take a bath after eating? 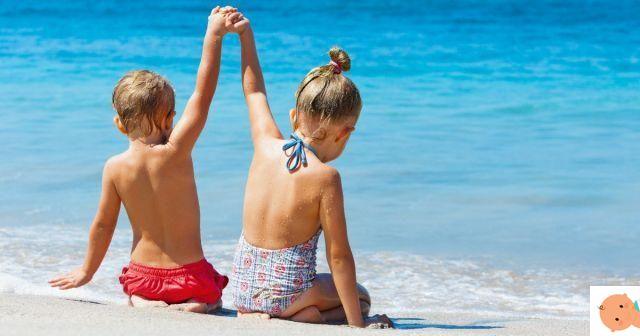 With the summer just begun, the classic parental doubt returns: can children swim in the sea or in the pool after eating?

In fact, there are guidelines that indicate a clear cause-and-effect relationship between full stomach bath and drowning, official indications or recommendations by scientific societies or health organizations and there are those who call for maximum freedom in this regard. but yet many experts suggest caution and the use of common sense, Because the risk of congestion is possible and the consequences could even be serious.

What is digestive congestion?

It is a blockage of the digestive processes that occurs when the body is exposed to a sudden drop in temperature.

In practice, after eating, the intestine gets to work to absorb the nutrients from the foods ingested: to do this, it draws blood from other parts of the body, through a mechanism of vasodilation in the intestine, which is accompanied by vasoconstriction at the level peripheral. The result is that while more blood arrives in the abdominal area, in other regions of the body (including the brain) a little less may arrive.

In other words, the blood is concentrated in the stomach area during digestion.

A sharp jump in temperature, such as occurs when diving into cold water or drinking an iced drink, could interfere with this process and impair blood circulation. This is because, to remedy and keep the body temperature constant, the brain draws blood to itself, with the effect that the digestive process is interrupted and circulatory disorders, abdominal cramps, nausea, vomiting and even, in the most serious cases, loss of consciousness.

The problem - many argue - is that if you are in the water in these conditions you could risk drowning, or because in the case of cramps and pains maybe you panic, or because of the loss of consciousness.

On the other hand, there is no danger if the child is limited to playing on the water's edge (obviously taking into account the appropriate precautions regarding exposure to the sun).

Read also: At the beach with children

Is it bad to take a bath after eating? There are few scientific studies on the phenomenon

On the surface, the scientific literature on the phenomenon seems reassuring.

For example, the World Health Organization includes many other reasons such as drowning risk factors. And, underlining that children are among the subjects most at risk of drowning, he points out that leaving them alone near the water, without the watchful eye of any adult, can seriously jeopardize their safety, at the sea or in the pool.

Even the Academy American Pediatrics recommends never leaving children alone, not even for a moment, near water, remembering that close adult supervision is the best way to prevent children from drowning. And given that not knowing how to swim is another factor that increases the risk of mishaps in the water, The Centers for Disease Control and Prevention rather recalls the importance of learning to swim very early, precisely because it can reduce the risk of drowning among children.

Nutrition and risk of drowning: there is no evidence

Returning to congestion, according to a review published a few years ago by the American Red Cross, the available studies show no evidence that simply eating before diving into the water can increase the risk of drowning.

A conclusion endorsed by an official statement from the International Life Saving Federation (number 18: Eating before swimming), according to which, although the fact of having eaten may be associated with nausea, vomiting and abdominal pain once in the water, it is not a cause-and-effect relationship between these phenomena and the risk of drowning has never been demonstrated.

Children on the beach: 10 tips to protect them

Sun and sea air are good for children, who can finally play and have fun freely on the beach. But you have to follow some simple rules, to enjoy the benefits ...

The same statement, however, acknowledges that the issue has so far been little investigated. The studies available are few, old (generally conducted in the sixties and seventies), often indirect. And in any case referring to adults and not to children.

For this reason, many experts - such as Antonino Reale, head of emergency pediatrics at the Bambino Gesù Children's Hospital of the city, Luigi Greco, family pediatrician in the city and vice-president of the Del Paesena Society of paediatrics and Giovanni Poggi, head of the clinic Meyer's pediatric complex pathologies of the city, which mymodernparents.com consulted for this article - prefer a approach of caution and prudence and invite parents to respect some simple rules, even at the cost of putting up with some pouting from the child. But starting from common sense to avoid big binges on the beach, so as not to have to postpone the much-needed bath for too long.

The basic indication is well known: wait for digestion to finish before diving into the sea or swimming pool. The ideal is to wait one to three hours, depending on the meal consumed.

Obviously - and here common sense comes into play - the lighter the meal, the less time it takes to digest it. The heavier the meal, the longer it takes. So, if children are lively and always eager to get in the water, why burden them with greasy and elaborate meals? Better to avoid dishes that are too rich and seasoned (pasta with meat sauce, eggplant parmigiana, very stuffed sandwiches) and prefer instead small portions of light dishes that give energy without engaging the digestive system too much (a mixed salad, a piece of focaccia, a raw tomato pasta, a small grilled fish fillet).

Other examples: for the digestion of the classic Del Paesena breakfast, with a cup of milk and biscuits or rusks with jam, it takes about two hours, while for a snack based only on fruit or for an ice cream, an hour is enough. It should also be borne in mind that fish is digested much faster than meat. And even more so that carbohydrates metabolize faster.

What to eat on the beach with children: 13 tips

Lunches and snacks consumed outside the home, by the sea, in the shade of pine trees or, for the more daring or those with older children, even under an umbrella. What to eat ...

On average, the stomach emptying time is about two hours. If, when the stomach is still full because the food has not passed into the intestine, there is a sudden change in temperature, either for an iced drink or for a dip in the sea, then there is a risk of congestion.

2 - Beware of sudden changes in temperature

The main problem, we said, is the sudden change in temperature that occurs when, from the possibly very hot beach, you dive into waters which, although not frozen, are clearly colder. Even in this case, therefore, common sense applies.

What about a hot bath after eating?

At home or away, no danger in taking a hot shower or bath, even while digestion is ongoing. At the beach or in the pool, it can be a little less taxing than usual if the water is rather hot and the meal was light: in this case there should be no major problems letting the child take a little bath. Always near the shore is always diving by gradi, wetting the extremities first, then the tummy and so on.

Of course, watch out for cold drinks: even a full sip of ice water, perhaps after playing and sweating in the sun, can cause congestion.

3 - Better not to go too far from the shore

Another common sense rule is to do not take baths where it is not touched: it is much easier to notice an illness and to intervene if you are close to the shore. In any case, small children and those who have not yet learned to swim should never be left alone in the water, whether in the sea or in the pool. We remember that the risk of drowning is also possible in shallow waters.

What to do if congestion occurs?

If symptoms of congestion occur, it is appropriate take the baby to a cool and ventilated place, for example under an umbrella or a gazebo or in the shade of the bathhouse, make him lie down and lift his legs, so that the blood flows to the brain, while keeping the belly protected from the cold, in order to re-establish the correct thermal situation at the abdominal level.

The main symptoms of congestion are:

Only in cases of pre-drowning may it be necessary to practice cardiopulmonary resuscitation maneuvers e alert 118; the rescue personnel of the bathing establishments are trained for this type of intervention, but it would be ideal if the parents also attended first aid courses, where basic resuscitation techniques are taught and which can sometimes be of fundamental importance.

Conclusions: it is always better to be cautious

Although there are no official guidelines on the topic of "bath after eating", if waiting at least three hours before diving into the water seems a typical Del Paesena recommendation (elsewhere we talk about having to wait an hour) and even if the (little) scientific literature on the subject seems reassuring, it is always good to have a prudential attitude. The possibility of an illness is there and, if this occurs, there could also be serious conditions.

To avoid problems, just follow some simple rules that we have read above, such as waiting for the end of digestion (especially for fatty and elaborate meals, which in any case would be better to avoid if you want to spend a day at the beach), prefer light and easily digestible meals, avoid excessive changes in temperature, for example by delaying the bath if the water is very cold and by soaking gradually, especially after playing on the beach in the sun to get the body used to the temperature (but also beware of iced drinks ) and always pay close attention to children in the water.

Wrinkled fingertips: do you need to get out of the water?

And one more curiosity. The fingertips are not an indication of "bath too long, it's time to go out otherwise it hurts". According to the most popular hypothesis, wrinkles are formed because the superficial layer of the epidermis increases in volume by absorbing the water molecules and to manage this bulge it ripples. Another explanation, on the other hand, attributes those little folds that form on the hands and feet when soaking in water, to a process of vasoconstriction, that is, to the fact that the vessels and capillaries of the dermis shrink. In any case, you shouldn't run out of the water.

The term congestion (in children and beyond) is commonly used to define a digestive block (intestinal blockage from cold or stomach congestion).

The main cause of congestion is a strong temperature change that occurs during digestion.

How to prevent the risk of congestion in the child?

add a comment of Congestion risk, can children take a bath after eating?